MASTERING THE BEAST by Tina Donahue and a Giveaway! 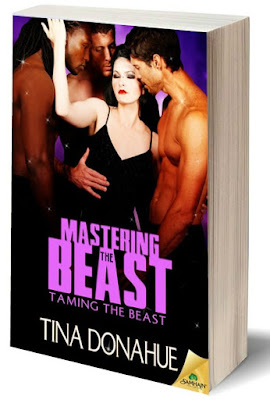 Surrender is the only option she desires.

No one believes that under the tough attitude and schoolgirl fashion sense, reformed
demon Zoe burns for a man, love, and sex. She keeps those urges on ice and well hidden.
She sold her soul for a guy once, and all it got her was a one-way ticket to Hell.

Her job, keeping supernatural creatures in line at From Crud to Stud, is all work and
no play. Until she’s saddled with a trio of new enforcers who ooze so much sexual heat she’s
afraid to be on the same planet with them.

Stefin, Anatol, and Taro try to contain their laughter as their adorable new boss tries
to lay down the law. Apparently, no one told her they don’t take orders. They give them.
And they’re determined to smooth her rough edges and tame her beast with acts so wanton
they’ll make her scream—for more.

Talk about all hell breaking loose. Surrender won’t come easily, but given their devilish
charm and her aching need, her journey to submission is one done deal.

Warning: Contains an unholy trio of demons who don’t like to take turns. Break room…
snacking. After-hours…training sessions. In other words, a sensual ride on the pleasure express. Features m/f/m/m sex in every flavor except vanilla. Bring. It. On.


I’m offering one winner her (or his) choice of FIVE of my backlist ebooks – full-length, bestselling, award-winning, from this list (25 choices):