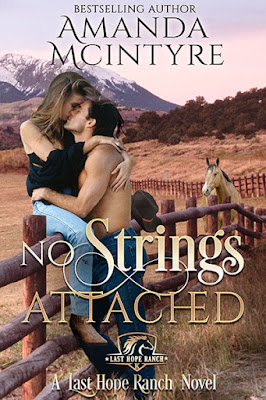 Please welcome guest romance author Amanda McIntyre who has brought giveaways with her!


My thanks to my cowgirl, Lexi, for inviting me over to share a bit about my latest, contemporary western release—NO STRINGS ATTACHED (Book I, Last Hope Ranch)
This spin-off of the Kinnison Legacy trilogy set in End of the Line, Montana follows on the demand of readers wanting more stories from the characters in my sleepy little fishbowl town of rugged men and the women who will tame them. So without further delay-
WELCOME BACK TO END OF THE LINE, MONTANA!
Come by for a visit, we think you'll like it here!
Sally Andersen has spent her life teaching school kids and being a caretaker for her ailing father. Alone after five years, she sees her friends marry and start families and decides she, too, wants a family... just not in the conventional way.
Serving overseas left Clay Saunders with no leg, PTSD, survivor guilt, and more pity than he wants. Recuperating at the Last Hope ranch at the insistence of his old friends, the Kinnison brothers, he is asked to take part in a charity bachelor auction by the little town's fiery, redheaded music teacher. What Clay doesn't expect is the hope of a normal life that sparks inside of him at her unusual request...
She wants a baby. NO RULES. NO COMMITMENT. NO STRINGS ATTACHED.
Excerpt from No Strings Attached. Book I (Last Hope Ranch) 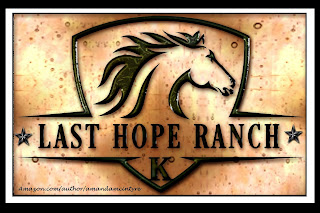 “I want to have a baby.” Her gaze was steady.
He’d tiptoed his way through a minefield or two in his time—he could handle this. He reached for a towel and wiped his hands, proceeding cautiously. “Yeah, I saw the brochures.” He glanced over her shoulder and saw the rest of the ladies seated in the other room, busy talking.
“No, what I mean is…I really hadn’t given this much thought—you know, about asking somebody to help me.” She looked away as though piecing it together in her brain. “I could pay you a fee, of course, and there would have to be some legal issue—a contract.
Whoa. Contract? Clay suddenly felt the need for a drink. He opened one cabinet and then another. Surely Jerry kept a stash of whiskey around, if only for cooking.
“What are you doing?” she asked.
“Looking for the whiskey.”
“Jerry’s a beer drinker,” Sally answered.
“That’ll do.” He continued to check every cabinet and shelf in the kitchen.
“You think I’m crazy.”
It wasn’t really a question. More of a statement of fact as presented—he just happened to agree. “Bingo.” He leveled her a look, then went back to his quest.
She walked toward him and he had the strongest urge to grab a rolling pin. But a greater battle roiled inside him. His libido was on fire, ready to sign on the dotted line, but common sense cautioned him to keep his dick as far from her as possible.
“Look, it’s not like I’m asking you to commit to anything.” She scooted her fine little ass on the wooden stool and crossed her legs. “You know; it was really that kiss that got me to consider this idea.”
Good to know she’d been affected. Crazy train wasn’t exactly the response he’d planned on.
“It’s perfect,” she continued. “You have no ties here. I assume you’re not planning on staying since your only family is out in California.”
Clay stared at her, trying to decide if the woman was certifiable or simply delusional. Did he look like the kind of guy who could walk away from his own child? “You don’t know anything about me.”
Her face lit up. “I know, that’s why it’s perfect. I don’t really need to know much. I already know you’re kind to animals, patient with kids, you’re a hard worker, former military, good in medical emergencies, and you can cook.” She lifted her palms. “What more, other than your health, do I need to know?” She eyed him. “And from here you look pretty damn healthy.”
Clay blinked, waiting for his brain to catch up with his good sense, which kept tripping on his libido. He felt like a damn racehorse, and if she asked him to smile— “Look, Sally. I’m flattered, really. But they have places—clinics—I’m sure they’re mentioned in the brochures. Places where guys can donate—”
“Sperm, Clay,” she interjected. “And yes, I know. I’ve done the research. Crunched the numbers. And honestly, the bottom line looks grim. My insurance covers only the initial exams and tests. The rest of it I would be financially responsible for.” She held his eyes for a moment more, then slapped her hand on the table. “You know, you’re right. It’s a crazy idea.” She hopped off the stool. “Forget I mentioned it.”
BUY NOW AMAZON  http://amzn.to/1TQNsJq
ENTER TO WIN! FOLLOW ME ON AMAZON  http://amazon.com/author/amandamcintyre
For the chance to win a $10 Amazon gift card! Runs March 27-29.
a Rafflecopter giveaway
Posted by Lexi Post at 7:00 AM