Delicious Heroes and Their Spaceships: Tracy Cooper-Posey with a Giveaway! 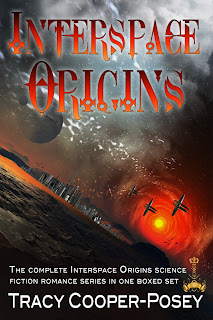 Delicious Heroes and Their Spaceships

I have a reputation for writing paranormal romance that has a tendency to spontaneously combust.  Readers who are aware of that reputation sit back in their chairs and blink when they hear that I’ve published a story that doesn’t feature vampires or hot sex.

In fact, I write just as much non-vampiric fiction as I do the heated kind.  Most of the awards I’ve won, including a national writing award, were for romances that didn’t feature fangs.

Of course, that is all complete baloney.   In fact, the first science fiction story ever written was Frankenstein, written by Mary Shelley, who had neither a science background nor an advanced degree.

There’s a ton of science fiction out there not written by scientists.  Star Trek, Star Wars, Battlestar Galactica – any my latest obsession, The Expanse…there’s so much really great science fiction these days!

Did I leap upon the new sub-genre with cries of joy?  Well, no.  It took me a few years of circling about the sub-genre and edging closer before I could get over my younger self’s inhibitions about writing SF.  Finally, I simply ran out of excuses, grit my teeth and leapt.  In November 2015, I published my first SFR novel:  Faring Soul.

I had a blast writing it.  I knew as soon as I’d finished the first book that I was going to write more.  Much more.

In January 2016, Faring Soul was given a SFR Galaxy Award for “Most Intriguing Philosophical/Social Science Questions in Galaxybuilding”, and in November this year I published my eighth SFR novel and have still more planned.

None of them, by the way, feature vampires or in-your-face sex, although the heroes are just as delicious.

The Interspace Origins series is the first SFR series I wrote, of which Faring Soul is Book 1.    For Christmas this year, I brought out the full series as a boxed set, Interspace Origins, which offers a 40% discount on the cost of buying all three books separately. 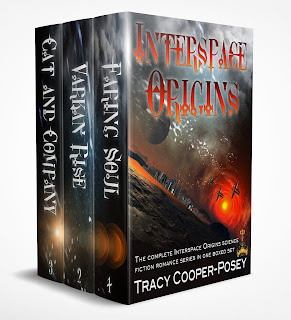 Follow the adventures of Catherine Shahrazad, possibly the oldest human in the known galaxy, and her gifted pilot, Bedivere X, as they return to Federation Space from the vast and unknown fringes. Cat’s history and her presence have caused riots in the past. What will happen this time? Why is Cat back?
Let yourself binge on this award-winning series.
Book 1:  Faring Soul
Book 2:  Varkan Rise
Book 3:  Cat and Company
___

Two minutes later, Catherine dropped into the navigator chair that Bedivere usually used and let out a long heavy breath. She put the hard case on the console and patted it.

Bedivere, who was sitting in the pilot’s chair, looked up from the instrumentation and grinned. The laugh lines around his warm brown eyes crinkled. “So...it went about exactly the way we expected. We’ll be in clear space in three minutes, by the way.” His brown-gold hair glowed in the light emitted from the overhead console. The warm color was nothing like the muddy color of native Shantans.

Catherine leaned back so her head was resting on the headrest and blew out another breath. “Nothing ever comes easy,” she muttered.

She rolled her head to the side and looked at him. She was too tired to smile. “Despite the rhetoric that surrounds my much-maligned past, I happen to like the quiet life.”

Bedivere sat back as she was. “Liar. If you liked it that much, you would live quietly. I don’t remember the last time you stopped to smell the roses.”

“Too much to do,” she muttered, glancing at the case.

The silence stretched and she looked at him. Bedivere was studying the case, too. He caught her gaze and looked back at the case again. “Next stop is Federation space,” he pointed out. “If you really do want a quiet life, Cat, this is the time to shut down the engines and go mute. There won’t be any going back after this.”

“Of course we’re going,” she said sharply. “I haven’t spent seventeen years scraping together every last centavo the fringes could cough up just to go live on some ball somewhere and get even older.”

“We don’t have to do this. All we’ve lost right now is time and that’s an infinite resource. If we head into Federation space, then much more than time is at stake.”

“Just shut up right there,” she said sharply and spun the chair to face him properly. “Look,” she added, reaching for a reasonable voice and tone. Reason would always win out with Bedivere. Logic was the supreme argument. “I have to go back to the Federation, anyway.” She touched her hair, which was liberally streaked with grey. The red that had been a rich, deep color was now faded. “You understand the therapy even better than I do. You’ve read even more widely and you never forget anything. You know that rejuvenation revives more than the cellular structure. I’ll feel young again. I won’t be this cranky old woman who has seen too much, has wrinkles on her neck and aches in the morning when she gets out of bed. After, I’ll be sweet and reasonable and even more determined to see this through.”

“If we stay in the fringes, the Shantans will come after us with everything they’ve got. But they won’t pursue us into Federation space and risk their membership on the Board. So we have to go there. It’s the Federation or bust.”

Bedivere considered that, then nodded. “As long as you’re not doing this for me.”

“Don’t be stupid,” she said and turned the chair back to face the console, to prep for the gate jump. “Of course I’m doing this for you. What else are partners for?”

He didn’t argue anymore, because the ship was technically a four-man crew ship, so jump prep took all their combined attention and effort. But the little smile at the corner of his mouth didn’t go away.
___

Praise for the Interspace Origins series:

I know Tracy is a great writer but I was not much into science fiction. Well, now I am!!

I loved Catherine Shahrazad, who is a strong, in charge female.

I'm amazed by the creativity of not only the characters but the detail of sights, sound and interaction.

If you have read any of Tracy's other books you know what awaits you....sheer reading pleasure.

This is truly science fiction at its best.

Special draw for Happily Ever After Thoughts readers:

Leave a comment below, telling me why you like--or think you would like--science fiction romance.  I’ll draw a random winner, who will receive the complete boxed set.  If the winner has already bought the boxed set, I will refund the price. 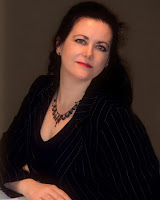 Tracy Cooper-Posey is an Amazon #1 Best Selling Author.  She writes romantic suspense, paranormal, urban fantasy, futuristic and science fiction romances.  She has published over 75 novels since 1999, been nominated for five CAPAs including Favorite Author, and won the Emma Darcy Award.
She turned to indie publishing in 2011. Her indie titles have been nominated four times for Book Of The Year and Byzantine Heartbreak was a 2012 winner.  Faring Soul won a SFR Galaxy Award in 2016 for “Most Intriguing Philosophical/Social Science Questions in Galaxybuilding”  She has been a national magazine editor and for a decade she taught romance writing at MacEwan University.
She is addicted to Irish Breakfast tea and chocolate, sometimes taken together. In her spare time she enjoys history, Sherlock Holmes, science fiction and ignoring her treadmill. An Australian Canadian, she lives in Edmonton, Canada with her husband, a former professional wrestler, where she moved in 1996 after meeting him on-line.