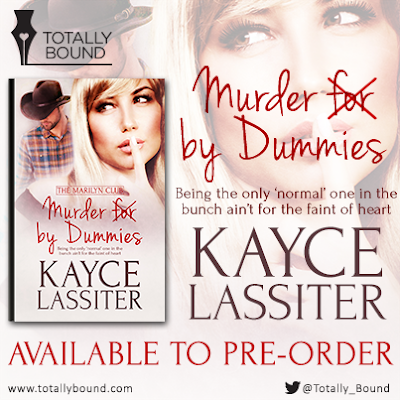 Shouting it from the rooftops…Book One in the new Marilyn Club Series, Murder For By Dummies, is available for pre-order NOW!!!

Yes, that means right now…at this very moment.  So be sure you follow this link and order your copy TODAY from the Totally Bound website.

Anyone who orders a copy of Murder For By Dummies during this pre-order period will be able to do an early download on July 18, 2017.  So, go…don’t delay…HURRY…order your copy now and get the download before everyone else when it goes live for general ordering at all major online retail outlets on August 15, 2017.

AND...Don't forget to VOTE for this cover in the Affaire de Coeur annual cover art contest.  You can vote once each day between now and 7/15.  So go vote now, and then come back and check out the excerpt below…ENJOY!

Murder For By Dummies
Kayce Lassiter

“Maybe she wrote the letter before she died.”

“Yep, she was probably still alive when she wrote it.”

“Probably?”  I groaned as a headache started to thump at the base of my brain.

This is going nowhere.

My dad didn’t always make sense on a good day.  The fact that he thought his sister was dead wouldn’t make this one of his good days.

Am I really having this conversation?

I mentally groaned.  And from the office, no less.  Freaking painful, but I’d get further if I just went along.

“Okay, Norman,” I needed to roll with the flow, “how did she die, and where is she?”

“Where is she?”  I shouldn’t be short with my dad, but he could be so trying at times like this.  Communication wasn’t his strong suit.

Hell, he doesn’t even have a strong suit since the accident.

When he didn’t answer, I went back in for another shot.  “Daddy, where is Aunt Beatrice?”

My father, for some unknown reason, always said he preferred it when I called him Norman.  But through the years, I’d found “Daddy” worked best when I needed him to focus on what I was saying.  I’d long suspected it was the name he secretly treasured, so I saved it like an ace-in-the-hole for when I really needed it, despite his protests.

I closed my eyes to keep from screaming.

The quiver in his voice was a sure sign he wasn’t as steady as he tried to make me believe.
My father had been an insurance salesman for many years, but retired when he sustained a serious head injury in a car accident the summer after I moved to Tucson.  For the most part, he functioned okay and got along well in the small town he lived in, but often drifted into a fantasy world where he claimed to be an ex-DEA agent.  Everyone in town knew of his injury and loved him, so they went along with his fantasies and sometimes humored him more than they should.

His best friend these days was a chimpanzee named Chaz. Someone had dropped the creature off at the farm well before dad’s accident.  He’d taken to the creature immediately, but now delighted in telling everyone Chaz used to be his partner in the DEA.
I took a deep breath to calm myself and tried again, “Daddy, tell me where Aunt Beatrice is.”

“In her rocking chair?”  My mind reeled as I skimmed through all the possibilities.  “Are you sure Aunt Beatrice is dead?”

Aunt Beatrice was my father’s sister and he lived with her on the family farm where they grew up.  My mom died of lung cancer shortly before my fifth birthday, so Dad and Aunt Bea raised me, along with half the children in town.  They were always taking in strays, whether they had two legs or four.

Sounding like a man discussing the weather, he nonchalantly replied, “She’s dead all right.  I’ve seen dead before and she’s definitely dead.”

“Oh, Beau.  He stayed at his girlfriend’s house last night.”

Fine time for my brother to find a girlfriend.

I didn’t want to know the answer, but I had to ask, “Daddy, how long has Aunt Beatrice been sitting in her rocker…dead?”

“Let’s see.  She was there yesterday, but I don’t think she was dead.  No, I remember she was crocheting, and we talked a bit.  So, she must’ve been alive yesterday, or was it the day before?  Hmmm.  No, I think it was yesterday.  Yes, definitely yesterday.  She must’ve died today then…I think…maybe.”

Could this be any weirder?

Frustration and panic had me by the throat as my stomach clenched.  Suddenly, I had an epiphany and decided to come at it from another direction.  “Daddy, think hard.  Is Aunt Beatrice wearing the same clothes she had on yesterday when she was crocheting?”

The silence stretched on forever.  Finally, I prodded, “Do you remember what Aunt Beatrice wore yesterday?   Pants?  Overalls?  A skirt?  Can you remember?  Is she wearing the same clothes?”

“That’s a lot of questions, Lumpy.”  His voice was agitated.  “I can’t answer all those at once and I can’t think with you poppin’ off questions like they wuz bullets from a machine gun.  Which one do you want me to answer?”

I pinched my lip with my fingers to keep from snapping.  No way would I get a straight story from him.  He was too confused today.  “Okay, Daddy.  Don’t worry.  I’m gonna call Dal and have him come check on you and Aunt Beatrice.  You stay in the house and I’ll have him come out right away.  You understand?”

His voice softened.  “Sure, honey.  Don’t worry.   I’ll take care of Aunt Bea.”  Then, as if someone flipped a switch, he brightened.  “You give us a call when you get to town and Chaz and I will ride in and pick you up.  I love you.”

I pushed hard on the bridge of my nose to ease the pain collecting there.  It would take way too much time and effort to convince him I wasn’t coming home.  I prayed this was just another one of his paranoid fantasies.

Kayce
Posted by Kayce Lassiter at 5:00 AM