Hey gang, it’s me, Kayce Lassiter, and I’m tickled as a speckled pup to be here again.  It’s been a rough couple of months, but I think I’m seeing daylight at the end of the tunnel.  At least, I’m feeling better about it maybe not being a train.  LOL  Hope you all are doing fabulous.  Have I mentioned yet that you are looking quite mahvelous?  Well, you most certainly are!

Anyway, I thought I’d stick my head in and chat for just a bit to bring everyone up to speed on milk.  Yep, you read that right—MILK.  Why?  Because it’s come to my attention that not everyone understands what milk is and where it comes from.  Then, just to complicate things further, there is more than one kind of milk these days…and here’s where things go off the rails when you’re talkin’ milk.

So, pull up a milk stool and take a sit while this daughter of a dairy farmer shares her wealth of useless information.

The trigger for this discussion was when I pulled into a drive-thru donut shop the other day and ordered a plain frosted donut and a carton of milk.  Seemed easy to me.  But au contraire.

The sweet young lady working the speaker asked, “What kind of milk would you like?”

I asked, “What kinds do you have?”  (Thinking perhaps I might have the opportunity to choose between skim, whole, and two-percent.)

The sweet young lady behind the curtain replied, “Chocolate and Vanilla.” 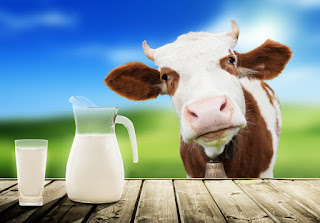 I hesitated a moment, and then replied, “I was actually hoping for just regular old white milk.”

Cross my heart and hope to die, she answered, “Yeah, that’s the vanilla milk.”

I smiled to myself and told her the plain old white milk would be just fine.  Then I pulled to the window to pick up my donut and “vanilla milk”.  Now, I understand that Almond Milk comes in Vanilla flavor, but I wanted plain old milk…real milk, not fake milk, milk that comes from a cow—not an almond, not a coconut, not a vanilla tree.  (And yes, I know it’s actually an orchid…how?...because I have access to the internet…which donut girl must not have.) 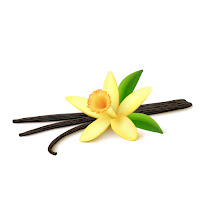 As I pulled away from the store, I wondered if she knew where that “vanilla” milk came from.  Did she know it came from cows and not vanilla beans?  I’ve heard of people who think chocolate milk comes from brown cows, but where must she think vanilla milk comes from?  Vanilla cows?  It brings to mind visions of rows and rows of teeny weeny vanilla beans hooked up to little tiny milking machines.  I wonder how many vanilla beans it takes to get a gallon of vanilla milk.

Okay, say it with me…all together now…milk comes from COWS.  White cows, black cows, brown cows, red cows, black and white cows, brown and white cows…cows of all sizes, shapes, and ages.  Milk is milk, is milk, is milk.  To make it brown, we add chocolate.  To make it pink, we add strawberry.  And to make it vanilla, we would add vanilla extract.  But if you’re talkin’ about “milk”, it originally comes only in white (unless there’s a problem with your cow).  Everything else has been processed to the point where its very nature has changed…it is no longer “milk”…it’s now “chocolate milk”, “strawberry milk”, or…wait for it… “vanilla milk”.

But plain old white milk ain’t “vanilla milk”…it’s just milk, people!  And it’s the only thing that truly is.