Sin and Magic by K.F. Breene


Alexis may have found out she’s more than just a crystal ball psychic, but she still loves her life in the cracks of society between the normal world and the magical world.  And she loves her two wards, Mordecai and Daisy.  And she has a hard time admitting and hiding her love for Kieran, the Demigod and son of Valens, a horrible and powerful Demigod.


Kieran needs Alexis in more ways than one…mostly two ways.  Alexis is the only one who can free his mother’s soul from entrapment (she needs to get her seal skin), and he needs her love.  Of course, it’s something he can’t have to keep her safe from his father. 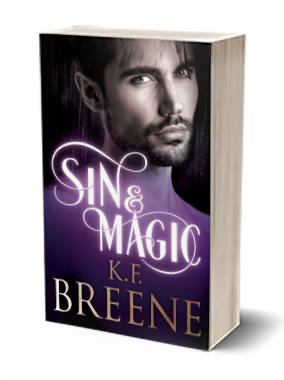 So how can Alexis use her newly found magic to battle Valens to achieve Kieran’s first need for his mother’s soul?  How can Alexis battle her own love for Kieran when she knows it’s safer to stay unknown?


Dressed in her flood pants and other assortment of goodwill clothing, Alexis still makes a scene when she enters the life of the magic. She doesn’t care if she doesn’t fit in, but rather she will take care of business along with her new sidekick, Bria, a necromancer.


Kieran vows to keep her safe, but will that make him deny the one outrageous woman that turns his heart to mush?


This is an endearing story with a lot of wit, strong-minded women, and love that just might be as powerful as the magic.