I am so in love with this story. It's about second chances, redemption, and forging a path when all others are closed off. This book is the 4th of the Loved by Reese series and is a must read! 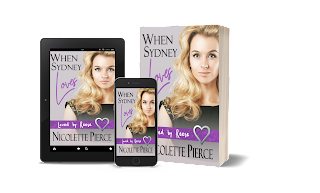 Sydney Reese’s sole mission is to help women shed their painful pasts, but when it comes to her own, she struggles. When Cash is released from prison, he makes an unwelcome appearance. She vows not to allow him to harm her. But when she sees him again, he is both familiar and different. He seems genuine in his apology, but can she trust him?

After being released from prison, Cash quickly discovers his life will never be the same. Not only does he receive cold shoulders and closed doors, he must crawl his way into a meager existence. When he faces Sydney, he realizes just how far he fell and how much pain he caused. He will do anything to make amends with her, even if it means becoming a punching bag for her brothers.

When Cash comes to Sydney’s aid, she slowly begins to forgive him. He thinks he might have a chance at redemption and happiness until everything he has worked for gets yanked from his grasp, including Sydney. He was hoping for a second chance, but maybe not everyone deserves a happy ending.

Find your copy at: Amazon

Want to start the series at the beginning with Rio? Click here!
Posted by Nicolette at 7:00 AM