ONLY NORMAL ONE IN THE BUNCH

Good morning!  Well, I guess if you're on the east coast, it's almost afternoon. But WTH, we're going with my time zone because while I'm late posting this blog, I'm not as late in my time zone as I am by east coast standards. :)  My story!

Well, I've been a busy girl sifting through projects and trying to figure out what to do in what order, how long it's going to take, what skillsets I will need for each, and figuring out where I left off before my sabbatical. But the next project was pretty much a no-brainer...the Murder by Dummies re-release is almost ready to fly.

I got my rights to the story back earlier this year, so I'm re-releasing it as an indie-pub. I've gone through and shined it up a little bit, and built this new cover for it...similar to the original, but a better looking hero and more the style I'd originally hoped for on the fonts.  I hope you like it! 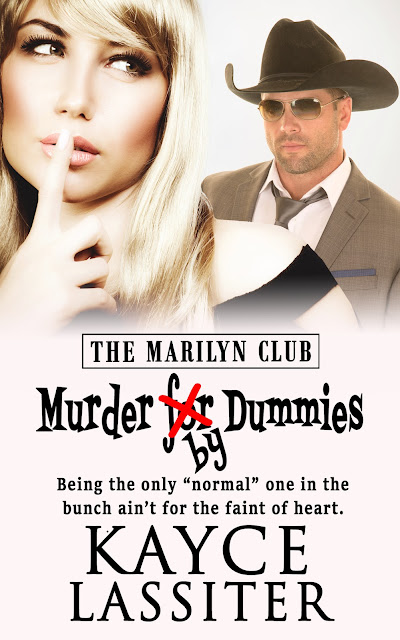 Since the next book I'm working on is Book Two in this same series, I want to give you an overview of each of the books currently planned in this series and a little excerpt from Book One, which will be re-released next week on Thursday, November 10th, with Book Two to follow early in 2023.

The Muensters had their niece, Marilyn.  Buzzard’s Breath has Emily Redfeather.  Being the only “normal” one in the bunch ain’t for the faint of heart.  Emily finds partners in crime in her niece, Brittney Redfeather, and her new best friend, Jo Parker, as the girls work together to sort out the crazies in Buzzard’s Breath, Arizona.  As they try to figure out why dead bodies keep popping up in the most unusual places and under the strangest circumstances, they form The Marilyn Club—a very exclusive club for the “normal”, and a haven of sanity in an otherwise nutso community.

Murder For By Dummies (Book One) introduces us to this insane cast of characters as we watch Emily and Hawk sort out their tumultuous relationship while also trying to figure out what Jo’s aunt Maddie is hiding in the basement of her boarding house.

Dead Men Ride Motorcycles (Book Two) will pull us into the budding relationship between Jo and Dal, the town sheriff, as we ride along on the journey to determine the identity of the dead man found riding a motorcycle on the old carousel in Beau Redfeather’s motorcycle boneyard.

Death In A Doghouse (Book Three) brings love to the doorstep of Brittney and Blake, as the girls try to figure out why a dead body has turned up in one of their dog houses.  The girls have to sort this out because if Blake is somehow involved in the murder, he’s probably not such a great catch for Brittney.

Enjoy this excerpt from Murder by Dummies...releasing on Thursday.

As I pulled around to the side and parked, something scraped against the back window on the far side of the car. I parked, shut off the engine and shifted in my seat to get a good look.

The corner of the tarp I had used to cover the Fifield luggage on the top of the car was loose. I’d forgotten all about the bags up top. I grabbed my purse and hauled myself out of the driver’s-side window. The entire load had shifted and both corners of the tarp hung loose on the passenger side. I counted bags—one was missing.

“Damn. What the hell else can go wrong?” Pushed over the edge one more time by the events of the past twenty-four hours, I kicked the tires and banged on the top of the car with my purse, shouting a stream of obscenities that would’ve made Aunt Bea threaten to wash my mouth out with soap—tough soap. Lava. No Dove for these words.

About the time my tantrum lost steam, the shoulder strap on my purse broke and the bag flopped lifelessly to the ground. I stood frozen, staring at my ruined purse.

What the hell did I do to deserve the last twenty-four hours of my life? And when will it stop? Maybe I should stab myself in the forehead with a fork to make it hurt less.

The sound of a man clearing his throat made me look up. A grizzled, leathery old man in rags sat on top of a picnic table, staring at me with piercing ice-blue eyes. His toothless grin indicated he’d enjoyed my fit of temper.

“Great,” I muttered, “just what I need—an audience.”

The man grinned even broader. “And a fine performance it was.”

I rested my forehead against the top of the doorframe and prayed for patience.

God, do not let me rip this man’s lips from his face. Just get me home without adding murder or mutilation to my long list of problems. Please.

I felt the old man’s gaze on me as he watched my struggle for control. I imagined he was still smiling. For some reason, that annoyed me more than anything else, but he had the good sense to remain silent and I had the good sense not to look.

After a few minutes, I raised my head. Our eyes held for a moment before he spoke. “Looks like you’re having a bad day, young lady. Can I be of assistance?”

I shook my head. “No. But thank you. I lost a bag off the top of the car. I’ll have to double back and see if I can find my stuff.”

The man smiled again and hopped off the picnic table. “Here, let me help you tie this back up, so you don’t lose anything more.”

Goosebumps ran up my arms at his overwhelming generosity. This was the second time today I’d seen the better side of human nature. It almost made it worth the stress I was under.

As my most unlikely rescuer was re-tying the ropes, I climbed in through the window and rooted through the camping equipment until I came up with a roll of black and white zebra-striped duct tape. I climbed out, held the roll over my head and bounced back and forth on the balls of my feet as I took a small victory lap.

“Wooo-hooo. Look what I found.”

My new friend laughed at my excitement. “Yep, that’ll do the trick. This load ain’t goin’ nowhere now.”

With the load rearranged and secured with tightened ropes and half a roll of tape, I thanked the man and ducked into the convenience store. After a quick restroom break, I left the store with two hot dogs and two sodas. The old man was still on the picnic table. His huge smile warmed my heart when I handed him a hot dog and a soda.

“You didn’t have to do that, Miss, but it was mighty thoughtful.”

“Not a problem. I appreciate the help and that you didn’t laugh at me for throwing a tantrum.”

At this, he chuckled. “Some days are like that.” He paused for a moment before he added, “Others are better. Where you headed?”

I stared at him a moment before I a nswered, “Home. I’m headed home.”

He nodded, seeming to totally understand. “Home’s a good place to be when the wheels are comin’ off.”

Stunned he’d plucked the words right out of my brain, I mumbled, ‘Thank you,” and turned toward my car.

My old wreck packed to the headliner, with garbage bags duct taped to the top like a ragged zebra rug was too much. I giggled so hard at the image of it driving down the highway that it took a couple tries to get my leg through the window.

All of a sudden, I didn’t have a care in the world. I waved and hollered as I backed away, “Thanks again for the help.”

I got a smile and a nod from the old man perched atop the table, as he gummed his hot dog and watched me head back the way I’d come.

Well, that's the story on my new release.  It's my story, fun and fantabulous, and I’m stickin’ to it.  Hang on tight now ‘cuz we’re gonna go real, real fast!

Be sure to sign up for Kayce’s newsletter and get a couple of free ebooks at:

Note:  If you already have the free books, sign up anyway so you don’t miss any shenanigans—and be sure to forward the link to all your friends who might want to join us.