Alexis: Hi Nicole. Welcome to Happily Ever After Thoughts.  It’s great to have you here. My first question, because I’m such a lover of Scotland and our readers might like to know, is why do you focus on Scottish romance?
Nicole: I LOVE Scotland. I don’t know why, I just do. Most people who know me know that I get cold easily. And why would I love such a cold, windy and rainy place so much? Something about Scotland speaks to my soul. Maybe I lived there in a past life, or maybe it’s because some of my ancestors are from Scotland. I find everything about it fascinating. To be able to set stories there is like traveling to Scotland in my mind.
Alexis: I know you recently visited Scotland as you have been posting beautiful photos on your blog. What was it like to be there in person? 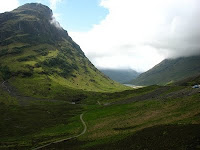 Nicole: Amazing! Sigh. Once we got into Argyll and the mountains it became very blustery with the weather changing every ten minutes from sunny to rainy and windy. My husband, who’d never been there before, was also amazed at both the changeable and extreme weather and the beautiful scenery. Everything was so bright green when the sun came out, and the flowers were blooming in vivid colors. Bluebells grow everywhere, even along the roadsides. But there were a few times when we literally had to battle the elements and struggle to return to shelter.
If you go in May or June (or almost any time of year, really), be prepared for any type of weather. Rain gear is essential, and by this I mean a rain jacket with hood and waterproof shoes. Umbrellas are practically useless in the strong winds. Also bring plenty of sweaters, jackets and a ski hat. 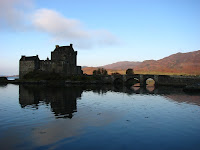 Once you have the appropriate clothing so you’re comfortable, you can brave the winds and rain and see some spectacular places, both the natural beauty of the landscape and the historically significant sites. My favorites of the historical sites are the castles and the Neolithic sites. Scotland is a place that you have to experience to truly understand what it’s like. In places, there are miles and miles of nothing but mountains of rock and heather and red deer. And dark lochs that reflect the sky, whether blue or gray.
One of my favorite quotes about Scotland is this one: 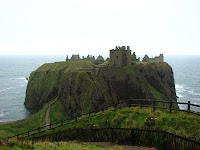 "There is no sunlight in the poetry of exile. There is only mist, wind, rain, the cry of the curlew and the slow clouds above damp moorland. That is the real Scotland; that is the Scotland whose memory rings the withers of the far-from-home; and, in some way that is mysterious, that is the Scotland that even a stranger learns to love". H V Morton, English travel writer, in his classic book "In Search of Scotland" written in 1929.
Alexis: You did a beautiful job describing Scotland. I’d have to agree with both you and Mr. Morton. What a perfect scene for your newest release, Blade of the Wolf.  Can you tell us a little about it?
Nicole: Yes, here is the official blurb.
Blade of the Wolf: Ronan, immortal werewolf and Scottish Sgian Dubh Guardian, faces his most challenging, yet enticing, mission in centuries. He must protect sexy clairvoyant medium Syrena Ellis from an evil incubus intent on stealing her powerful life force. She awakens a raging arousal in Ronan, but if he gives in to temptation, he will be punished.
Dark and edgy, Ronan captivates Syrena. He is hot, hard and in control, yet his scorching glances and sinful kisses tell her he yearns for her. Even though she’s only a job, she finds a way past his iron-willed resistance. She’s determined to explore the depths of erotic passion with him. They’re unaware that their explosive sexual encounters are providing the enemy incubus with heightened energy, making him almost impossible to defeat.
Syrena’s forbidden desire and scorching lust for Ronan could destroy them both.
It is a work of contrasts, light and dark, modern and ancient. Good vs. evil and all the shades of gray between. And it’s an emotional love story between two people who have an intense attraction.
Alexis: Where did you get the idea for this story?
Nicole: Believe it or not, from a couple of songs from several years ago. I’m wild about the movie Daredevil and I’ve always found the music from it very inspiring. Bring Me to Life and My Immortal by Evanescence are the main two songs which inspired this story, but also others from the soundtrack. One of the songs even inspired me when writing the villain.
Alexis: Okay, now I have to rent that movie! What are your favorite character traits of Ronan and Syrena?
Nicole: Ronan, being a Sgian Dubh Guardian and wolf shifter, is incredibly protective. He takes his job, which he’s done for 600 years, very seriously. One would need amazing dedication and mental toughness to stick to it that long. Fortunately he has his clan, the other Sgian Dubh Guardians, for support and friendship. Ronan is also a highly skilled fighter, using martial arts and almost any weapon, especially swords and guns. He is honorable and to break a vow or promise rips him apart inside. He has a wild side and an overactive libido, especially during full moon. He has some amazing paranormal powers aside from his immortality, such as the ability to heal quickly, super-senses, mind-control and anti-gravity.
Syrena is a free spirit and a psychic medium, but she doesn’t know the extent of her own powers when the story begins. She’s a masseuse, a healer, and a violin player. She’s used these to help suppress and channel some of her psychic powers. But she has so much more to learn. One thing I like about Syrena is her vulnerability and how unsure of herself she is. But she isn’t weak. When she sets her sights on Ronan, she’s determined to have him.
Alexis: If I were her, I’d be determined too :-)  I understand this is your first full length romance. Did you find it more challenging or easier than writing a novella.
Nicole: Yes, it was more challenging because it’s three times the length of some of my novellas. It required a more complex plot, a lot more stuff happening. And it took a few months longer to write. But I enjoy writing novels just as much as novellas. With novels you can delve deeper into the characters’ psyches and deal more with their emotional baggage.
Alexis: What can we expect next from you? Do you have any new releases coming or a work in progress?