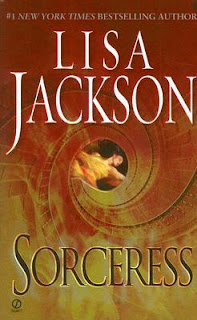 A master of suspense, Lisa Jackson, takes us into the medieval ages of Wales and finds a sorceress, Bryanna, who is budding into her magic along with a warrior of the dark, Gavyn, who is drawn to following her epic journey.

Bryanna is forced into restructuring the magical dagger of gems to save the Chosen One, a mysterious and unknown person.  She travels the corners of England to find the missing gems, which doesn’t sound too dangerous until arrows and guns in the arms of evil, target her path.

Along with the evil followers, Gavyn is drawn to her as she plunders onto his trail.  He watches from the dark of the forest before confronting her vulnerable form of exquisite beauty.

Sparks of lust crackle between the two, yet Bryanna doesn’t want to include Gavyn on her mission. She tries to dodge him, lose him, and forget him, but he has another agenda, which unknowingly includes the Chosen One.

If you’re not sure what novel to pick up next, Jackson creates a masterpiece of suspense, history, and a touch of paranormal in one magnificent plot with vibrant characters who shuttle you through a dangerous endeavor that appears too perilous to end with happiness.