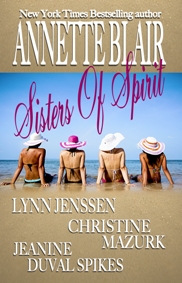 I’m so excited to have New York Times Best Selling Author Annette Blair joining us on Happily Ever After Thoughts. She is giving away a copy of PROPER SCOUNDREL to THREE lucky commenters!

Lexi: Hi Annette, thank you for chatting with us on HEAT. You have written so many subgenres of romance.  Which is your favorite subgenre to write in and your absolute favorite book you have written?

Annette: Not fair. That’s like Sophie’s choice. I find that falling in love with my characters and their story is paramount for me to write a good book, and with 40 books out there, it’s impossible to make a choice. I will say that I am so in love with my story and characters when I’m finishing a book, that it takes weeks to let them go. But I am most excited and falling in love, in that wistful delightfully distracted way, when I’m beginning a new story.

I do enjoy writing my contemporary bewitching romantic comedies.  But I also love a good Regency rogue or scoundrel sweeping his lady fair around the ballroom in a titillating waltz, where hearts are racing and hands where they should rarely be.  And then there are the mysteries and all my friends, ghosts and all, in Mystic, Connecticut.

Lexi: I can understand why it is so hard to choose. I noticed that both HOLY SCOUNDREL and SISTERS OF SPIRIT were just released. Can you tell us which was easier to write and which gave you, hmmm, headaches?

Annette: I wrote SISTERS OF SPIRIT with three very good friends—sometimes all of us sitting around the same kitchen table . . . sometimes writing the opposite halves of the same phone call for instance. We put a lot of ourselves in those novellas and I must say that mine, Moving Pictures, flowed from my fingertips and sometimes surprised me. I’m finding it difficult to let go of Max Peabody and Anastasia Jones. This quarter book/novella was easy for me to write. 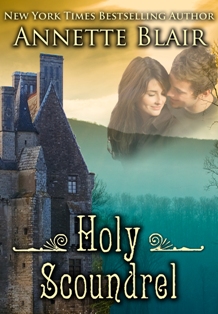 As for HOLY SCOUNDREL, I plotted that Regency Historical in 2001 and before I sold it, I sold my contemporary witches to Penguin Random House, so I left my historicals and former publisher behind around that time. Fast forward eleven years to the age of indie publishing, and seven of my backlist historicals have been rewritten and given a new life: UNDENIABLE ROGUE, UNFORGETTABLE ROGUE, UNMISTAKABLE ROGUE & UNTAMABLE ROGUE. Then there’s SEA SCOUNDREL, CAPTIVE SCOUNDREL, PROPER SCOUNDREL and, oops . . . HOLY SCOUNDREL. I had to dust it off, and finish. I was shocked it was only half there. I thought I had finished it and just needed to polish. Not! I had forgotten the rules of Regency etiquette, titles, wording, etc. I did struggle with HOLY SCOUNDREL because I jumped an eleven-year bridge between genres. I knew what came next, sort of, but trying to figure out what I had in my brain back then was not easy. I was in labor, but it became a labor of love. And I did fall for Lacey, Gabriel, and little Bridget.

Lexi: Oh wow. I can’t imagine picking up a half finished manuscript and trying to remember where I was headed with it. You obviously have a very good memory :-) With so many stories running around in your head, how do you choose what to write next?

Annette: Oh, that is difficult. I have at least four new series that I could begin this minute, though I have narrowed it down to one that I’m feeling the itch to write. Readers write to me daily for more witches, dragons, angels, mysteries, rogues . . . you name it.

Lexi: And I don’t blame them! What was the strangest fan comment you have ever received?

Annette:  The strangest was in a fan letter, hand written, where the reader said I taught her that God would forgive anything. That made my hands shake, because I realized then how much power words can have. It’s scary. I write because I want to take my readers away from the difficulties of life, give them joy and hope for new beginnings, so they know better things can come, but that note just threw me.

Annette:  My editor called me while I was at lunch with a bunch of my writer friends, so what do I do? Turn off the ringer and listen to the message alone later. Anyway, my husband heard the scream. At the time, my son was about to get married and I’d decided to be frugal and use my mother of the bride gown as my mother of the groom gown. When I hit the Times, I remembered a friend who celebrated each NYT hit with jewelry. Aha! Someone I love had a GEORGEOUS diamond ring and earrings set with negative memories that she never wore. She was going to lend it to me for my son’s wedding. But money was a struggle for her at the time, so I asked her if I could buy the set to celebrate hitting the Times, and I did. During the reception, she leaned over to touch the ring on my finger and with tears in her eyes, thanked me for erasing the bad memories and attaching such wonderful new memories to the set.  It will always be the NY Times ring that I wore to my son’s wedding.

Lexi: I got goosebumps from that story. That is absolutely wonderful. So what can we expect next from you?

Annette:  A new contemporary romantic comedy series with heart and hope, love and laughter, and a touch of magic.

Lexi: Sounds perfect! It has been awesome to have you visit us at Happily Ever After Thoughts. Thank you so much for chatting.

Annette:  Lexi, this has been fun. You asked some thought provoking questions. Thanks for the challenge. 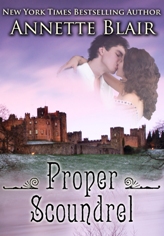 Lexi: My pleasure, Annette. It is so exciting to have you with us!

For a chance to win Annette’s PROPER SCOUNDREL, be sure to leave a comment for her.  Don’t forget to include contact info in your comment in case you win. There will be three winners!

Annette:  Feel free to ask more questions and I’ll try to answer them.

For more information on Annette’s Romances go to         http://www.annetteblair.com/index.html
http://twitter.com/annetteblair
To find out when a new book is available, sign up for Annette’s mailing list at: https://www.facebook.com/annetteblairfans

Lacey Ashton, unnoticed in the midnight shadows, fixed her hungry gaze upon Gabriel Kendrick, the most formidable of the ghosts she had come home to face.
Dwarfing his surroundings, Gabriel bent to keep his head from an intimate encounter with a raw-oak barn beam while protecting the newborn lamb in his keeping, a smile in his eyes, if not on his face . . . until he saw her. Gabriel the indomitable—named for the bright angel when he should have been named for the dark—stood frozen in vulnerability.
A heartbeat, no more, and the scoundrel narrowed his eyes, stepped forward, stretched to his full staggering height, and squared his shoulders to a stunning span. Lucifer, sighting prey, spreading charred wings.
His chiseled features, graven in shadow, sharpened to unforgiving angles as his dark-fire gaze seared her.
Lacey stepped back. In that moment, despite her resolve, she wanted nothing more than to turn tail and run . . . except that she could not seem to move.
Here stood the father of her child, while between them stood the lie she’d told to deny it—saving him and tormenting him in one horrific stroke.
A horse snuffled and shuffled in its stall, freeing the scent of hay musk into the grip of silence, injecting reality into unreality, replacing the past with the present, and allowing her finally to draw breath.
As forbidding as her nemesis appeared in lantern light, dressed entirely in black, the tiny white lamb tucked into his frock coat humanized him, the contrast bringing his cleric’s collar into conspicuous and bright relief.
A vicar’s trappings, a scoundrel’s soul, and no one seemed to know, save her.
He no longer fit the image of the young man she had carried in her heart. His features, familiar despite the firmness of his jaw, had been lined and bronzed by time and parish responsibilities to a mature and patrician air. His leonine mane, still an overlong tumble of sooty waves, thick and lush, bore strokes of gray at the temples. No phantasm here, but the bane of her existence in the flesh, more daunting, more vitally masculine. More a threat to her sanity than ever.
As if he could read her, Gabriel shifted his stance, on guard, watchful, yet before her eyes, a hard-won humility replaced his arrogance.
He did not do humble well, and his attempt jarred her.
He’d always been proud, even when they were children—he, the indigent son of a vicar who squandered parish funds; she, the daughter of a duke. But now, their roles had been reversed, and the duke’s daughter stood, impoverished, disowned, before the boy who’d adored her, then hated her, with all his heart, face to face for the first time in five years. “Gabriel,” she said, wishing her voice did not tremble and her body did not remember.

Annette: I hope you enjoyed this peek at the first half of the first chapter of HOLY SCOUNDREL.

Lexi: Be sure to leave a question or comment for a chance to win one of three copies of PROPER SCOUNDREL.
Posted by Alexis Walker at 7:00 AM