Guest author Patricia W. Fischer: How My Character is Flawed and Fabulous 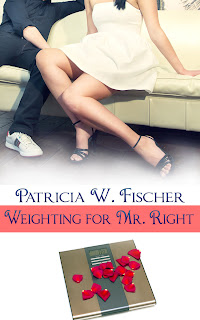 And the winner is…

Yep, I’m a major Oscar junkie and I’m thrilled that I’ve been asked to hang out on the Happily Ever After Thoughts blog today, especially since this week is a special one. Not only is it Oscars Day, it’s National Eating Disorders week. Wait…wait! Hear me out!

Why is that important? With over half of the US population being overweight and a high percentage of those sitting in the obese category, it’s important to simply be aware.

Now before you do the obligatory eye roll and link to something else, bear with me, this does apply to the book I’m pimping.
My romantic comedy, Weighting for Mr. Right, tells the story of Megan Sayla, a woman who simply decides to take control of her life at the last possible minute. During her journey to get her life back, she starts to put herself first and take her health in her hands, but she discovers that the decisions to eat right and exercise aren’t always met with unicorns and rainbows.

I wanted to write a romance that ended up being something new, different and with another perspective. Yes, it’s a lot like a Cinderella story, but I liken it more to Man Of La Mancha, except Megan isn’t a prostitute and the hero isn’t crazy.

Sorry, I digress. With the popularity of shows like Celebrity Fit Club, The Biggest Loser, Extreme Makeover—Weight Loss Edition, it made me wonder what happens when you change your weight? Because it’s not only about being in a smaller size jeans, you’ve got to change everything around you, how you eat, what you eat, how you socialize and those things will change who you hang out with. And I think this change paralyzes so many people.

One point I want to make here, this isn’t a fat girl got skinny and her life got great book. I didn’t want to write that story because I don’t think it applies to the majority of the population. In fact, I don’t have her “get skinny” but healthy and mindful and still wonderfully flawed. There’s even a major scene where I have her distressed over the fact she’s consumed a half roll of cookie dough and derails her momentum.

Like many of us who always worried about those stupid numbers on the scale, we’ve become too preoccupied with numbers instead of health and Megan does start that way. She’s been so focused so long on the scale that she loses sight of what she can do instead of allowing those numbers to tell her she can’t. Megan comes to discover she’s hiding behind the “I can’t because I’m fat” shield for too long and is thrown into a situation far outside her comfort zone and has to sink or swim.

During the course of her journey, Megan has solid people helping her along as well as those who try to derail her success.  Again, she’s like so many people I’ve met over the years and like myself, had to figure out how to come out from behind that shield and appreciate the body and abilities I have.

I’m proud to say in the past year, I’ve dropped forty pounds and feel far better than I did before. I’m still overweight and I’m still working on improving my health, but I’m not obsessed with it and I don’t fret over that scale.

For more information about Megan, an excerpt of the book, and my other writing projects, come by my website or visit me on Facebook, Twitter, or Pintrest.

You can purchase Weighting for Mr. Right at Amazon, AmazonUK, SoulMate Publishing, Barnesand Noble, or Kobo.

Leave a comment for a chance to win Weighting for Mr. Right or a $20 gift to Amazon, Barnes & Noble or iTunes.