Dawn Kunda Review START ME UP by Victoria Dahl 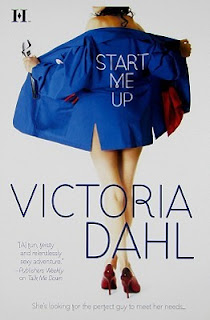 That’s who she decides to find when she rationalizes her life isn’t going any further than the garage she now owns and where she repairs vehicles.

Quinn Jennings would be the perfect match, if he agrees to just sex.  Just sex and nothing more. No feelings.  No foreplay.  Just hot sex.

Always working and thinking about his architectural plans, Quinn could find a little time to take care of Lori’s inhibitions.  He might be able to squeeze her in.  As long as she doesn’t mind that he’s perpetually late and forgets dates and times if his secretary doesn’t keep him on track.

Lori wants new experiences.  Quinn’s a man.  He wants to give them to her, so he does a little offline research.  Her pile of romance novels makes his body hard when he reads what she’s looking for.  Two can play this game.

Then the case of her father’s death is reopened.  His death might not have been an accident and suspects include Quinn’s clients.

Lori’s suspicious and always on guard and Quinn doesn’t have a clue to what her problem is.

A little communication would be advantageous if they are willing to admit that the arms tied to the bed, the public alley, and those late night thoughts of one another could lead to more than Lori’s original proposal.

Dahl’s light and dangerous affair can make you laugh-sometimes at yourself-when she lets her readers experience a dash of humor and respect for the feisty Lori who lives the naughty thoughts we might just put away for later…until we get the nerve to act them out, or at least read about them.