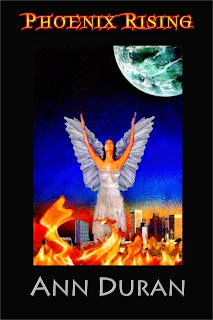 It gives me great pleasure to have Ann Duran with me today. Ann has released two novels, Phoenix Rising and Raven’s Nest, which are as different as any two novels can be. Thank you for stopping by Happily Ever After Thoughts. It’s wonderful to have you here.

Marie: I have to know, Ann, when did you know you wanted to be a writer?
Ann:  As a child of the 50’s and 60’s, my burning ambition was to be a reporter ala Brenda Starr.  My life, however, zagged when it should have zigged and I never followed that career path. Instead, I married and had children. Now, fast forward to the late 1990’s.  I was a huge fan of The X-files and enjoyed reading the fan fiction of the show.  Some of it was excellent and some of it not so much. However, it ignited in me a flame of desire to tell my own stories.  I hesitated due to a lack of confidence, but after 9/11 my youngest daughter said to me, “if not now, Mom, when?”  Thus an author was born.

Marie: Tell us a little bit about Phoenix Rising and Raven’s Nest.
Ann: Rising is my first book. It’s a product of the old saying “write what you know.” The setting is a fictionalized Mafia-owned brokerage firm in .  Many things in the story are drawn from life. Not the murder/arson/mayhem (thankfully) but my life as a stock broker presented me with a rich banquet of experiences to draw upon.  It’s the story of Jack Herrell, an undercover agent for the Arizona Attorney General’s office,  who wants to find his wife's killer and make him pay, because even though ten years have passed, he's determined to solve the murder. Little does Jack know he isn't merely waging battle with a murderer; he's in the middle of a bigger battle, one between Satan and Michael the . For his soul.  Angels and demons take an active part in the lives of the characters.  Available at Amazon  as well as B&N 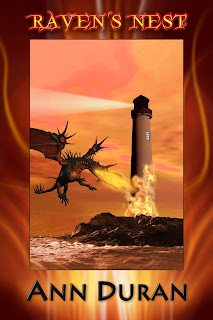 Raven’s Nest is a time travel/fantasy adventure with romantic elements. Eric Morgan, a time traveler and shape shifter living nearly 300 years in the future finds out how complicated love can be when he travels to 1718 to rescue Celeste Beckett from the clutches of ruthless Blackheart the Pirate. When Eric receives a call from Celeste's father, Nathaniel Beckett, also a time traveler, begging him to save his beloved daughter, Eric can't resist another journey to the past. Little does he know his trip will not only bring him face to face with his old nemesis, but also a new, more dangerous one. Eric's actions cause a cascade of events that will tear apart one family and force another to test the bonds of forgiveness and love.  Available at Amazon and B & N

Marie: What were your inspirations to write such different stories?
Ann:  I’m a free spirit when it comes to writing, drawn to paranormal, fantasy, time travel and romance. Thus, when a reader chooses an Ann Duran book, the subject matter will vary. The tagline for my website is “take a journey to the unexpected” and that’s what I hope my fans feel they receive.

Marie: I’ve been in on Raven’s Nest since the beginning. What made you choose a time travel/shape-shifting fantasy?
Ann: I was on a summer vacation to a few years ago with my Significant Other. We drove to from and sitting back from the road in a belt of trees, I saw the most glorious three story Queen Anne style house that reminded me of a fairy tale castle with turrets and verandahs.  I’d had a dream several weeks prior to that about a “creatures” in a house that assumed different forms such as furniture.  I combined the kernel of inspiration from the dream with the house and started asking “what if…?”

Marie: You’re an avid reader so which authors inspire you?
Ann:  My love of reading was inspired by authors such as Alexandre Dumas, Mark Twain, Louisa May Alcott, and Jane Austen. I could lose myself by the hour in their books.   I was drawn by their lyrical use of language and vivid characters. I was fascinated by Dumas’s exploration of revenge in the Count of Monte Cristo, while Mark Twain’s humor drew me like a magnet to his writing.

Marie: Everyone has their own writing process…how they come up with ideas, how they name their characters, how they choose the setting. Can you describe your writing process?
Ann: Sometimes my ideas are the result of vivid dreams, other times they are the result of wondering “what if…?”  Phoenix Rising and Raven’s Nest both embodied a “seat of the pants” process that involved sitting at the computer and letting my characters surprise me with where they wanted to take the story. This necessitated quite a bit of reworking for continuity, pacing etc.  I found it quite time consuming.  I’ve decided with my next book, Waking the Dead, to do a substantial amount of plotting and outlining to see if that’s any faster for me. So far…not so much. I think I’m just a slow writer by nature and need to make my peace with that fact.
As to naming my characters, once I’ve decided the time frame, setting, and genre I try to pick names that express a facet of the story. In Waking the Dead, for instance, my heroine’s name is Anastasia, which means “resurrection”. Most appropriate for the storyline. Supporting characters get names to reflect certain character traits or flaws and are period appropriate.
I typically write at night and on weekends since I still have my day job as a stock broker.  One thing I do like to do is occasionally write in long hand on good old fashioned paper. That truly does release creativity, at least for me.  It also imparts a greater appreciation for the classical authors mentioned above who had no access to a “delete” key.

Marie: Fill us in, Ann, as with other writers, you’re constantly working on new ideas so what are you working on now?
Ann:  I’m working on a story involving the ghost of a Union officer in the Civil War, Stephen Austin,  who is fated to relive a fateful battle nightly on the property of a local school teacher in .  There is only one way for the ghost to end his horrifying reenactment and free his spirit to heaven and that is to save a life.  How can a ghost save someone’s life? We shall find out.  There are several twists and turns to the story that I believe will make it quite compelling.

Marie:  I thoroughly enjoyed both Phoenix Rising and Raven’s Nest and I’m so glad you could be here with us, Ann. I’m looking forward to seeing what you come up with next.
Ann:  It was a pleasure to be here with you today.  Thank you for inviting me.
For a chance to win a copy of Raven’s Nest, be sure to leave a comment for her.  And don’t forget to include contact info in your comment in case you win.
For more information on Ann’s stories, go to www.annduran.com, follow Ann on Twitter: https://twitter.com/Ann_Duran11 and Facebook: https://www.facebook.com/Ann.Duran11


Marie: For a chance to win a copy of Raven's Nest, be sure to leave a comment for Ann.  And don’t forget to include contact info in your comment in case you win. Winner will be announced and contacted on Wednesday. Now, c
heck out this excerpt from Raven’s Nest:

“Damn you, harlot’s spawn!” Blackheart the Pirate spat the words through a haze of blood and pain. A sharp kick to his groin caused him to bite his lip, drawing blood that trickled into his beard. Taking Celeste Beckett hostage was more trouble than he had bargained for. Not one of those shy, spiritless maidens populating polite drawing rooms, she forcibly reminded him of her mother, Moriah, whose charms he remembered well. The finely sculpted dark eyebrows above those startling blue eyes, the sneering mouth, the rounded breasts and curvaceous hips, and, finally, those golden curls, brought memories to the fore of more pleasant times and activities.
As badly as he itched to teach her a lesson, he hadn’t the time for such luxuries. He launched himself upon her body and clapped his fingers over her mouth, careful to avoid a repeat encounter with her eager-to-kick legs. He held his finely honed dagger to her slender white throat and pushed aside the ruby pendant hanging like a bloody teardrop.
“You are in my power now, Celeste. Make a single cry or utter one whisper of a sound and you will die on the spot. Have I made myself clear?”  The furious drumbeat of her heart throbbed against his arm. She nodded and he noted with satisfaction a sheen of moisture cloud her magnificent eyes. “Moriah and Nathaniel will pay dearly for their betrayal. You, my dear, are the coin I will use to satisfy their debt.”  With that, he bound and gagged Celeste, hoisted her over his massive shoulders, and climbed out of the window whistling a jaunty tune.