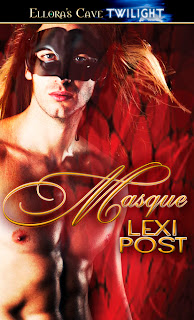 It gives me great pleasure to have Lexi Post, Happily Ever After Thoughts’ newest contributor, with me today. Lexi’s debut novel, MASQUE, came out March 8 so I thought I’d take a few minutes and ask her what’s been on my mind.

Marie: I have to know, Lexi, when did you know you wanted to be a writer?
Lexi: I came late to the game of writing, mainly because I didn’t like to write, but I was always making up stories.  I used to make up a bedtime story every night for my much younger siblings.  Once I discovered romance novels, it was natural that I would eventually want to make up my own story, of course, that meant I had to learn how to write well. That took awhile :-}

Marie: I’ve been in on this story since it was first a twinkling of an idea but I’ve never known, what made you choose “The Masque of the Red Death”?
Lexi: Actually, I was planning to base a story on Poe’s “The Fall of the House of Usher,” but I hadn’t found the time to re-read it when one of my students did a paper on “The Masque of the Red Death.” Since it had been years since I’d read it, I had to read it again before grading the paper.  When I read Poe describing the seven colored rooms my mind suddenly threw me toward the erotic and I knew each room would have to be a separate sexual experience. The only problem was that everyone dies in Poe’s story, so how could I link it to today, and then it hit me. What if the masquerader in the  mask of the Red Death wasn’t Death, but a friend trying to do the right thing, only to have it all go wrong. And so Synn came into existence :-)

Marie: Everyone has their own writing process…how they come up with ideas, how they name their characters, how they choose the setting. Can you describe your writing process?
Lexi: I call my process “The Dump.” Basically, I get an idea from a classic story which dictates a lot, and then the idea has to percolate in my head for awhile. When I have my goal, motivation, conflict, and the dreaded black moment figured out, I start writing.  This is “the dump.” I literally dump the story into the computer. When I start, I don’t know everything that will happen and I’m continually surprised, but after about 8 weeks of frantic writing, I have a rough draft. Those are 8 weeks of sheer joy! Then I have to let the story sit before I go back and revise. Yikes, what a mess that draft is.  It takes me eons just to spell check the whole thing! It goes to my critique partner, the lovely and talented Marie Patrick.  I think you know her, and then I revise some more and polish it up.

Marie: Fill us in. MASQUE is your debut novel, but I know, as with other writers, you’re constantly working on new ideas so what are you working on now?
Lexi:  I have a WIP that’s just about ready to send to my editor. I just need to do the final formatting.  It’s called To Bea Rappaccini and it’s inspired by Nathaniel Hawthorne’s “Rappaccini’s Daughter,” only my Bea Rappaccini must have sex to expel the poisons her body produces. Either that or die. Unfortunately, her poisons also make men extremely ill and she has unintentionally sent one into a coma! So when she falls for Zach, things get interesting :-)

Marie:  I thoroughly enjoyed MASQUE (I giggled my way through it) and I’m so glad you could be here with us, Lexi. I’m looking forward to seeing what you come up with next. 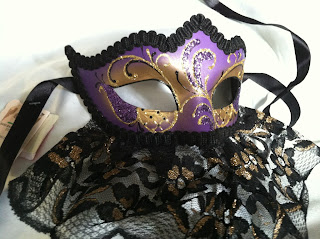 Marie: For a chance to win the beautiful purple and black lace Venetian mask pictured here be sure to leave a comment for Lexi.  And don’t forget to include contact info in your comment in case you win. Winner will be announced and contacted on Wednesday.

Marie: Check out this excerpt from MASQUE

Synn MacAllistair grasped the embrasure of the parapet, his heart thudding as he stared at the vehicle crossing the stone bridge over the moat. It came to a stop at Ashton Abbey’s massive gate.

He waited. The great iron grille, chained and padlocked against intruders, would be considered a significant deterrent to entering. Open it. Damn it, open it!

The vehicle remained stationary. No one exited the large red monstrosity.

Impatiently, he pushed away his hair as the breeze whipped it across his view. What were they waiting for? If they needed an axe to break the chain, he’d gladly provide them with one.

Another smaller vehicle rolling parallel to the west wall caught his attention. It crossed the bridge and parked behind the larger one. More people?

A man stepped from the small conveyance and shuffled to the gate. Synn leaned farther over the battlement, anxious to see if their time had come. The joyful sound of clanking chains floated up to him on the breeze.

Finally! About bloody time. He swallowed hard to keep the yell of triumph from escaping his throat. No need to scare their new guests.

The man below hurried back to his transport and, without hesitation, backed across the bridge and left faster than he’d arrived.

Synn peered down at the red vehicle, still as a brick, its black windows making it impossible to see inside. A door opened and a woman burst onto the cobblestone entrance. She bent over and spoke to someone else still inside. Her blonde hair hid her face, but her ass, covered in men’s trousers, was small, her legs lanky. A woman? A woman dared enter a haunted abbey? He tried to grasp the concept.

His plan was to convince a man to enjoy the pleasures of the flesh, but there had to be a man to convince…unless a couple entered the Abbey. Couples enjoyed the Pleasure Rooms as well. If he could persuade a couple to participate in the Masque then his companions could still be freed.

Peering hard, he watched and waited. After what seemed another decade, a door on the other side of the red contraption opened. He held his breath, willing the occupant to have broad shoulders, a beard, anything to indicate a man.

A long, slender leg stretched out, a black high-heel shoe of delicate design at its end, and a feminine hand grasped the side, but remained stationary.

He growled with frustration. “Bloody hell. What am I supposed to do with two women?” He hadn’t expected women. The Abbey overflowed with spirits. Only men should dare enter. How were blasted women going to help him? He paced away from the wall, but quickly returned. Could there be more people inside the vehicle?

He waited, his patience long gone, not that he ever had much, but damn, it’d been a hundred and fifty years. That would strain the patience of an archangel, something he definitely was not.

He glared as the leg moved and within a moment’s breath, the woman unfolded herself from the conveyance.

Synn stared, frozen in time for once, drinking in a beauty far surpassing any painted Aphrodite he’d ever gazed upon. Her long, wavy brown hair captured the sun, shining like fine brandy. Her figure, as lush as any Greek goddess, swayed sensuously in her short dress. Her arms were bare and the smallest of noses held her dark glasses in place. He stepped back, away from the crenellation, his heart racing, his mind whirling with ideas.

He paced the length of the wall. A vision was about to enter his stone prison. A woman fit to be worshiped with every salacious touch he’d ever learned. His cock hardened beneath his pantaloons. Amazed, he stopped and looked down at it. After so many years of having no needs—for food, for sleep, for relieving himself—the last he’d expected to feel was the need for a woman. He shook his head. It defied logic. But if his body could respond, then he could participate, guide a woman through the Masque.

The creaking hinges of the gate brought him back to the wall to see the backs of the two women entering the Abbey courtyard. Two women. Vivid memories of his happier days with the prince caught him by surprise and gave him hope. As he strode across the wall-walk and down the stone staircase, his mind raced with possibilities. One after another they were discarded as he floated to the landing on the second floor. But a new plan began to form as the great pine doors opened.

Marie: Don’t forget to leave a comment for a chance to win the Venetian mask.
Posted by Alexis Walker at 7:00 AM