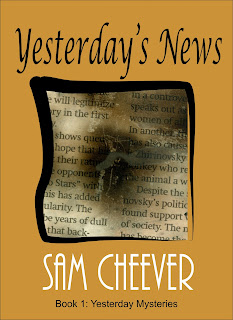 We are pleased to have the witty Sam Cheever with us today. She is talking about characters who are Too Stupid To Live and giving away a copy of her latest release, YESTERDAY'S NEWS to one lucky commenter. So don't forget to comment. Enjoy!

What makes a character too stupid to live? I’m sure everybody has a unique list of traits that make them root for the bad buy to succeed in taking out the hero/heroine. Since I write adventurous paranormal and romantic suspense/mystery, I tend to couch my TSTL descriptions in thriller/horror movie terms. Here are the traits that might make me pick up a chainsaw and join the killer in the hunt:

1.      A total disregard for the intelligence of walking into that dark, spooky house alone and unarmed…or out of the house into the shadow-drenched yard where a guy holding a chainsaw and wearing a hockey goalie’s mask awaits. Yeah, nice guys always lurk around holding chainsaws and wearing masks. Yeesh!

2.      The proclivity to do the same things over and over and yet be surprised by the result. Let’s see, I’ll just go down these basement stairs and see what’s making that thumping noise. Yikes! A horrifying killer…ack…he sliced off my arm! Retreat…Oh, I wonder what’s making that scraping noise in the attic? I’ll just climb the attic stairs and… Argh! A terrifying slasher…ugh…he sliced off my leg! Retreat… Is it really too much to ask for the hero to figure out it’s not a great idea to pursue the cause of the latest scary noise before he looks like the Black Knight in Monty Python’s Holy Grail. ‘Tis but a scratch.

3.      The oh-so-obvious ploy for attention—such as wearing a sleeveless black dress with half her boobs hanging out to go ice skating. Mm hmm. Or four-inch, spiked heels in a chase scene. Really? Actually I blame producers for this. Please stop insulting my intelligence!

4.      Then there’s the whiny, emotionally weak character. All that angst and whining puts my teeth on edge. Give me Vampire Pam in True Blood any day. At least she does something about what hacks her off, rather than just sitting around her apartment, whining about how horrible her life is, and eating Ben and Jerry’s in her bathrobe. Ugh!

5.      The judgmental yet hypocritical character. I’m all for expecting the people we care about to be the best they can be, but let’s not expect perfection. I can’t stand the character who is continually judging her love interest for real or perceived flaws while amping up her own flaw tally with abandon. “I can’t believe you forgot to put the cap back on the toothpaste…it’s over between us.” “But honey, you slept with the grocery delivery guy yesterday.” “Don’t deflect, we’re talking about you right now.”

6.      The clueless lover. Have you ever read a book with this character? Everybody in the story knows that the guy who lives down the street adores her. Everybody but her. Somehow she misses the constant, love-sick vibes he sends her way…or the way he’s always there almost before she needs him and will do anything for her—anything—including losing his job/health/mind to keep her safe. Don’t you just want to smack this clueless wonder upside the head? Gack!

I could probably go on and on and on…but you get the idea. Characters like these are enough to turn me off a book/movie and the author who created them for a long, long time. What characteristic(s) make a character TSTL for you? Let me know in a comment and I’ll add you to a drawing for a download of my fun cozy mystery, Yesterday’s News. Make sure you include your email!

Book Blurb:
Antiques can be a dangerous business. Especially when you’re dealing with a desperate politician, a sexy ex-cop, and a couple of “spirited” companions.

Anna Yesterday owns Yesterday’s Antiques in small town USA. When she finds an old newspaper clipping lining the drawer of an antique dresser, she realizes she’s never heard the ugly story of rape and suicide detailed on the yellowed newsprint. So she starts to dig, and her sleuthing exposes an ugly cover-up that casts the residents of Crocker, Indiana into danger and intrigue, and leaves them with a corpse.

"With a sexy ex-cop (who doesn’t love a romantic element), ghosts and a mystery that kept me riveted how could I resist? If you like paranormal elements and romance with your cozy mysteries
then I recommend this one."
~ Cozy Mystery Book Reviews

For more information on Sam Cheever visit: http://www.samcheever.com/
Posted by Alexis Walker at 7:00 AM