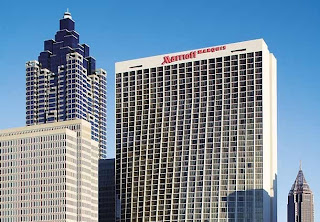 For many people, summer is a time for vacations, but for romance writers, it is often a time to go to conferences and reader conventions. My first trip this summer will be to the Romance Writers of America National Conference in Atlanta. I have gone to a few RWA National conferences in the past, but this will be my first time attending as a published author and I’m beyond excited!

At first, I didn’t think morphing from writer to author would mean much of a difference at the National Conference, but I was clued into the change when the editor and agent appointments were announced as open. Last time, I remember panicking because the electricity was out at my house and I had to drive to a coffee shop to sign up for my appointments. This year when the announcement was made, I was shocked to realize that I didn’t have to do anything. I have a great agent and a wonderful editor, so this year I won’t be hanging out in the appointment waiting area, unless I’m there to support a friend :-)

The next reality hit me when I received an invitation to a cocktail party being thrown by my literary agent. Huh? Really? You want me to come? OMG. I couldn’t believe it! I think I responded positively within two minutes. No, I definitely didn’t play that one cool at all. I was just so excited to be invited. But it didn’t stop there. Nope, my lovely editor then asked me if I would be attending a certain party because she wanted us to meet there and check our schedules for the next few days so we could get together. As it turned out, I was attending that party (for erotic authors) and I looked forward to catching up with her there. Yes, I was a bit more professional with that one, but barely :-}

But in addition to all of that, What I look forward to the most about going this year is that I will have the chance to catch up with all my writing friends, and I’m not leaving that to chance at all. I haven’t seen some of them in four years while with others it’s only been two. I’m actually setting up times to meet. I have to. With over 2,000 people attending, I could go the whole four days without ever seeing someone if I didn’t set up a meet time and place before even getting on the plane to go.

Of course, there are also all the workshops, the book signings, the awards ceremonies, and the impromptu gatherings in the bar or coffee shop. I know I am going to be exhausted when I get back, but I don’t care. To be around that many writers is like being high on life. I know I won’t come down to earth for at least a month.

Now the tough part, deciding what to wear :-}

Always,
Lexi
Posted by Alexis Walker at 7:00 AM