Winter in July with Giveaways 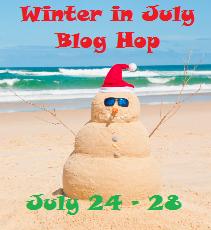 Today is our final stop on our Winter in July Blog Hop! We want to thank Happily Ever After Thoughts and all our other sponsors for hosting us and allowing us to share our winter stories with you. Thank YOU as well for following along with us and for all the comments you’ve left!
For our final day, we decided to share a small snippet of each of our stories. We hope you like them as much as we loved writing them! We’ve also added a buy link just in case you’re so intrigued you just HAVE to have one of the books now!

Finally, thankfully, after an eternity, Jordan had her coffee. She turned from the counter and sighed heavily, seeing nothing but a rolling sea of people and nary an empty seat in the place.
“The fun never ends,” she grumbled as she tread through the tables, trying not to hear the screaming children, the frustrated grunts, the whining complaints, the sappy Christmas Muzak.
And then she saw it. Off in a far corner, an empty seat. Jordan could almost hear the heavenly choir sing as she traversed the distance, entirely focused on that plastic vision of sublime relief.
The chair appeared to belong to a table where a man sat with his head bowed over a steaming cup of coffee. He wore the lower half of a Santa costume and a white t-shirt. His hat, beard and jacket rested off to the side. A bright red shopping bag sat at his feet. She wondered for an instant if he was the Macy’s Santa, but quickly realized there was no way they’d let him sit half-dressed in the cafe if he were.
“Excuse me?” she asked, hovering over him. “Is that seat taken?”
His head came up at the sound of her voice, and Jordan involuntarily gasped. He was gorgeous! Like unbelievably, seen-only-in-magazines gorgeous. Messy dark-brown hair framed his handsome face, and a spark of good-natured humor shone from the depths of his ice-blue eyes. The barest shadow of a beard highlighted the sharp angle of his jaw and outlined his very luscious lips. The t-shirt hugged his arms and fit snugly against the hard contours of his chest. She knew that Santa Claus should not be inspiring the wicked, wicked thoughts that instantly popped into her head, and yet she couldn’t help but gaze at his full lower lip and wonder what his kiss might taste like.
Buy: http://www.ellorascave.com/santa-s-sleeping-beauty.html

Catherine Peace’s This Time Next Year
A rustling to her left alarmed her. The door to the bedroom opened, revealing the most beautiful man she’d ever seen. A pang of remembrance speared her heart, but she didn’t know him. Maybe a foot taller than she, he had a slender build, broad shoulders, lean legs, strong arms. He possessed an old Hollywood appeal, like someone had ripped him from the 1920s and crow-barred him into a dark pair of jeans and fitted black T-shirt. He wore his dark hair slicked back from his sculpted square-shaped face; stubble lined a strong jaw that could probably cut diamonds. But his eyes, deep-set and lined with dark lashes, demanded her attention. Despite the dimness of the room, they almost…glowed.
She licked her lips. Heat spread through her and pooled uncomfortably between her thighs. Christ, how long had it been since she’d even been aroused?
He stepped into the full light of the candles, the shadows dancing across his face, providing a kiss of warmth to his fair skin.
No, not fair. Pale.
Deathly pale.
Buy: http://www.decadentpublishing.com/product_info.php?products_id=809&osCsid=9a0p1drddlv7maol028p08fmq5

The announcer spoke on, but the words jumbled together in Joanna’s ears. Her heartbeat thumped against her ribs. The teacup rattled on its saucer.
Staring at her from the television screen was a picture of the victim on the train.
“Colin!” Joanna’s heart pounded faster. She set the saucer on the bedside table and scrambled to the foot of the bed, as if sitting closer to the television would give her more insight. Listening to the announcer list details and stats of the missing man, she prayed she remembered them correctly.
When the water turned off in the bathroom, she hurried to the door, and knocked. “Hey, we’ve got something!”
No response.
Too keyed up to sit, she paced across the room. Finally, she’d be able to do something for the missing man. She had more proof she wasn’t crazy. Soon, she could enjoy the holiday as she’d planned.
The bathroom door flew open. “What is it?”
When she pivoted by the round table, she jolted to a stop. Her jaw dropped. Colin stood in the hallway with only a white towel wrapped around his trim waist.
She’d expected him to be fit since he was a professional bodyguard, but all the visions in her head could not compare to the real sight. Not quite a six-pack of abs, but damn close. A thin layer of hair coated his chest, with the majority of it under his belly button and leading to—
“Joanna.”
She blinked her way back to the present. “On TV. It’s the victim from the train. He’s missing.” As she scrambled across the mattress to grab the remote, he walked toward the foot of the bed. She focused on switching the channel to another news show.
He propped his hands on his hips—which loosened the towel.
Buy: http://www.decadentpublishing.com/product_info.php?cPath=75_197&products_id=695&osCsid=se41g1cemjd0e3nqmppq91dfj0

Taryn Kincaid’s Frost
“I’m Maxwell Raines.”
Yeah. No kidding. Who else could a guy so hot, so studly, possibly be?
She told herself not to swoon. Ordered herself not to swoon. But, Goddess, that rumbling voice. More potent than a train barreling over the tracks. And he smelled so good. Sinfully masculine. A bit of musk, a bite of pine, an essence of dark, smoky nights. Sexy scents. Reminiscent of tangled satin sheets that had been given a good work-out.
Her legs turned to rubber, and she doubted they’d support her on their own. She’d be mortified if he’d have to scrape her puddled body up again. But he hadn’t yet relaxed his grip. Could she bullshit her way through the meeting without collapsing? “You’re late,” she said.
“I’m never late.”
Buy: Amazon

Eva Lefoy’s Steal My Heart
The figure reclined in the tub was a woman. A naked woman. His balls contracted automatically. His gaze took in her long blonde hair, the wine bottle, and the pile of black clothes. He couldn’t see her feet, but he’d bet money those skis were her size. She appeared to have fallen asleep. He ventured onto the patio and cleared his throat. “Excuse me.”
She thrashed awake, sending water over the tub’s lip. “Wha-what?” She caught sight of him and blanched. “Who are you?”
He shrugged a shoulder. “Just the owner. I live here.”
Her jaw fell open. “You do?” She seemed to look him over anew. “I mean, you do? Wow.” She shook her head. “That doesn’t make sense.”
He walked a few steps forward and grabbed the wine bottle off the deck. “It helps if you read the name on the mailbox.”
Her eyes flashed fear and she jumped out. “Don’t come any closer. I’m armed. I’ll … I’ll…”
He watched her glance desperately around looking for a weapon. “Hit me with a ski pole?” He smiled and pointed at the scar on his head she probably couldn’t see. “Already happened. And besides, you left them in the mudroom.” He took a look at the bottle in his hand. Woods Riesling 2008. A tasty vintage. She had good taste as well as good sense. Except for the breaking and entering. Because she was now standing on the edge of his hot tub completely naked, steam rising off her moist skin, trying to cover her breasts with her arms and crossing her legs in an attempt to conceal her pussy. His cock went harder than a frozen steak…
Buy: http://amzn.to/13DnHlC

Emily Cale’s Two is Twice as Nice
"Why are you sitting so far away from me?" He patted the space on the couch between them. "I know you have a wonderfully large couch, but I was kind of hoping you would at least sit close enough for me to put my arm around you."
The lump in her throat kept her from speaking; instead, she slid down the couch to his open arm. As soon as she was near him, he pulled her toward him. The heat from his body engulfed her, running through her veins until every inch of her skin tingled.
Between his fingers dancing over her knee and the sensation of his hip pressing against hers, it took every bit of effort she could muster to pretend to be watching the movie, let alone actually know what was going on. Leaning forward, she placed her mug down on the coffee table. The alcohol in it had sufficiently warmed her insides, and she was afraid if she kept drinking, her judgment might be compromised. Of course, one look at his dimples and her sanity would leave her, and a little impaired reaction would lead to a morning of regret.
Buy: Amazon

All right! So, are you interested in finding out more about any of these hot, hot books? Or all of them? Leave us a comment (with your email address) and you’ll be in the running for one of our awesome SIX prizes! We will be choosing 1 winner from each day of the blog hop and the person who comments the most during the blog hop will also win a prize! AND….if you want to see what else we’re up to or to leave comments on other days, here’s the list of our locations for this blog hop:
July 24th- Sara Brookes' blog- : http://www.sarabrookes.net
July 25th- The Literary Lagniappe- http://literarylagniappe.com
July 26th- Get Lost in a Story Blog- http://getlostinastory.blogspot.com
July 27th- Pink Fluffy Hearts Blog- http://pinkfluffyhearts.blogspot.com
July 28th- Happily Ever After Thoughts blog- http://www.happilyeverafterthoughts.com
Winners will be announced in the comment section after midnight EST on Sunday 7/28.