Hell’s Highway—Let Me Stab Myself In The Forehead With A Fork!

Hey, guys, here we are again.  Good to see ya…it’s been a bit stressful and lonely out here on Hell’s Highway.  So, let me update you on what’s happened since last we talked.


Remember when you were a kid at the County Fair, running from ride to ride with a string of tickets in your hand?  Every time you got on a ride, your heart soared as your hair blew back, your lips flapped in the wind, and you screamed your tonsils out.  Then the ride ended, and it was always too soon.  Remember complaining to your friends that you got gypped on the price of the ticket because your ride should have lasted twice as long?  Yeah, me too.  And I suspect this Hell’s Highway ride is my penance for complaining back then.  The powers that be have taken it in their hands to make sure I get my money’s worth out of this ride…and then some.  In fact, this is like a merry-go-round in hell. The damn thing won’t stop or even slow down long enough to let me jump.  So I sit here, knuckles white as I grip the rails and watch the world speed by like a jet breaking the sound barrier.  My heart is pounding while I wait for the ride to come to a stop.  But unlike when we were kids, this ride never seems to end.  So the pounding in my heart (and head) escalates until I think my head will explode.  I’d stab myself in the forehead with a fork to make it stop hurting but the ride is moving so darn fast, I can’t get good aim.  My luck, I’d only manage to put out an eye.  Then where would I be?  Stuck on the Hell’s Highway with one good eye and a fork in the other.  Really!
This is installment #2 on my journey down Hell’s Highway. 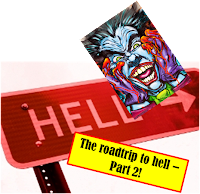 A couple of weeks ago I told you about the rewrites and the edits, about the cover builds and the rebuilds.  Well, now you’ll get to hear about the re-do’s of the rewrites and edits and the rebuilds of the cover rebuilds.  For those of you who have ever indie-published, none of this will be a surprise.  However, those of you who are not writers will think I’m making this up or exaggerating.  I swear, this is the whole truth and nothing but the truth!  I have become convinced that the publishing industry was birthed somewhere along Hell’s Highway and the midwife on that particular night must have been The Joker.


In the last tale, I left off where my cover designer Carol (http://www.bellamediamanagement.com/) was sobering up and airing out her living room after my changes forced her to drink herself into a stupor and set my picture on fire in her living room, while awaiting the results of her nomination for sainthood.  Well, if you know Carol, please send her your condolences because I’m still her client and still changing my stinking mind.  LOL  In my defense, there was no choice.  (My story…I’m tellin’ it my way.)


What happened was that Carol uploaded the gorgeous cover she’d created for me to CreateSpace, I uploaded my 27th and final version of my manuscript, and I hit the button on PROOF.  What that does is it starts the internal review at Create Space where they look at your book, make sure it meets their standards, and they print a PROOF copy and mail it to you.  In my case, I’d screwed around with this project long enough with all my rewrites, edits, and cover changes that I opted to pay the increased shipping fee to get it to me faster.  Remember, my goal is to have print books in hand by August 7th so I can take them with me to the RNC Convention in Las Vegas (http://romancenovelconvention.com/).


I am freaking running out of time!!!


So the big day comes and the box finally arrives.  I’ve been sick with a throat infection, so I get up off my deathbed and open the box.  It’s gorgeous!  It’s spectacular!  It’s the best book ever!  It’s not quite right.  HUH?  Houston, we have a problem.  Problem?  I don’t have time for problems.  It has to be perfect.  Nope, it’s not.  I get to looking at it and I realize part of the front cover is blurry…really blurry.  Not just I can live with it blurry, but we gotta redo it blurry. 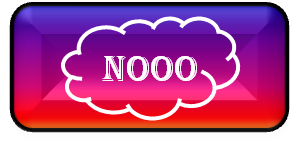 
I text Carol in a panic, trying to figure out how the hell Create Space screwed that up.  Well, as I’m sure you’ve already surmised, Create Space had done nothing wrong—and neither had we.  Remember that search I told you about in Part 1 of the saga…the one where you search for hours to find the perfect picture and you get your heart set on it, only to find it’s out of your price range?  Yeah, that $200 picture…that’s the one.  So what we did was choose a much cheaper version of the picture with fewer pixels.  We put it all together and it truly was gorgeous.  Looked great at this end.  Even when we blew it up to 100%, it was only VERY slightly blurry but should have worked for this part of the cover because we wanted it to look like it was off in the distance.  No big deal…we’re golden.


But what we learned is that when it goes to print at Create Space, any weakness that might have existed (even one you cannot see) will look like it’s been put under a magnifying glass and had big red circles drawn around it when it comes out the other end.  In our case, instead of the print matching the electronic version and looking slightly blurred and distant (which we wanted), the end result was that every image in the picture had a faint white line around it about 1/16th of an inch away from the image itself.  It was like ghost images, and the edges of the images were pixelated.  Well, ya live and ya learn.  What we learned is that the print process is much less forgiving than electronic viewing. 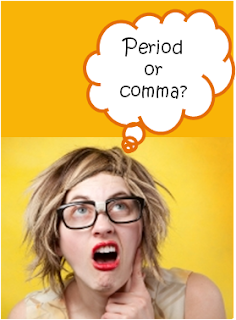 So now we are back to the drawing board.  We have spent hours more searching and finally came up with another picture that will work, and Carol (a.k.a., the saint) has lovingly reproduced for me the most gorgeous cover that I think I love even more than the first.  We’ve also fixed a couple other issues…like my typo in the back cover blurb where I ended a sentence with a comma instead of a period.  Holy cow, who knew that was there until the proof book arrived?


Now, while Carol was reworking the cover, I began my review on the PROOF to make sure everything inside the book looked good.  The first thing I noticed was a spelling error.  Yikes!    That was then followed by a spot where my heroine calls my hero by his brother’s name.  Double yikes!  That’s a big faux pas in any relationship, so it’s a careful slog through the electronic master looking for any repeats…of course, there was another one.  How did that slip through on editing?  I’ll have to have a talk with my editor (me) on that one!!!  I’d rewritten an entire chapter where the heroine is stuck in the wilderness with the hero and decided to have her stuck with the hero’s brother instead.  Now, that’s enough of a relationship test in itself…don’t make the mistake of not cleaning up your mess properly and have her calling him by his brother’s name!  No self-respecting hero would put up with that and could very easily turn my romance story into a murder mystery.  What was I thinking?


So now I am continuing the slow, methodical slog through a manuscript I’d hoped never to have to look at ever again because the first 437 times were enough for me, but apparently not enough for the editing process.  But it’s a necessary evil and you published writers out there who all tried to warn me…remember, that fog of expectation had plugged up my ears.  I couldn’t freaking HEAR YOU!  But I hear you now.  Oh yeah, loud and clear.  And while I still dream of a Kayce Lassiter manuscript on every coffee table or hearth in America, that whole pig farming in Montana in the dead of winter thing is starting to have some appeal too.


Well, folks, this ride ain’t over yet.  I still have to get this manuscript re-edited, re-uploaded and re-proofed in time to get twenty copies printed and delivered to take with me to the convention in less than two weeks.  Where’s that fork? Maybe I can trade it in for a wand because I’m gonna need something to make the impossible happen here!  Stay tuned and I’ll give you an update on whether I make it to the conference with or without books.  If not, you will find me at the bar drinking heavily and flirting like mad with cover models.  Hell, who am I kidding?  You’ll find me doing that with or without the darn books! 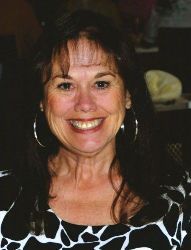 
Kayce
Posted by Kayce Lassiter at 2:30 AM