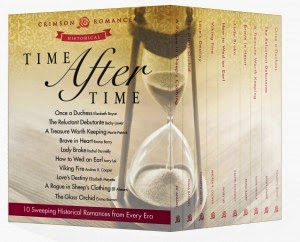 Oh my gosh! My publisher, Crimson Romance, has invited me to participate in a bundled package of historical romance novels called Time after Time with nine other wonderful Crimson Romance authors. I can’t tell you how thrilled I am! How honored! How delighted! I’ll be posting in two parts (stayed tuned for more). So, without further ado, let me introduce you to the other authors and the stories which are part of this set. In alphabetical order by author……

A Rogue In Sheep’s Clothing by Elf Ahern

In Lord Hugh Davenport’s opinion, women of the ton perpetually hide behind a mask of deception. That’s hard for Ellie Albright, the daughter of an earl, to swallow—especially since she’s disguised herself as a stable hand to get back the prized stallion her father sold to Hugh to pay a debt. If Hugh learns her true identity she’ll lose the horse and her family will go bankrupt. Somehow, though, losing Hugh’s affection is beginning to seem even worse.


Already only a step away from being snagged in her own web of lies, Ellie’s deceit threatens to spin out of control when Hugh’s mother invites Ellie and her sisters to a house party. Now Ellie has to scramble to keep Hugh from knowing she’s the stable girl he wants to marry, while simultaneously trying to win his trust as herself. Can she keep her costumes straight long enough to save her family? And even if she does, will it be worth losing his love?


Author Bio: Elf Ahearn—yes, that is her real name—lives in with her wonderful husband and a pesky (yet irresistible) cat. Learn more about her at elfahearn.com or friend her on Facebook.


The Glass Orchid by Emma Barron

Orphan Adele Beaumont spent her childhood being passed around to cruel or indifferent relatives. She quickly learned the harsh lesson that a fatherless, penniless girl becomes an unmarriageable woman, leaving her alone and vulnerable to the whims of society. Determined to take charge of her own fate, decides to pursue the only means to an independent life available to her: become a courtesan to wealthy and powerful men.


Rhys Camden has just turned twenty-one and is now employed as factotum in his father’s shipping company. He is eager to find his place in the world, but he finds himself fighting against his father’s control as the elder seeks to increase the family’s social standing to match their newfound wealth.
After a chance meeting on a foggy street, ’s and ’s lives become increasingly intertwined. Their passion for each other ignites and, realizing there can be no true freedom without love, they vow to defy society and family and risk everything to be together. But they soon learn how dangerous that defiance can be.

Author Bio: Emma Barron lives in upstate with her family and two dogs. When not writing, she’s usually chasing her daughter, starting house projects she makes her husband finish, or killing all the plants in her garden. Learn more about her at www.emmabarronbooks.com, find her on Facebook, or follow her on Twitter.


Brave In Heart by Emma Barry

Theodore Ward is a man of deep passions and strong principles—none of which he acts on. So Margaret Hampton ends their engagement, breaking both of their hearts in the process.


Years after their estrangement, ardent but frozen Theo attempts to reconnect with Margaret. She is no longer trusting of the idea of romantic love, having become pragmatic and wary during decades alone. But with the drumbeat of the early days of the Civil War in the background, how can she refuse?


The courtship that results is hasty, reckless, and intense, fueled by contradictions between Theo’s willingness finally to change and Margaret’s fears about the future. Two smart, stubborn, fiery people will need to overcome the hesitancies of their hearts and the perils of battle if they’re ever to find happiness.


Author Bio: Emma Barry is a (former) Montanan who loves hugs from her toddler twins, Earl Grey tea, her cat’s whiskers, and her husband’s cooking. Learn more about her at authoremmabarry.com.


Once A Duchess by Elizabeth Boyce

Isabelle Lockwood was a duchess, until her husband of only a few months wrongfully divorced her for adultery. Since then she’s been a pariah, living in anonymous exile to escape the prying eyes and wagging tongues of the ton. More than anything, Isabelle longs for a family of her own, and so has to marry again. But society is ruthlessly unforgiving. To clear her name, Isabelle must face down her past—and the man who broke her heart and ruined her completely.


Marshall Lockwood, Duke of Monthwaite, was blindsided by his young bride’s infidelity. After the divorce licked his wounds, throwing himself into his botanical studies to forget his disastrous marriage. Now his former wife is back in Town, as beautiful and enticing as he remembers. As the Season throws them together again, can’t shake the feeling that Isabelle might not be the adulteress he took her for.


Author Bio: Elizabeth Boyce lives in the southeastern with her husband and several rambunctious children. She likes to think in the shower, sip wine, and pretend she has a cooking show.

856 CE, is a land of myth, magic, and blood. Viking raiders have fought the Irish for over half a century. Rival Irish clans promise only betrayal and carnage.


Kaireen, daughter of Laird Liannon, is suddenly forced into an arranged marriage with her sworn enemy, a Viking. She refuses to submit. With no mention of love, only land and the protection of her clan, she endeavors to get her betrothed banished from her country. Will love find its way around her stubborn heart?


Bram, the Viking, finds himself without future or inheritance as a younger son in his family. A marriage to the Laird’s daughter would grant him land if he swears fidelity and if his men will fight along with the Liannons against any foe—Irish or Viking. However, the Laird’s feisty daughter only holds animosity for him and his kind. Is marriage worth the battle scars of such a relentless opponent?


With the blame for a rival laird’s death treacherously set against the Liannons, Kaireen and Bram must find a way to lay aside their differences as an unforeseen darkness sends death snapping at their heels.


Author Bio: Andrea R. Cooper grew-up creating characters and never stopped. Fantasy, paranormal and historical romance are her favorite genres to read and write. She lives in and when not writing or reading stories, she likes to dance when no one is watching.