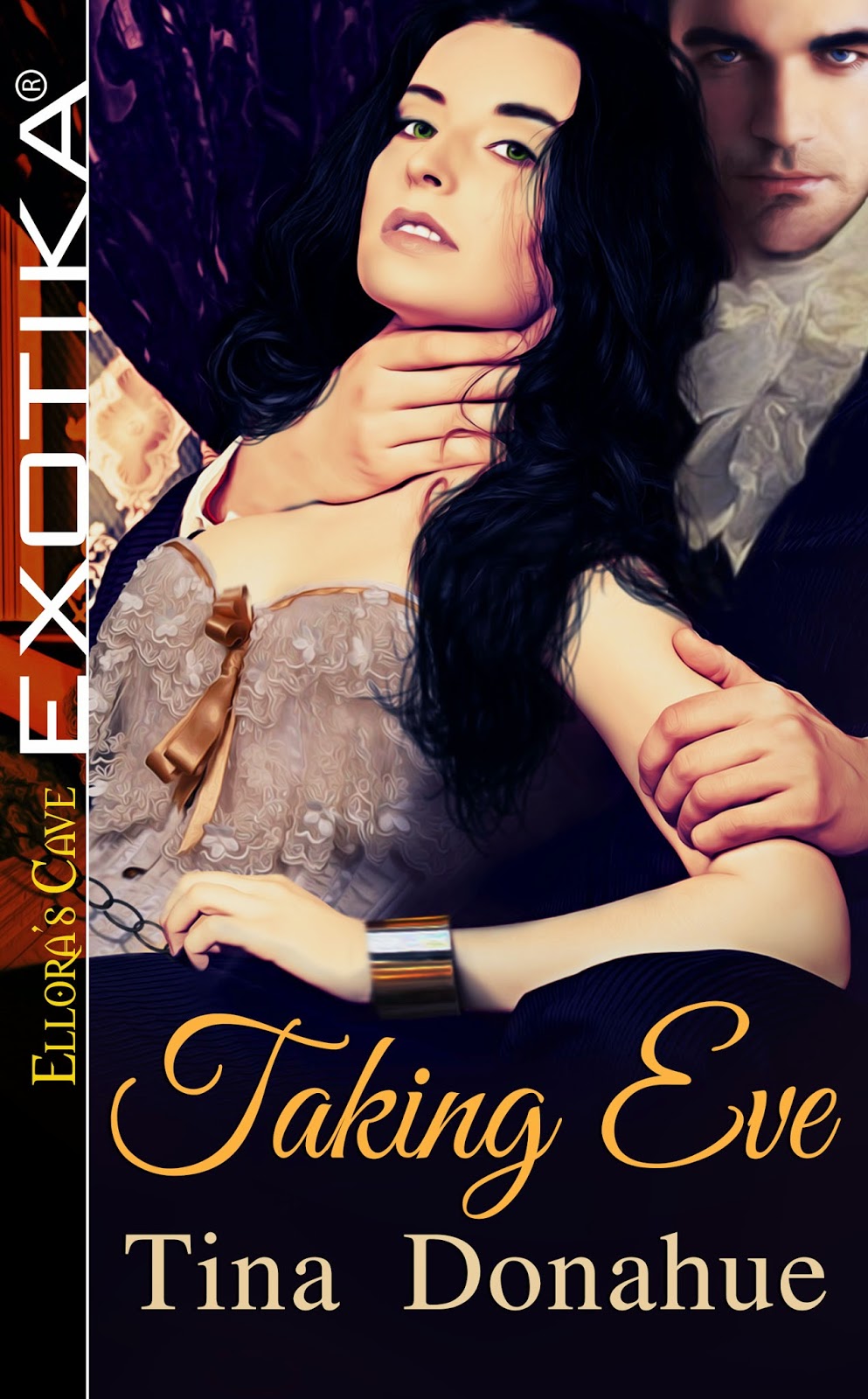 Dreams of a manor where submission and dominance once ruled draws Faith to hypnotherapist Colin Danes. Potently virile, he looks remarkably like her most cherished master from a past life. Desire smolders in his eyes, proving he’s never forgotten her.
Their carnal dance continues in the present and leads to their past when she was known as Eve. Through hypnotherapy, Colin brings her back to the Victorian era, a hidden estate where she eagerly submits to whatever he and her other noble masters crave. The exquisite discipline of the strap. Being bid on and mounted each night. Displayed and used for the enjoyment of all.
Most will take her. One will try to imprison her. Only he will be her true master in that life and this.

The advertisement challenged, Are your dreams so real they seem to have come from another time?
Faith Montgomery gripped the mail circular. Its paper made a sharp, crackling noise, no different from ice snapping.
Frigid wind swept past, delivering more snow. Feverish and unsettled, Faith stood in front of the medical arts building that catered to doctors, nutritionists, shrinks and hypnotherapists. Unlike Seattle’s typical brick or glass structures, this place had a granite façade and steepled ceilings. Similar to a castle where dominance, submission and punishment played out. Where men wore dated clothing, while women were nude, defenseless, sighing then crying out their arousal and pleasure.
Her mouth went dry.
From behind, a car’s horn blared, sending her pulse into a faster sprint. Traffic continued to crawl along the slick streets, headlights brushed past, illuminating the building’s directory. Faith didn’t bother to search it. According to the circular, his office was on the second floor. Her appointment in a few minutes, made earlier in the week by phone. The first time she’d heard his voice and yet not the first time.
“Why do you want an appointment?” he’d asked.
Something inside her had fluttered at his smooth baritone, enticing and strangely familiar, reducing her to silence.
“You’ve seen things,” he’d coaxed. “Felt things.”
God, yeah.
While he’d waited for her response, she’d stared at his picture on the glossy flyer.
Several locks of his hair—thick, wavy, the color of espresso—grazed his forehead. His strong, masculine features were handsome as hell, nearly aristocratic. In her mind, Faith saw him dressed in eveningwear, the kind worn during the early Victorian era. A coat with tails, snug at the waist to accentuate his impressive shoulders. Dark trousers and a shockingly white cravat. Identical to heroes in romance novels that she’d read in high school.
He definitely had those guys beat.
His long-lashed eyes were a striking blue. Even from the picture, they stripped Faith of all privacy, reaching into her soul, the same as the promise of his full, rich mouth. A hint of stubble graced his upper lip, chin and cheeks, virile and tempting. Young, possibly early thirties, he was the kind of man a woman wouldn’t forget.
Faith certainly hadn’t.
“Yeah,” she’d murmured during the call, at last answering him. “I’ve had recurring dreams, flashes of another time.”
You.
Rather than questioning her further, he’d given her the last appointment of the day, well past the time other professionals did business. His office windows were the only ones lit on the second floor, the lights’ golden glow spilling onto the street. Waves of snow, carried by the wind, twinkled like stars within the brightness.
Faith half-expected—and fully hoped—he’d be at the window, looking down at her. Watching. Waiting. Anticipating as she was.
He wasn’t.
His absence only stoked her stark need. Clearly, he had no doubt she’d keep their appointment. Now, as before, he commanded and figured she’d obey.
On an edgy sigh, she entered the building. Heated air and the scents of polished wood, leather, wool washed over her. In the absolute quiet, she heard each click of her heels across the floor, a dark-green marble veined with white.
Faith avoided slick spots made by others who’d come and gone, tracking in the snow. She should have worn more practical shoes in this weather, pants instead of a skirt, but hadn’t, sensing he wouldn’t have approved.
Like one possessed—or commanded by a Master—Faith climbed the stairs, reaching the second floor. The walls were paneled in polished walnut, which gave them the air of a private club where men called the shots. Their decisions law. Their desires the only rule that counted, no matter what they demanded. A woman’s full surrender to their needs. Having her down on her knees before them, her lips parted for the taste of a thickened cock or to release her whimper of delight at the strap one of them held, eager for him to discipline her.
Lightheaded and breathless, she stared at the hall. His office was at the end, the door open, a wedge of amber light demanding she go inside.
No receptionist greeted her in the snug waiting room. Faith hadn’t expected one, figuring he’d want them to be alone. Exactly what she craved.
She inhaled as deeply as she could. Leather from the burgundy chairs perfumed the small space, claiming it for a man. Beyond the reception area was his office, the door open. He stood at his desk, his attention on a book he read.
Her legs went watery. With indecent curiosity, she drank him in, the charcoal sweater and dark trousers that matched the color of his silky hair and fit his powerful frame so well. Broad shoulders. Muscular thighs. She forced down a swallow, knowing there was raw power in his strong hands. She’d dreamed of it, had seen glimpses in her mind.
And would do anything to experience it again.
As though he’d heard her thoughts, he closed his book with a faint snap and looked up.
Time shifted, the past bleeding into the present. Faith forgot to breathe or to step closer, trapped within his potent gaze, overwhelmed with a sense of recognition, irresistible and welcoming.
I know you…you know me.
Unmistakable longing flared in his eyes, the same yearning she felt. Beneath it was a flash of lust.

Please leave a comment. Tina will be choosing one winner randomly from the comments section. The winner gets her choice of one of Tina’s backlist ebooks – FIFTEEN IN ALL – contemporary, paranormal, suspense, ménage. From this list: