Cruise of a Lifetime: Day 5 – Santorini (aka Atlantis) 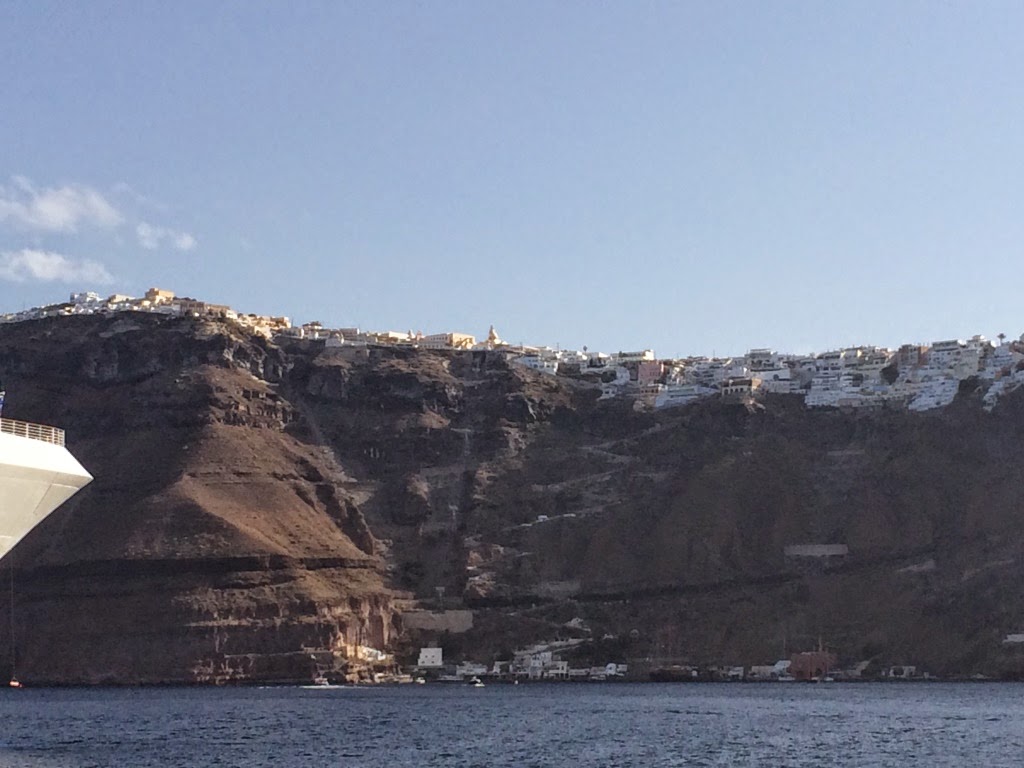 In the early morning hours (2am or 3am depending which time zone we were in), we were treated to the sight of an active volcano off the starboard side of the ship!  As we cruised by Sicily, we could see on a small island, lava flowing down one side of a mountain while a small town with lights  could be seen on the other side! Of course it was very dark and there may have been water between the town and the volcano, but to say it was a fascinating sight would be an understatement. Unfortunately, my pictures didn’t show much :-( 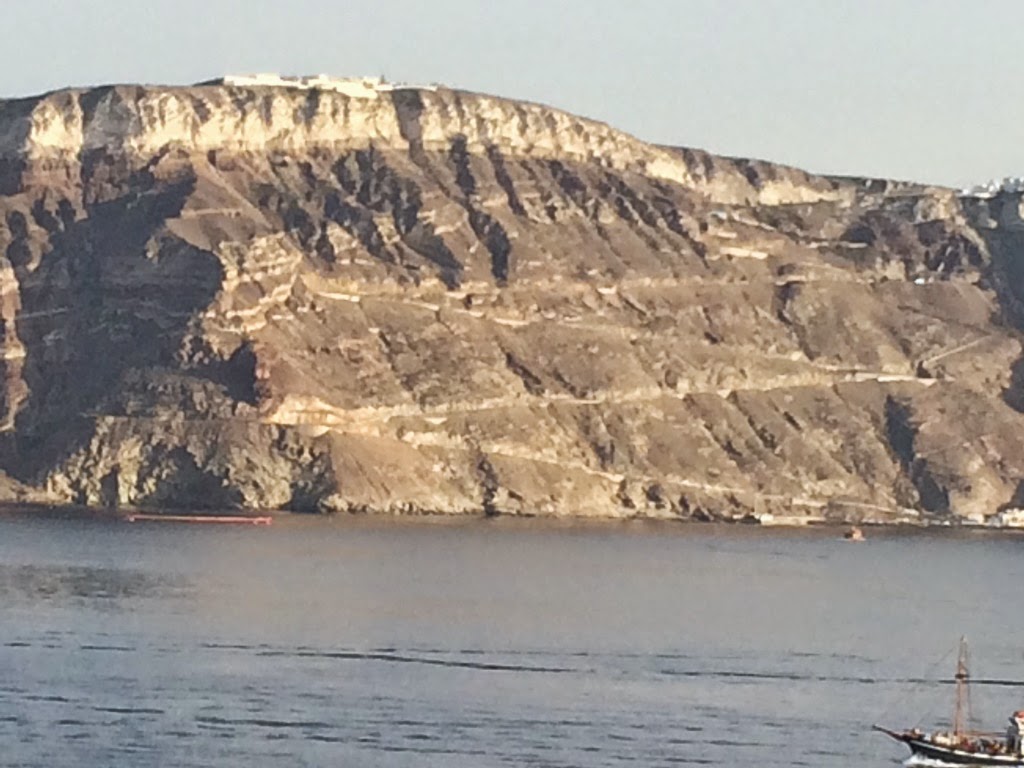 So after a relaxing day at sea and very little sleep, we were ready to enjoy the Greek island of Santorini, which is actually called Thira by the Greeks (The word Santorini is Italian). The boat anchored off shore so we were able to approach the island as many did when it was first settled, by small boat. Talk about impressive and intimidating. Exactly how were we going to get all the way up there?

A new switchback road had been built and we made it to the top of the island, but that wasn’t high enough. Nope. We went to the very highest point where we could stand before a monastery and look down on the island and the entire area that had once been Atlantis. According to our guide, this piece of land and two nearby that form an arc and the open sea between had once been Atlantis. 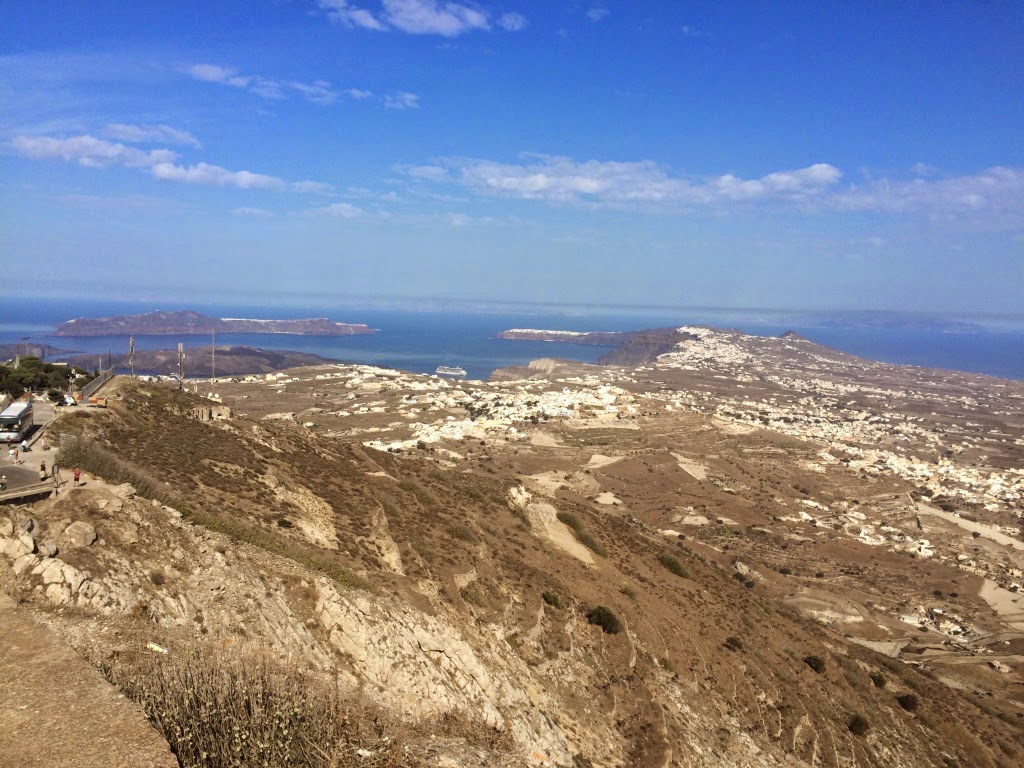 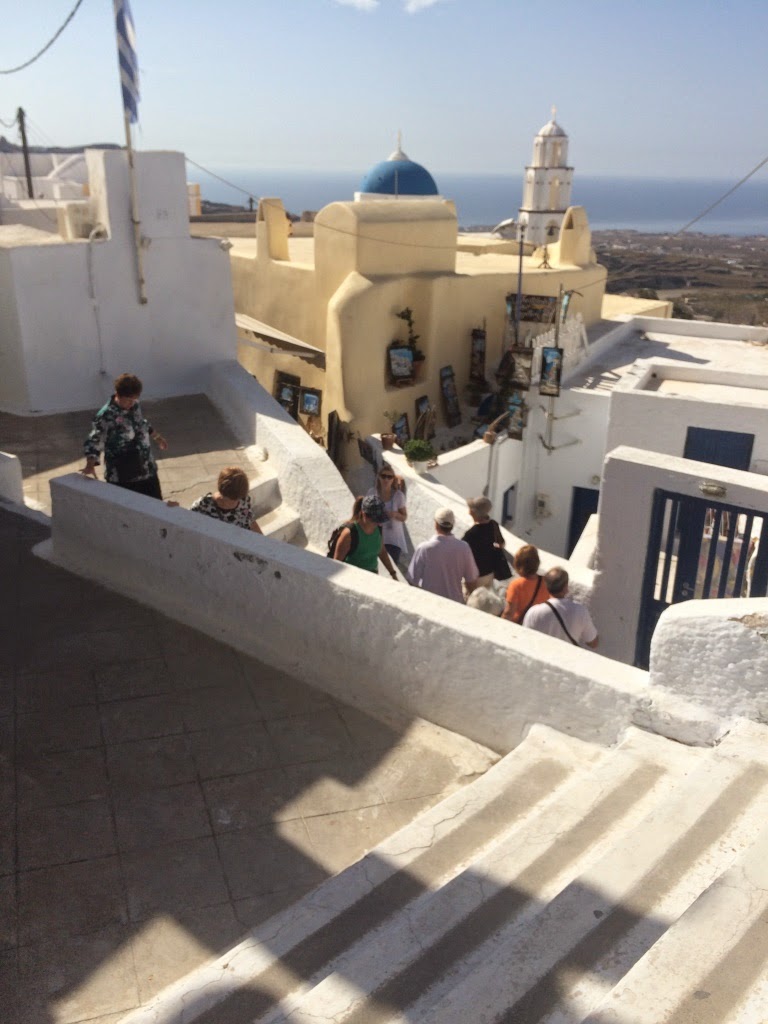 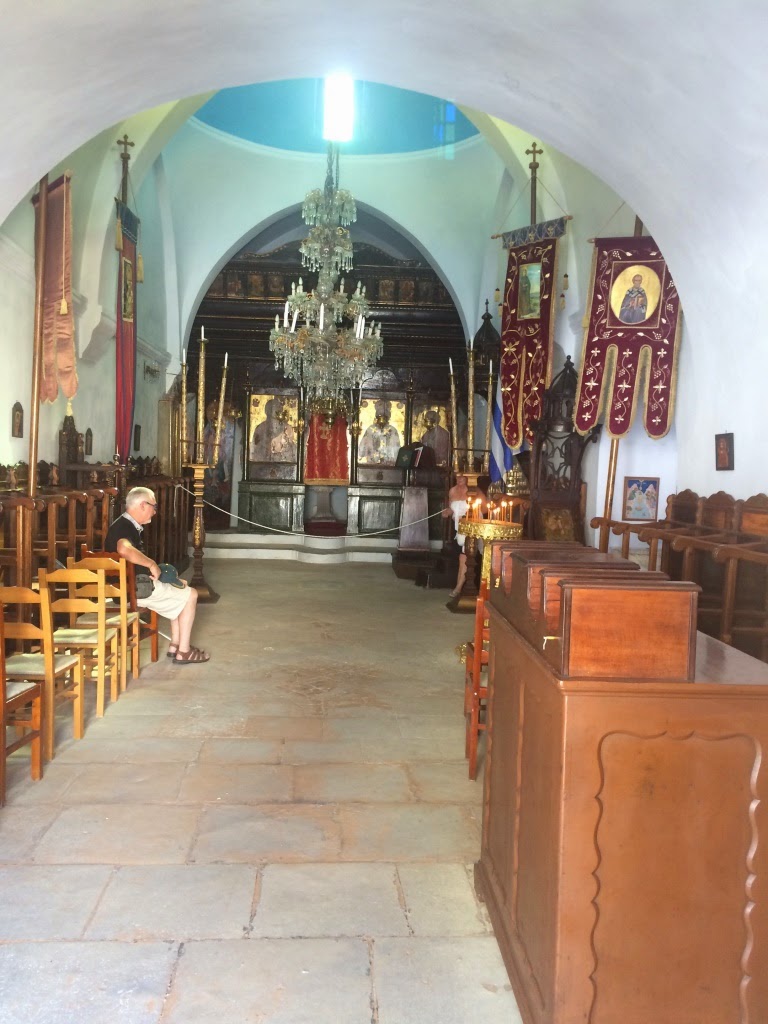 After this beautiful sight, we moved on to the village of Petros. Here we were able to tour on foot (the only way to get around) an area that gave us an idea of how the average person lived. We also learned about the famous blue domed churches. They are part of the Greek Orthodox religion (about 90% of the island, 10% are Roman Catholic) and as it turns out, each church, all of which are privately owned, is built to celebrate a saint. On that particular saint’s day, the church is opened and services are provided for any who wish to come. Otherwise, the church is closed. There are exceptions with the very large churches which provide services more regularly. 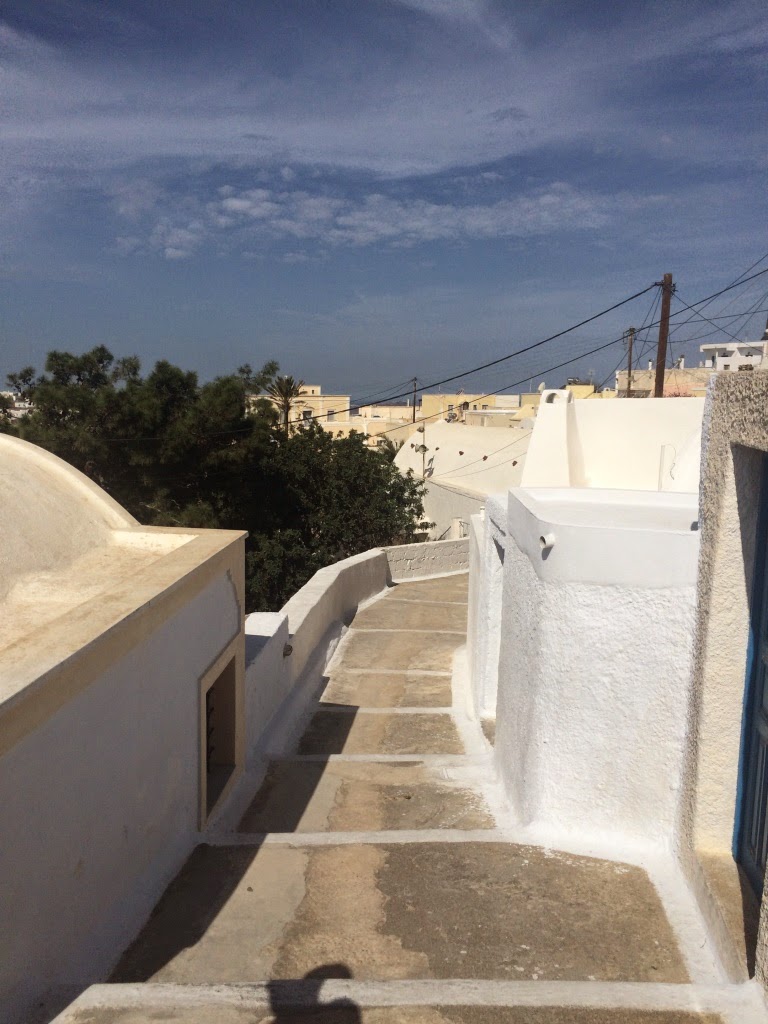 I absolutely loved walking through the walkways of this village.

Of course, all that walking made us hungry so we stopped at a wonderful restaurant for a lunch of Greek cuisine such as stuffed grape leaves, olives, spanakopita and tzatziki sauce (my favorite). Yum.

Then it was on to Fira, the island’s capital city. It was as beautiful as seen in every movie, magazine or website. I fell in love with this place and wished I’d seen it when I was younger because I would have definitely lived here for awhile :-)
Since there was no dessert served at lunch, we just had to stop for a drink and dessert and enjoy the amazing view. When it was time to go back to the ship, we took the cable car down to another little port. Every car seated 6 people. The ride was way too fast and in no time we were looking back at this amazing place from our little boat. 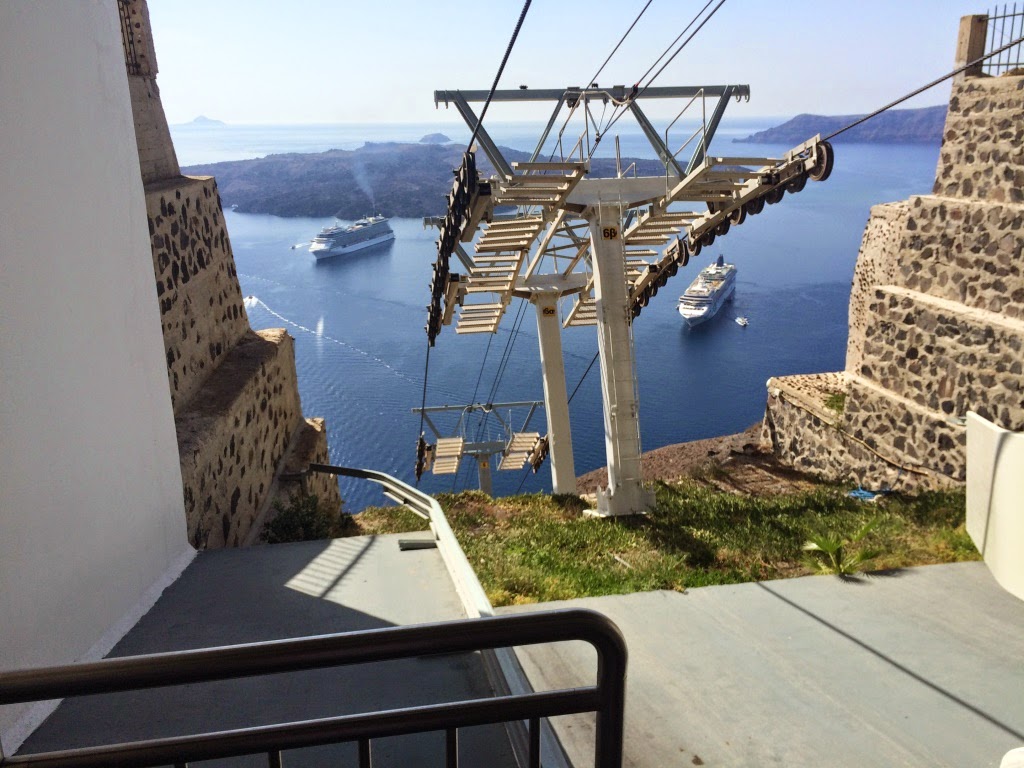 Santorini is one of those places that I would love to return to for a long vacation. Luckily, they do have a small airport, so that possibility is definitely there. 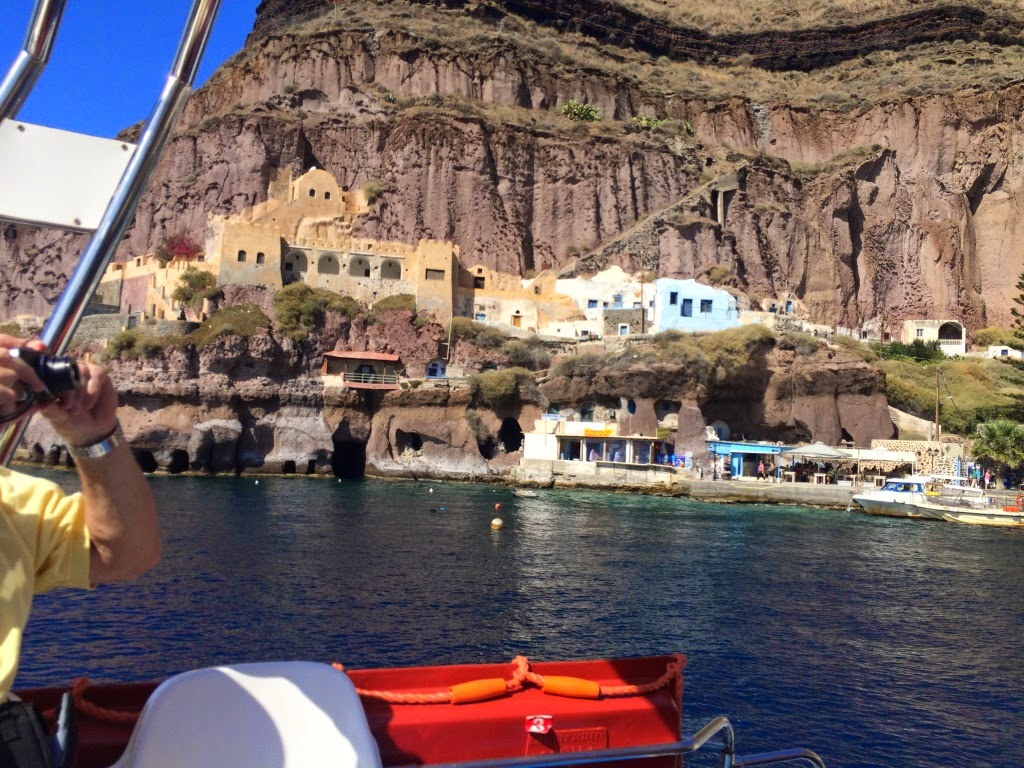 Once back on the ship, it was the usual routine of dinner, the show, dancing and into bed far too late. We didn’t want to miss a minute of this amazing trip.