For those of you who know my writing style, having to write about a no nonsense ex-Army sergeant pushed the boundaries of my normally light, quirky romantic suspense novels. As a side character to my Nadia Wolf series, Remy had only the occasional spot light. His story needed to be told. The result: AWESOME!!! 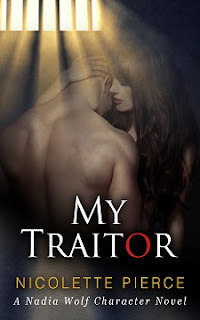 Remy Bourne’s view on relationships with women was crystal clear to everyone who knew him. He didn’t do them. Except once. And for that error in judgment, he paid the price in blood. Unfortunately, it wasn’t only his.


Ava Hunt was a part of Remy’s platoon. Her sole job was to get behind enemy lines and rescue soldiers. She worked hard, she fought hard, and she was the only woman that he had ever loved.
And she was a traitor.


After an excruciating stint in enemy prison — thanks to her — and six years of guilt — thanks to her, again — Remy finally rid her from his system and was ready to move on. But Ava had other plans and hunted him down. What could she possibly want from him this time that she hadn’t already carved from his chest six years ago? Remy intends to find out and stop her, but when Ava returns, so does the haunting past, threatening not only his life and those close to him, but his conscience as well.
Ava will force Remy to help her, if necessary, because she won’t take no for an answer. She has no qualms about fighting dirty to get what she wants — what she needs to survive. The only problem: Fighting dirty with Remy was what sparked their affair so long ago; something neither Remy nor Ava were prepared to rekindle.

This is a standalone book that can be read on it's own or following the Nadia Wolf series. Check out my website for more information, including links to purchase. I hope you enjoy!

Posted by Nicolette at 9:34 AM