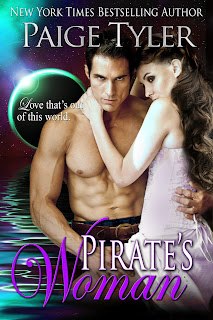 I've always thought pirates are so damn sexy! Blame it on all those historical romances I read as a teen. There was nothing hotter than a big, strong handsome pirate falling for the feisty woman he either kidnapped, rescued or a combination thereof!

But while my experience with pirates was in the historical genre, I didn't want to write an historical. Instead, I wanted to do sci-fi. And I wanted it to be hot! So, I came up with a story about a beautiful woman named Teyla who agrees to let the sinfully handsome pirate Slayter sell her as a sex slave on the auction block in order to pay off the enormous debt her family owes him. Teyla is determined to bring in as much money as she can, but is afraid she won't fetch a high price because she's inexperienced when it comes to men. That's when things get really fun because she asks Slayter if he'll teach her how to pleasure a man. Just to improve her value, you know? Of course, he agrees. How could he say no, right?

Now, here's where the story gets complicated. While he's instructing her on how to be a sex slave, Slayter starts falling for Teyla, and she for him. But she agreed to pay off her family's debt and he needs the money for his ship and his crew. What can either of them do?

You'll have to read the story to find out! And to give you added incentive, I'll tease you with a steamy excerpt.

Blurb:
Love that’s out of this world…

To honor the debt her family owes Slayter Cardona, beautiful Teyla Dunai agrees to let him sell her as a sex slave in the markets of Arkhon. Determined to bring as much value as she can on the auction block, but inexperienced where men are concerned, she asks the handsome pirate if he’ll teach her how to pleasure a man. Intrigued, and more than a little attracted to the lavender-eyed beauty, Slayter agrees. But as he initiates her into the world of bondage, spanking and out-of-this-galaxy sex, both Teyla and Slayter find themselves falling for each other.
Slayter has a responsibility to his crew, and Teyla knows it is her duty to pay off her family’s debt. With the deal already agreed upon, there doesn’t seem to be any way for their story to have a happy ending. Until Teyla is kidnapped…and they reach the slave auction house…and Slayter has to find a way to reclaim his own “sex slave”.

Paige Tyler is a New York Times and USA Today Bestselling Author of sexy, romantic suspense and paranormal romance. She and her very own military hero (also known as her husband) live on the beautiful Florida coast with their adorable fur baby (also known as their dog). Paige graduated with a degree in education, but decided to pursue her passion and write books about hunky alpha males and the kickbutt heroines who fall in love with them.