When The Bad Guys Get Their HEA

Recently I watched the movie Suicide Squad. Didn't know anything about it at the time, wasn't expecting much out of it, and thought if nothing else it would be an entertaining afternoon. What I didn't expect was for it to take place in the notorious Gotham City, nor for it to have a love story in it. Not your normal love story, mind you.  There was no chiseled handsome man and a winning beauty on his arm. Blah! No, this was the Joker and his psycho girlfriend Harley Quinn.

It was messy, chaotic, and entirely wrong . . . yet it was quite perfect. For them. And for me to shift my loyalties from the Dark Knight to the Joker, Harley, Dead Shot, and the rest of the misfit crew was astonishing. Not that I'd be loyal for long. They do need some redeeming qualities to make them turn from bad guy to hero (some of them did).

Either way, it was refreshing to get into the darker mindset for a brief time and see glimpses of good still trapped in them. And, while I still think they need serious meds and jail time, I'm left with empathy for them. If only that could happen on large scale in the real world, we might not have so much hate but understanding.

On that note, I promised myself to someday sit down and write a story in a POV I'd probably be uncomfortable with. One that may or may not have a HEA. Because not everyone gets one and not everyone deserves one.

But that's for later.

Right now, I'm plotting my way through Fearsome Foursome, a Mars Cannon novel, which should release in October. 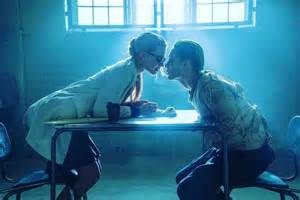 Harley Quinn and Puddin (AKA the Joker)