The Evolution Of a Story—The Good, The Bad, and The Ugly.

Okay, when I draw a blank, I sometimes look at memes to draw inspiration.  Hey, don’t judge.  It’s been a rough month.  I had a book to write and, of course, life ran me over and I didn’t start the damn thing until three weeks before it was due.  YIKES!  So, here I am, the night it’s due to be uploaded, and I’m still formatting it...and doing random edits in between adding a Table of Contents, beefing up a love scene, and trying to come up with something clever to blog about.

So I found a meme a couple of days ago which depicted exactly where I was at the time.  I had moved from Box 1, where my story was hilarious and I loved it, through Box 3, where I decide it might not be as hilarious as I thought but it’s funny.  Then it’s sorta funny, seemed funny at the time, and now I’m in Box 8, where it’s not a damn bit funny.  NOOOOO!  My humorous romance sukkkks!

I’m freaking out, I’m out of time, I can’t fix this mess, I’m going to hide in a very dark closet.

So, I call on my muse.  The bitch shows up in a cheerleader costume, with pompoms.  She is repetitive...she is annoying...and she is freaking useless... 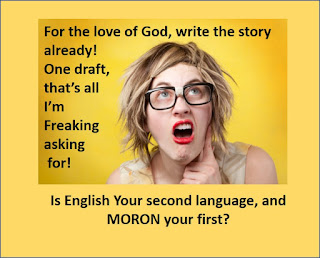 But I’m still trying.  I tell her to up her game and see if she can’t do something that will actually...I don’t know...help, maybe?!  This is when the snotty little witch turns sarcastic, and tries to shame me into writing the story.

Yeah, that still didn’t work...sounded too much like an old boss I had once.

Then the deadline really got tight when I had only a week left and I was only five chapters in.  That’s when my muse finally came up with a method that would work... 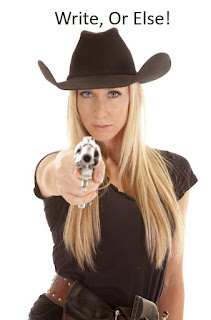 Not nice, but effective...I always did work best under pressure.  LOL

Now I’m a couple of days down the road and I’m in Box 10 where I’m starting to think maybe it really is a little funny.  My hope is that by the time the story hits the internet shelves, I will be in Box 11 or 12, and the damn thing will be back to H-I-L-A-R-I-O-U-S!  Fingers crossed!!!  If you’re a writer, you’ve been here.

Okay, through all of that, I persevered and the story is written...and it’s fun...I think...I hope!  But you’ll have to be the judge of that when it comes out on the 19th.  So stay tuned for more announcements and excerpts from this masterpiece. 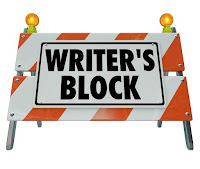 I survived the process and managed to defeat writer’s block...which is where your imaginary friends refuse to talk to you. And no matter how hard you try, they won’t say a stinking word.

But there is always another story to write, always another plot to create, characters to wrangle, and more writer’s block to overcome.  So if you see me out and about at the mall, remember... 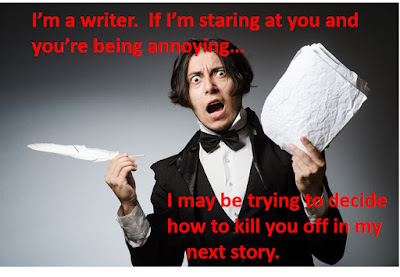 So be nice!  I’m under deadline, under pressure, and hanging by a thin thread.  LOL And I may be looking for someone to kill off in my next story...don’t be THAT person.

Kayce
Posted by Kayce Lassiter at 3:45 AM