Hello.  My name is Ruth E. Wolfe.  I write as R.E. Laurel.  I have lived my whole life in Western Pennsylvania among the foothills of the Appalachians in Armstrong County.  I live in a ranch style home with my husband Tim; Jack Russell Terrier and three rescue cats.  Other interests of mine include photography, dried floral arranging, loud muscle cars, Paranormal Investigator, yes you read that correct so a few novels with paranormal tendencies are in the making.

I write sweet sensual hot sexy romance.  Recently, I self-published my work through Createspace where they are available and also can be found on Amazon and Kindle.  I found my love for writing in school and began in the 80's writing off and on when time permitted.  My main genre is Women's Contemporary fiction, sexy romance, steamy romance I should add.  Humor can be found in my stories.  My readers told me they love how I pull them into the stories.  By the time this blog is released I will have a paranormal romance, nothing gory, also released.  THE TIME REMEMBERED.
I have five published my recent a holiday story titled, WHAT A NEW YEAR’S EVE.

Lexi: What made you chose your title?
Ruth:  I chose that title because I mainly see holiday stories set around the Christmas season. I thought, why not do one for New Year’s Eve.

Lexi: What has been the best piece of advice you ever received for your writing career?
Ruth:  Write from your heart.  Write about something you know and if you don’t know about the subject, research, research and more research.  Do a storyboard where you paste pictures depicting your story in the process will help keep your story in order.

Lexi: What was your first writer’s conference?
Ruth:  Sadly, I’ve never made it to a writer’s conference.  I was involved for a few years with a fantastic bunch of published authors where we met monthly and I received a lot of my advice.   We talked about our current WIP and often would read portions of the story and get critiqued.  We also had online group via e-mails which were great if we couldn’t make meetings.  Actually, the e-mail group is still in process and that has been for over ten years.

Lexi: Why did you choose this sub-genre of romance?
Ruth:    Romance is something I know about  (wink)  I love romance, humor, and wondering how people meet the right one.  Accidental meetings are wonderful to plan and write about.  A few others are lost loves returning home after a bad life experience.
My motto is ‘Let me take you to chance meetings, romance and falling in love.’

Lexi: What has been the most memorable fan comment you ever had?
Ruth:    My husband and I took a bus trip to Mackinac Island last year.   Word got out about an author with them.  An elderly lady downloaded my first release Still Loving You.  Each time she would see me out in the group she made a point to come to me with a naughty smile on her lips and would just say, “That Matt.”   I answered, “I know, right?”  She would put her hand on my arm and reply, “Don’t tell me another thing.  That Matt.”
People who read them tell me they can’t put them down and also approach me and talk about my stories as if they know the characters.  I take that as a great compliment. 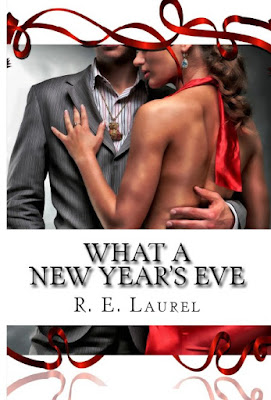 WHAT A NEW YEAR’S EVE - blurb


Victor Montgomery Neal the VI is heir to Neal's Emporium.  Born into a family of extreme wealth and a family who fails to show affection it has made him cold-hearted and non-caring. Always being the roaming love them and leave them type until he meets employee Maren Wilson. Her beauty and authenticity hits him hard and not like other women who knew him and always agreed with whatever he would say, her bluntness leaves him captivated. She doesn't know his true identity as he chooses to keep it a secret. Due to cutbacks, she is one of many he is forced to let go but still, she feels sorry for the ‘new guy’ and asks him to join her family for Thanksgiving. Surprising himself he agrees to go with her instead of flying off with friends to warmer places.

Maren has a heart of gold, always thinking of others over herself.  She gives herself 100% with whatever she finds herself involved doing. Quickly he learns what the meaning of the holidays is really about.  He can’t understand how but he quickly loses his heart to her and wonders how he can capture hers.  When a snowstorm hits, stranding him at her home, it promotes the opportunity and brings many surprises to both.

EXCERPT OF WHAT A NEW YEAR’S EVE.


“Sex is nothing to take lightly.  I want to have the romance, the feelings of respect, love.  Of being the one.  Not just being hit and then left alone.  I love the thought of monogamy, of having the commitment.”
“That’s asking a lot if the relationship is new, don’t you think?”
She shrugged.  “If you meet the right one and just know it then, giving yourself to them early in the relationship could happen,” she muttered.
“How early,” he teased, gaining a smile from her.
Maren squealed when she suddenly felt his arm shifting on her shoulder and found herself being turned and pulled onto his lap.  In one smooth move, his arms wrapped around her waist, holding her against him.  Her legs stretched out on the couch, her hands resting on top of his shoulders.  With wide eyes, she looked at his handsome, serious face.
“It’s hard for me to believe we’ve only known each other two weeks.”  His voice was sincere as he looked directly into her eyes.
“I’ve thought the same.  It’s already hard for me to imagine my life before you walked in.”  She confessed.
“And spending practically every hour with you for the past few days have really meant a lot to me.”
“I’ve enjoyed you with me too.”
“You’re so damn adorable,” he muttered before easing her face towards his to cover her lips with a slow kiss.
Maren returned his kiss with such fervor that she knew she surprised him as he eased slightly away.  His hand slid through her hair, splaying his fingers at the back of her head to hold her closer.  His mouth covered hers again with a heated response.  Slanting over her delicious mouth forcing her mouth opened, his tongue slid entry refusing to release the contact, needing more of her, getting drunk on her kiss on her presence.  The touch of her gentle fingers at his chin set his heart racing, aching for more.
Risking the temptation, he slid his hand to her breast, pausing for her to ease away but her groan of desire filled his ears.  Her tempting sinuous moves against him were a silent plea to be touched deeper than just a caress.  Daring to pursue further, he trailed kisses down her neck towards the mounds beneath her shirt.  He felt her torso lean back, arching towards his touch.  His mouth eagerly covered where his hand just vacated, feeling the hardened peak beneath the material.  His teeth gently tugged on her shirt.  Her gasp of pleasure filled the room gaining a fiery response through his veins.
Oh Gawd, she was more than just a woman.  She was someone he wanted to stay with.  That revelation brought an instant stop to the preliminary love making.
“What the?” She gasped.
He sat back to gaze into chocolate brown eyes filled with passion and desire and confusion.
“I need to go.  Yea, I just remembered some business matters that I really need to attend to.  And, I have a few errands I need to run before any stores close,” he explained.
“But…”
“Let me put it to you like this.  If I don’t leave now, this could very well end with us making love and you don’t deserve that to happen like this.”
Her brows furrowed.  “But…” she repeated.  He held her by the upper arms and stood so fast then released her that her body bounced back onto the cushions.  She raised herself upon her elbows, watching as he hurried around the couch making a hasty exit towards the doorway.  “For the record, I’m beginning to think that you never had sex yet,” Maren brazenly stated at his retreating back.
Victor’s eyes widened.  Turning around he cautiously returned to the parlor where he saw her still laying on the couch.  He quipped, “I’m beginning to think I’ve never had sex with anyone like you.”
Maren grasped the back of the couch to pull herself up to gaze over the back at him.  “I’m beginning to think you’re never going to.  Not with the way you take off whenever things begin to heat up.”
“Not yet.”