Until Dark by Mariah Stewart

Kendra Smith has experienced the old adage of “you can run, but you can’t hide” from your problems.


Her problems include an emotionally distressing past in the loss of her family members one at a time ranging from murder, suicide, and just plain unexpected death.


Kendra took herself and her work as an FBI sketch artist from the west coast to the east, back to the scene of the (former) crimes. 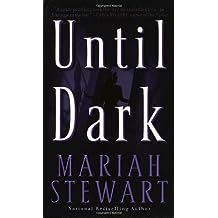 As soon as she moves to her original home space she’s called in to sketch for a serial killer.  Not only is she in the scope of the killer, but she’s on the team of an old flame, Special Agent Adam Stark.  They have a short history that never evolved.  As the reader, I hope it does this time!


And I have to keep hoping because Kendra has so much going on with the loss of her brother then her mom, that it’ll be hard for her to separate mixed messages from their graves, her current work, and a man she wants, Adam, and doesn’t know if it’s still reciprocated.


The story moves along rapidly with many twists.  Although, my mind may have been unusually sharp to Stewart’s writing because I had the plot figured out in advance and the romance, well let’s say it was an add-in and could’ve been more complete at the end.


Sometimes a light romance with a heavier suspense plot is in order, and then this is the book for you!