Who throws out a perfectly good space capsule?

Apparently, it happens...and more often than I would have expected.

I recently took a roadtrip with a friend to Southern Arizona, to spend a few days with my good friend, Cheyenne McCray.  On the way, we spied a space capsule out in the middle of a field, next to I-10.  Yep, you read that right...looked like a space capsule fell out of the sky and came to rest in the Arizona desert.  How did it get there?  Did they lose track of it?  Can that even happen?  Was there a momentary black-out on their radar systems?

Thank God it didn’t fall on my house!!!

Being your basic Doubting Thomas, I decided it had to be a hoax and drove on by.  But then when stumped for a blog topic, my friend reminded me of the strange space capsule we had seen.  So, I decided to research it.  Because who leaves a perfectly good space capsule laying in a field in Arizona, anyway?  That must create national security issues.  Isn’t there a department responsible for picking up lost space capsules?

Okay, here’s the deal.  When you have something that goes bad and is no longer serviceable, but is damn heavy, what do you do with it?  Haul it to the dump and pay tremendous fees to have them take it off your hands?  No!  And how would you load it, anyway?  Not gonna happen!

Alright, I’m getting ahead of myself.  The item I’m talking about is a cement mixer.  Yep...you heard that right...a cement mixer from a big ‘ol cement truck has something in common with a space capsule.

Apparently, the cement mixer thing had outlived its usefulness and the wife of the guy who owned it wouldn’t let him bring it inside the house.  So, there it sat, until some clever mind (an artist named Jack Millard) was creative enough to turn it into lawn art, or in this case, field art. 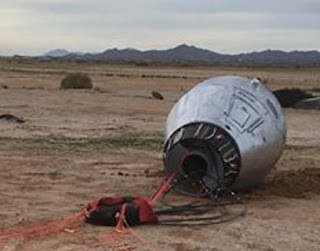 Because here is what we saw sitting next to I-10 between Phoenix and Tucson.  Great, huh?  Well, apparently, it’s so great that people have actually placed calls to 911 to report it.  Imagine how fun that first call was to get!  LOL 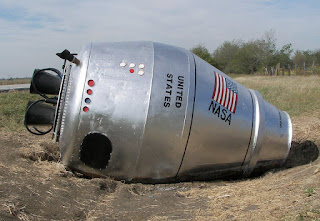 Imagine my surprise when I start snooping around on the internet and run across another space capsule in a field in Oklahoma!  It seems Arizona isn’t the only place to have a cement mixer drop from space.  Apparently, the lost cement mixer of Winganon, is reported to have landed in 2011.

Be sure you go to their page and “like” it!
https://www.facebook.com/search/photos/?q=winganon%20space%20capsule

So...not just one space capsule sitting abandoned at the side of the road, but two!  We have either become the most wasteful society on the planet, or the most creative...I vote for creative.

Anyway, if you are ever traveling between Phoenix and Tucson, watch for the space capsule in the Arizona desert...and be sure to email me if you see it.  I’d love to hear about the strange and unusual sights you have seen in your travels, especially if you’ve seen the sister capsule in Oklahoma.  I’m thinking about making a trip back there in the spring...so I need an address.  LOL