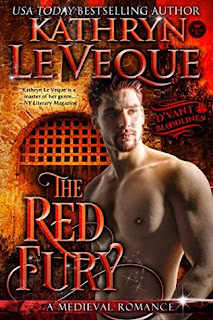 Review by Veronica of The Red Fury by Kathryn Leveque

“I love you, Joey…for all time, I shall love you, more than my own life.”
“And I love you…If you should die tomorrow, wait for me at Heaven’s gate. I shall not be far behind you.”

Josephine de Carron is a powerful Countess that has inherited the title and Castle Torridon after the passing of her brother and father. Determined never to be considered weak, Josephine learns the skills of fighting and is known as “The Little Soldier”. But regardless of her courage and fighting skills, her beloved home has been under siege from a rival Clan, and she is left with no choice but to hire out assistance. Andrew d’Vant is a ruthless mercenary with a liege of 1,000 men fighting under the banner of The Red Fury; a name that strikes fear in all. Andrew and Josephine are soulmates drawn to each other from the first day they meet. “I think I have always loved you…I cannot remember when I have not.” There is nothing they won’t do for each other. But there are dark forces working against the lovers, and even the powerful King of Scotland is no match for the evil that dares to try to take the beloved Josephine from The Red Fury.

The Red Fury is absolutely one of the best books I have read in the genre! I cannot recommend it enough!!!

If you loved The Wolfe, Rise of the Defender, and The Dark One: Dark Knight, welcome to the original Le Veque epic Medieval saga of THE RED FURY. England and Scotland collide in this blockbuster tale of revenge, betrayal, hope, and passion.
1233 A.D. - A young woman forced to command her father’s battered Highlander army upon his death. Her only hope in saving her home, and her life, is with a fearsome mercenary called The Red Fury.

Elisabel de Carron is a young woman with a massive legacy weighing on her slender shoulders. As heiress to the Earldom of Ayr, she is a cousin to the king through her mother, and the king considers her a most valuable bargaining tool in the politics of Scotland. But Elisabel isn’t a willing pawn for the king – she’s only concerned with saving her family home, Castle Torridon, from the repeated attacks of a former ally. After a particularly nasty siege, Elisabel realizes that they cannot withstand another and she is forced to summon the most feared mercenary in Scotland, a man known as The Red Fury.

Andrew d’Vant is a paradox – an English knight, he escaped his wicked brother years ago and fled to the highlands of Scotland, forming one of the most rag-tag and fiercest mercenary armies the world has ever seen. He has become very rich by fighting – and winning – other men’s battles. Summoned by Elisabel, Andrew’s price is too high for the beaten castle but his instant attraction to Elisabel has him accepting the task for far less than his usual fee. There’s something about the strong, battered, and beautiful woman that draws him in.

But The Red Fury gets more than he bargained for.
A simple task of defending a castle becomes an enormous and complex tale of adventure, suspicion, royal intervention, and dark family secrets. When Elisabel is thrust into the king’s politics in spite of her resistance, she finds herself pledged to none other than Andrew’s wicked brother. Now, Elisabel finds herself at the heart of the Kingdom of Scotland and deeply in love with Andrew, and he with her. Andrew must join with former adversaries in order to save the woman he loves from the man who ruined his life.
The Red Fury is in for the fight of his life with the prize being Elizabel. 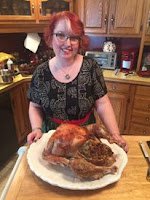 Veronica is an avid reader with a flair for writing honest reviews. She lives in West Virginia with her husband and son.