A Kiss in the Sunlight Cover Reveal 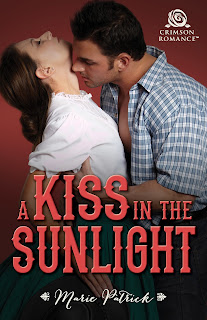 Hello, gentle readers!
I’m so excited to share the cover of my latest release, A Kiss in the Sunlight. I had so much fun writing this one (well, it wasn’t all fun and games…there were tears, too!)
Anyway, I know I’ve told you that this is the last story in the MacDermott Brothers saga, but I don’t think I’ve told you what it’s about…so here goes…
Sheriff Teague MacDermott’s life has been on hold since the Logan Gang rode through Paradise Falls, killing and wounding many in an attempt to break one of their own out of jail. Four years later, he’s waiting for the last of the to be released from prison and the fulfillment of a promised bullet in his back. So when a pushy journalist arrives and wants him to relive the most horrendous day of his life, he isn’t exactly happy.
In order to prove she’s a good journalist and win a coveted position on her father’s newspaper, Ryleigh Steele plans to write an in-depth story about Sheriff MacDermott and how he stopped the most notorious gang in . There’s just one problem—the enigmatic sheriff won’t talk about it. Neither will anyone else … and Ryleigh soon discovers she’ll have to make a choice―the story or the Sheriff. She can’t have both. Or can she?
So that’s it. The third and final story. I’ll miss these MacDermott boys. They hold a special place in my heart.
Don’t you just love this cover?