Interview with Jennifer Taylor, author of ECHOES OF THE MOON and a Giveaway! 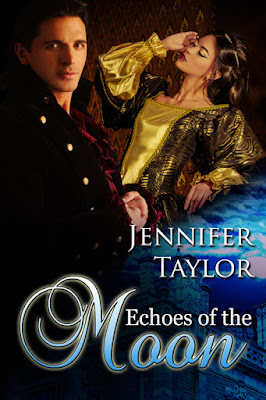 Today I’m interviewing historical Romance author, Jennifer Taylor, who is giving away a copy of the first in her series to one lucky commenter.

Lexi: What are you most excited about in this new release?
Jennifer: Thanks so much for having me, Lexi! Echoes of the Moon, book #3 of the Rhythm of the Moon historical romance series, features identical twins, Bethan and Elunid. Bethan is the caregiver for her sister Elunid, who suffers from mental illness. Bethan had resigned herself to living a life of duty and love without ever finding a mate, until she meets Henry. She finds herself drawn to him, despite his lowly occupation, and his courtly manners confuse and intrigue her as their attraction grows. At the heart of the story is the relationship between the twins, and the sacrifice that one must make for the other. There’s a lot of humor in the book, compliments of the antics of the townspeople and Henry and Bethan’s relationship. Music is a big part of my books, and I’m excited about the lyrics which I write on behalf of my characters.

Lexi: What made you chose your title?
Jennifer: My heroine in book #1, Mercy of the Moon, is Maggie Wilson, a midwife in an 18th Century port town. Her life is ruled by the cycles of the moon and her delivering mothers. She lives her life solely for the women of the town, and never imagined finding a man who would understand that—until she meets the enigmatic Ian Pierce. And as we recently witnessed with the latest eclipse, the moon has been a mysterious force since time began. Midwifery continues to be an integral part of the series with Echoes of the Moon.

Jennifer: I always start with the characters, usually my heroines first. I have a book journal, and I use it daily, and in that act of writing, the ideas begin to form. This prewriting is very crucial for me. I talk to myself, sometimes writing as the character. I talk to myself a lot! I don’t sit and think about the story, I think through the act of my fingers typing.  If I didn’t do that, the book would never come to fruition.

Once I get the hero and heroine fleshed out, I begin to plot. I use big pieces of butcher paper and sketch out plot ideas, drawing crazy spiderweb diagrams. I’m a global and visual learner, so this works well for me. It helps me think. Then the plot begins to form, but it changes quite a bit before the book is finished, because characters do unpredictable things and I let them. Those surprises are part of the joy of writing. I use the butcher paper a lot as the plot unfolds, sometimes with disastrous consequences, 😉 as I reveal later in the interview. Then I set to work in earnest, and generally write 6-10 hours a day, with breaks to pet my Great Dane, Bridget.

Lexi: What was the funniest thing you did wrong when you first started writing? 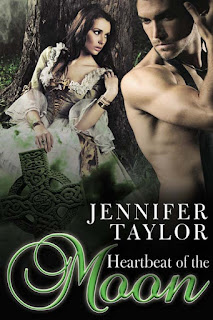 Jennifer:  So, regarding the butcher paper: during the writing of my second book, Heartbeat of the Moon, I had a scented candle lit, and several pieces of butcher paper on my desk that I was scribbling on as I was typing. I was so into writing a very passionate love scene, I didn’t notice I’d set my desk on fire. I put it out in an instant, knocking over my chair, and everything else on the desk. I like to say the love scene was so hot, it was on fire. Needless to say, now I keep my papers and candle far away from each other, just in case I get lost in a scene!

Lexi: What was the strangest thing that inspired a story for you?
Jennifer: I believe every good book should start in the middle of the action, with a big mess that the characters have to find their way out of. As I was dreaming up the plot for Book #1, Mercy of the Moon, I thought: what if my hero and heroine meet during the most tragic time in their lives? I happened to find a book called, Buried Alive: The Terrifying History of Our Most Primal Fear, by Jan Bondeson, and bingo! My hero and heroine meet over the grave of her sister. Later that night, she is returned, alive. Yes, she’d been buried alive and survived! As my hero and heroine, Maggie and Ian work together to save her life, they discover she’s greatly changed, and didn’t emerge from the grave alone. As they try to solve the mystery of who would do this horrible thing and why, their attraction grows. All three books are a mix of mystery, history, romance and supernatural, but always end with a happily ever after. 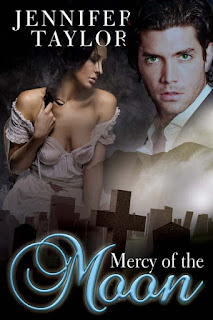 Lexi: Of all the books you’ve written, which is your favorite character?
Jennifer: I’d have to say my hero in book #1, Mercy of the Moon. Ian Pierce is an apothecary by trade, but a musician at heart, and sets to work wooing practical midwife, Maggie with his music and humor. He seeks to lighten her load and encourages her to care for herself,  and does whatever he can to relieve her burdens. He’s travelled the world searching for a cure for his affliction, which we now call bipolar disorder, and I so admire the bravery in his struggle to deal with it. And though he suffers from this disorder, he is still able to come to Maggie’s rescue when she needs it most. I have a weakness for musicians, and he sings a lot.

In my books, I enjoy finding love for unlikely heroes. There are many forms of heroism, and there is heroism in characters who struggle with a condition daily, and they deserve love too. Don’t we all deserve a chance at love?

Lexi: Absolutely! And everyone deserves a chance at winning your book, Mercy of the Moon. Be sure to leave a comment with contact information so you can be in the running to win!

Excerpt from Echoes of the Moon:

Through the buzzing in her ears, a voice called to her from far away, low and resonant. Strong arms cradled her, naked, and so warm. Her head lay against his chest, the hairs upon it tickling her ear. The muscles of his broad chest were hard and solid against her side, and so reassuring, rising and falling against her, encouraging her to suck in breath. But it was as if she sucked through a hollow reed.

“Bethan, you will be well soon. I’ll take care of you.”

He smelled of soap and earth. She clasped her arms tighter around his solid neck and closed her eyes. She’d not been held like this since childhood. He began to walk, carrying her as if she weighed no more than a kitten. Heat radiated from his chest, and his stomach Jennifer Taylor 56 muscles shifted and tensed as he headed toward the cottage.

She wheezed, then coughed.

She nodded, her cheek rubbing against his chest, the curls there soft, yet pleasantly rough. His heart beat a reassuring rhythm against the uneven frantic beat of her heart.

“Georgie has the same problem. I’ve some herbs will help you. George!” he yelled. “Is there water left in the pot?” 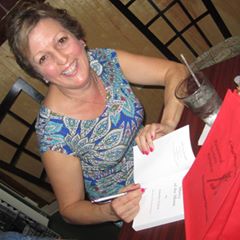 Jennifer Taylor spent her childhood running wild on an Idaho mountainside. Although she’s lived across the U.S., she’s still an Idahoan at heart and a notorious potato pusher. She has a degree in Human Services and has been a roofer, a computer data entry operator, a stay-at-home mom, and a professional singer and dancer. Music plays a big part in her historical romance series, and she can often be heard singing at her desk…unless she’s writing a midwifery scene, where screaming is more appropriate. Jennifer feverishly lobbies for the return of breeches and would love to see her husband of thirty-eight years in a pair. She lives in rural Florida with her husband and an entitled Great Dane.

Email ThisBlogThis!Share to TwitterShare to FacebookShare to Pinterest
Labels: author interview, Echoes of the Moon, Giveaway, Heartbeat of the Moon, Jennifer Taylor, Lexi Post, Mercy of the Moon