One Night in Havana
#34 in the City Nights Series from Tirgearr Publishing
by Kathleen Rowland
Kathleen will be awarding 3 lucky winners a $10 Amazon Gift Certiticate. Winners will be chosen randomly with Rafflecopter. Please use the Rafflecopter below to enter. Remember you may increase your chances of winning by visiting the other tour stops. You may find those locations here. About the Book: 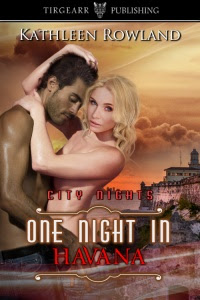 A desperate competition and sizzling attraction leads to dangerous desire. New York Marine biologist Veronica “Roni” Keane is attending the Havana Bay Conference in Cuba. Tomorrow only one grant will be awarded which will provide the winner with professional recognition, resources for a project, and living expenses for two years. She hopes to continue her deceased father’s work, but smooth operator, Carlos Montoya, has won many grants in the past. Carlos, a freelancer for the Havana Port Authority, works to help protect Havana’s reputation as a bastion of safety. As international travelers flock to the island, attracted by its 1950’s time-warp and colonial architecture, the drug business is running rampant, particularly on Roni’s cruise ship. Something’s not right, and when her scuba tanks are tampered with, Carlos brings in the military police to investigate. For her safety, he keeps her close, but he craves her body. Their attraction leads to a fun night with a bit of kink. But Roni finds herself in more trouble than she bargained for when the criminals blame her for alerting the military police and come looking for her. Can Roni trust Carlos to protect her? Will she stay in Havana if Carlos wins the coveted grant, or kiss her lover goodbye? An erotic romance with mystery.  Amazon Buy Link Excerpt: -- Chapter One 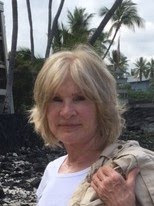 Book Buyers Best finalist Kathleen Rowland is devoted to giving her readers fast-paced, high-stakes suspense with an erotic love story sure to melt their hearts.  Her latest release is One Night in Havana, #34 in the City Nights series.
Kathleen also has a steamy romantic suspense series with Tirgearr Publishing, Deadly Alliance is followed by Unholy Alliance. Keep an icy drink handy while reading these sizzling stories.
Kathleen used to write computer programs but now writes novels.   She grew up in Iowa where she caught lightning bugs, ran barefoot, and raced her sailboat on Lake Okoboji.  Now she wears flip-flops and sails with her husband, Gerry, on Newport Harbor but wishes there were lightning bugs in California.
Kathleen exists happily with her witty CPA husband, Gerry, in their 70’s poolside retreat in Southern California where she adores time spent with visiting grandchildren, dogs, one bunny, and noisy neighbors.  While proud of their five children who’ve flown the coop, she appreciates the luxury of time to write.
If you’d enjoy news,  sign up for Kathleen’s newsletter at http://www.kathleenrowland.com/
Tirgearr Publishing - Leading The Pack
https://www.goodreads.com/author/show/786656.Kathleen_Rowland
http://www.amazon.com/Kathleen-Rowland/e/B007RYMF7S/ref=sr_tc_2_0?qid=1450835163&sr=1-2-ent
https://twitter.com/rowlandkathleen
https://kathleenrowland.wordpress.com/
http://www.kathleenrowland.blogspot.com
https://www.facebook.com/romanticsuspense.kathleenrowland/

a Rafflecopter giveaway
Posted by Lexi Post at 2:32 PM