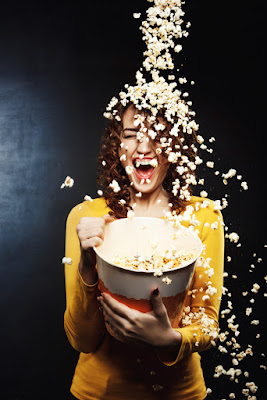 Hey gang, good to see ya’all again.  I’m afraid I have been woefully remiss in just flippin’ showing up.  LOL  It’s been a simple matter of life just ganging up on me.  Nothing big, just (as my friend Jan would say) sorta like being stoned to death with popcorn.  None of the pieces would inflict a lot of damage, but by the bucket load, they create one helluva mess in your life.

It all started with my mother, as most things these days do.  Now, before you think me callous or unloving, know that I LOVE my mother very much and I invest a lot of time taking very good care of her.  But I have been dealing with her for a looong time and have had to develop a very thick skin against her insane nonsense and the guilt she loves to dole out.  I have had to endure her showing up on stage in a tutu, doing skits that involve her rolling in flour on the floor and pulling dolls out from under her dress, and forcing me to interpret extremely dirty jokes to boys who came to pick me up for dates in high school.  My mother isn't your typical mother.  So no angry letters please...I don't need any more guilt!  This is all in fun.

Anyway, the story opens with a family reunion that was scheduled to take place at my home the first Sunday in March, and mom had an agenda.  So she started a week early lobbying for games.  Now, before you think, “Oh, how sweet,” you must know that my mother is deaf and lives in a world much different from the one most of us experience.  She has no filters, no concept of what is socially acceptable, and at 86, she also has no accountability.  And—to make things more challenging—her games have always been terribly inappropriate for mixed company and crowds that include children.  Remember the dirty jokes I mentioned earlier?

So, to get back to my story...I explain to my mother that there will be a lot of people there who haven’t seen each other in a long time and they will want to visit, not play games.  I also make it clear that I will be very busy with food prep and making sure everyone has everything they need.  With my hands full (literally) with being the hostess, I will not have time to be her interpreter (remember, she’s deaf) so that she can explain and manage games…because I will be the only person there who understands or speaks sign language.  I just can't do it all.

She pitches a little hissy fit and tries to claim she will not need an interpreter.  Really?  Maybe I forgot to tell you that this family is not truly hers—it’s actually my father’s family.  My father whom she divorced over 40 years ago.  Anyone in this family who might have known even the tiniest bit of sign language is long gone.  The ones who remain are cousins and distant cousins about my age and younger.  But since she is the only one from her generation living, they still enjoy seeing her at the reunions.  But it’s not her circus—these monkeys belong to my father.  So, I’m not going to allow her to drag out embarrassing games that will bury me in extra work and send mothers scurrying inside to keep their children from seeing things they simply shouldn’t. 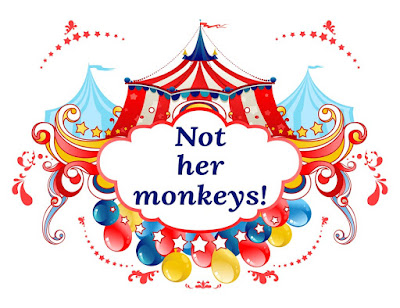 I stand my ground and say, “No games.”

Her hissy fit escalates, and she announces, “Then I’m not going because it will be boring.”

Deep breath.  Remember, not her monkeys.

I’m already on the hook to make a forty-mile round-trip drive to pick her up early morning (in the middle of food prep), then put everything on hold to make the forty-mile round-trip drive again to take her home (in the middle of an on-going family reunion) when she decides she is bored and wants to go home now.  The last thing I need is to have to juggle hostessing and chauffeuring with interpreting, and policing for appropriate activities!

So, my response to her announcement that she’s not going is, “Okay.”

Part of me shouts with joy that I’ve called her bluff.  Part of me is consumed with guilt, and part of me knows I’m right and is yelling at the other two parts, “Stand your ground.”  I wait for the fallout.

She is so stunned that I haven’t leapt to make it all about her that she just makes a face and lets it drop…for now.  Because I know this isn’t over.  Not by a long shot.

It’s about a week later that she comes at me again about the games.  I say, “No games.”  She pitches another hissy fit and launches into a tirade about how all of her games aren’t dirty.  Really?  I hadn't noticed.  She says she wants to play a clean game—something with water balloons. 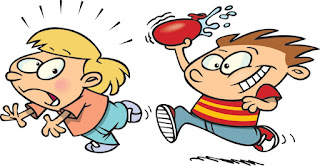 There is only one purpose for a water balloon!

I say, “No games. No water balloons.”

She starts waving her arms in the air wildly and shouting, “I didn’t say water balloons.  I said ping-pong balls.”

The signs for “water balloons” and for “ping-pong balls” are vastly different.  There is no way to confuse the two.  She started out with, “water balloons,” and was now fishing for something she could sell.  But we all know as soon as I say yes, the water balloon issue will rear its tremendously ugly head again.

I stand firm, so she pulls out her old standby, “Then I’m not going because it will be boring.”

At this point, the reunion is the next day and I’m not scheduled to be back at her house for another week.  She’s run out of options.  The only tactics left in her arsenal are to:  1) concede defeat, go, and have fun anyway, even though it’s not all about her, or 2) to stay the course, avoid the boring family reunion, and dish out a pile of guilt deep enough to drown a giraffe the next time she sees me.

Remember, I’ve been dealing with this woman a loooong time…I know the routine.

The hissy fit holds, she stays home, I make her excuses for her, and the following Wednesday, we are in the grocery store when she asks, “So, how was the family reunion?”

Translation:  Did everyone miss me?  How horrible was it without me?  And are you guilt-ridden enough now to allow me to play games with water balloons next time?

I refuse to be baited.  I smile and say, “Everyone asked about you and said to say Hi.”

She frowns.  “Did you tell them why I wasn’t there?”

I smile and say, “Of course.  I told them you didn’t feel well.  They said they all missed you and hope you feel better soon.”

She scowls, and I push my cart down the aisle, refusing to open the door to the pile of guilt she has stacked behind it, just waiting for me to unwittingly turn the knob.  Nothing more is said after that. 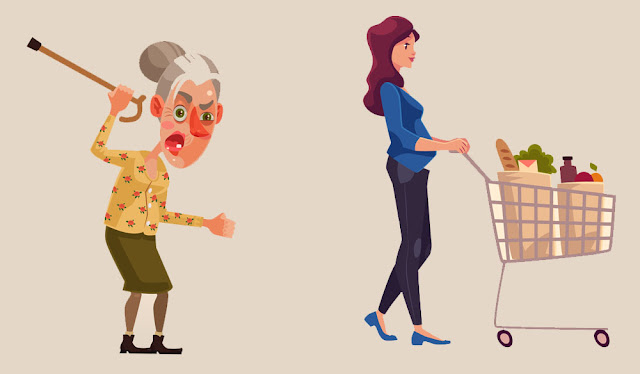 I’ll let ya know next year if she opts to leave the games at home and show up.  I sincerely hope she does because I know she would enjoy it—even without the games and water balloons.

Also, during the month of March, I had out-of-town company come in from two different states and we raised the drop-ceiling in my kitchen.  So, my four-bedroom home was so filled to the rafters with people, that my two grandsons were staying in the RV parked in the driveway, we had a torn up kitchen with insulation everywhere and the coffee pots and microwave set up on the patio, my mother pitching fits, and a family reunion the day after we got the new drywall hung in the kitchen.

Perhaps my mother would have fared better with her nonsense at a different moment in time.

This story is destined to become a "family legend"...the year my 86-year-old mother refused to come to the family reunion because she couldn't play with water balloons.

We all have them.  What's yours?