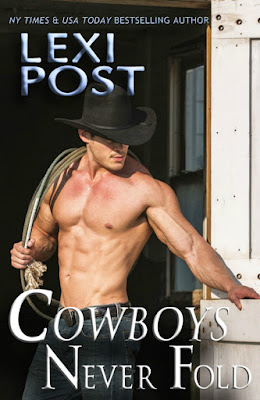 I'm excited to let you know that this first book in my Poker Flat series is now FREE on all retailers! There are 4 other books in this series after this one and a spin-off series (Last Chance) from the second book in the series just in case you fall in love with my cowboys. Just sayin’ 😊
I hope you enjoy!

Wade Johnson always pays his debts, even when it means working three months at a nudist resort for his best friend. Even when he’d rather be thrown from an angry bull… something he’s more familiar with. Now he has to discover why the last three stable mangers quit the resort while trying to keep his hands off the smart, sexy, unreadable owner. But even as his body and heart become more involved, new “unfortunate events” occur to threaten the enterprise.

When her childhood neighbors and surrogate parents were thrown out of the trailer park for being nudists, Kendra “Night Owl” Lowe swore that one day she’d build the best nudist resort ever. After her career as a professional poker player pays her back in spades, she can finally fulfill her vow. There will be resistance, but she’s determined to make Poker Flat successful, even if it means relying on her own two hands and a few misfit employees. All bets are off, however, when Wade arrives and her attention wanders to his broad shoulders, six-pack abs, and polite ways.  But she’s his boss. Giving in to temptation could mean jeopardizing her operation, and she won’t do that for anyone.

As Wade draws closer to learning the truth, his own truth is revealed. He realizes Kendra will do everything she can to make her resort a success, which could include letting him go. To win her heart and save her dream, he will have to go all-in and that could mean baring more than his soul.