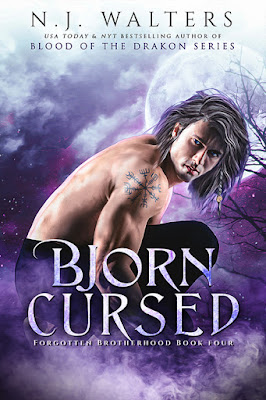 Lucifer is up to his old tricks, causing problems for the Forgotten Brotherhood. This time, he’s had a woman removed from the Norse afterlife and placed her right in the path of Bjorn Knutson. After the slaughter of his wife and family centuries ago, tortured and broken, Bjorn was cursed as the first Norse werewolf. Now he’s been tasked by Odin himself with killing the woman who escaped. Failure is not an option.

Before he can track her, he stumbles across a woman being accosted by three men in the middle of the night. Even though she’s human, he intervenes and is shocked to recognize the face of the one woman he could never kill — his wife Anja.

She’s also the one he’s hunting…and if he doesn’t kill her then both their lives are at stake.

With the tattoos flowing over his face and body, he was like something out of a nightmare rather than anyone’s idea of the perfect lover. He’d always been a warrior, more at home on a battlefield than trying to broker peace talks. Now he was even deadlier. People feared him—humans and paranormals alike. Only she’d ever looked at him with love.

N.J. Walters is a New York Times and USA Today bestselling author who has always been a voracious reader, and now she spends her days writing novels of her own. Vampires, werewolves, dragons, time-travelers, seductive handymen, and next-door neighbors with smoldering good looks—all vie for her attention. It’s a tough life, but someone’s got to live it.