Not truly about the devil, but rather let's decide which hot hunk, Spence, Dylan, or Hawke will win the independent journalist's interest.  Kate wonders how she gets so lucky to be the center of so many men's attention.  Yet, she has a murder to solve before anybody gets in her pants. 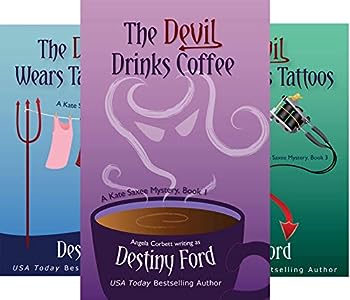 After a breakup, Kate takes her career back home to Branson Falls, Utah.  Kate doesn't follow the Mormon practices, and she does drink coffee which is secretly called "hot chocolate" as a cover.  The local gossip tree, The Ladies, has it in for her from the start.  But Kate doesn't care because Spence hires her at his newspaper.  He's charming, good-looking, and easy to work with.  Is he the one?

Chelsea Bradford is found floating in Emerald Lake, and Kate can't believe the police are correct in labeling it an accidental drowning.  One thing Kate learned while away at college is that "boob manipulations" can go a long way with convincing men to do what she wants.

Hawke, a mysterious PI, gloms onto Kate immediately.  He wants to be partners in solving this alleged crime.  The locals don't know much about him, probably because the most notable thing is his tight ass and omnipotent presence.  Will she get extra close to Hawke?

And the player comes out to play.  Dylan, local politician, claims Kate as his girlfriend because he wants to find out more about Chelsea's death.  Maybe he's settled down and wants to get serious.

It's a fun story, letting the crime get in the way of wandering eyes and hands.  Not knowing which man really gets Kate's attention in all the right ways is a mystery in itself.