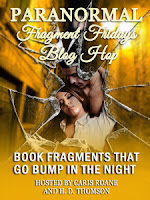 Welcome to the first week of Paranormal Fragment Fridays Blog Hop! This will be a month long. Each stop on the blog hop will have an author posting a "fragment" of his or her paranormal work on Fridays and Happily Ever After Thoughts is featuring its paranormal authors. 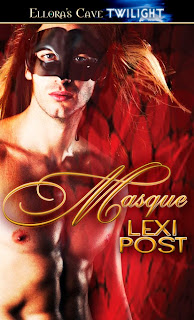 Rena shivered at the sly grin on Eric’s face long before he reached toward her, but Synn’s reactions were far quicker than hers. He grasped Eric’s wrist and from the look on the ghost’s face, Synn’s grip wasn’t comfortable.

Eric’s sneer reminded Rena of a clown in a horror movie she once watched.

“What are you going to do, Synn? Kill me?” He laughed, the scratchiness of the sound irritating her nerves.

Synn dropped Eric’s hand. “There are fates worse than death, and I do have friends in high places.”

Eric snorted as he rubbed at his wrist. “I don’t think the great prince will be of much help. He’s sunk to depths even I can’t reach, though I do try.”

Synn pulled her back against his chest. “I believe you were just leaving, never to return.”

“And yet, never going far either.” Eric’s raspy chuckle as he left reminded Rena of a man who’d had his larynx removed. She shivered in response.

Synn pulled her into his arms. “He won’t come in here again.”

She nodded against his hard, naked chest, but she wasn’t sure she believed it. Eric’s attitude told her he wasn’t through with her yet, and she wouldn’t like whatever he cooked up.

Synn lifted her head from his chest. “Would you like me to stay with you tonight?”

Her heart tripped at the idea of lying next to his magnificent body and falling asleep. That would be heaven. Or maybe better yet, they could make love in her bed and—

“Rena. If I stay with you, it will only be to sleep. Otherwise, I should leave.”

Her disappointment must have shown because he smiled knowingly at her. But the truth was, at least tonight, she’d feel safer if he was with her. “Please stay.”

Be sure to check out the other fragments on the blog hop!
Posted by Lexi Post at 11:30 PM