So, whose story is this, anyway?

Okay, so Kayce got caught again with nothing to blog about and she cast about for something…anything that might be fun to talk about—maybe something writing-related this time?  Now there’s a new concept for a writer.  DUH!  Then she got distracted with the Awkward Family Photos site and wasted a bunch of time looking at…well, awkward photos.  If you’ve never cruised that site, you should some time…it will make your family look normal.  Didn’t do it for mine…but it might for yours.  LOL


That got me to thinking about writing and about stories and about how many stories there are out there.  How many stories are there, anyway?  Is there a limit?  When will we run out?  Is there only one way to tell a story?  And if there is only one right story for any situation, who’s the right person to tell the story?  These are all things that writers wonder about, things that keep us awake at night, things that make our lunch sit like a rock on our stomachs when we hit that proverbial wall.  So…what is the right answer?


That got me to thinking about my very first attempt at writing seriously (i.e., not a school assignment).  I’d picked up a library book…and don’t ask me which one…I’ve long since forgotten.  But the subject of the book was something along the lines of learning how to write and it had a very interesting experiment in it that I thought you all might be interested in.


So after an hour or so of head shaking and chuckling over the unfortunate pictures other families are still trying to live down, I decided to borrow a couple of those photos and try a new twist.  I call this the “What’s Really Happening Here?” game.  So I ran a few of my favorite awkward photos by my grandsons to see what they thought might really be happening in the picture.  What I got were some pretty good captions for these pics—captions that showed me there could be many different perspectives on the same picture.  As you read these captions, think about what kinds of things run through your head…what would your caption be? 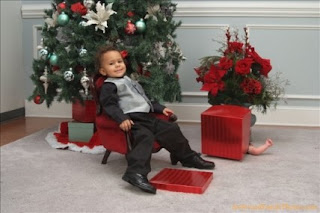 Can you see how any one of those would work?  How one picture can have many different meanings?  Did you come up with some new ones?  Of course you did…I know your twisted little minds!


So, after capturing those little gems, I decided to take the experiment another step further and see if a picture could provide not only multiple captions or situations, but different unrelated stories…entire stories.


Remember that little exercise I mentioned above that was my first attempt at writing?  Well, the assignment was to watch five minutes of a television show with the sound turned off.  Then you write the scene, complete with whatever dialogue, action, and description you imagined was happening in that segment of the show.  It was my first attempt at writing a love scene which, by the way, will never see the light of day.  But it was a great way for me to learn how to develop a scene and I figure if it works with a TV show, it should work with a picture too.  Why not?


So…queue the next awkward photo and let’s see what kind of story lines we get. 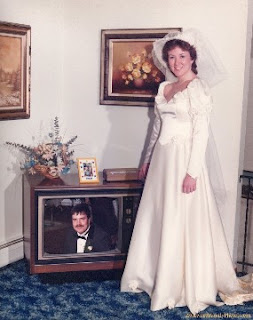 Option one:  This woman is a serial murderer.  She kills brides and keeps the wedding dresses hidden in a secret compartment in the false wall of her walk-in closet.  But now she’s found the man she wants.  He’s a smokin’ hot game show host and with the money he makes doing television, she’s sure she’s finally found the man who can keep her in the style to which she’s become accustomed.  After all, it’s not every household that can afford a console TV and blue carpet.  What?  You don’t think you’d buy that book?  Really?  Well, I guess every book isn’t for everyone.  Maybe there’s another story (and another book) in this picture that works for you.


Option Two:  Perhaps this woman has a dreaded disease but these two love each other madly so the wedding has to take place long distance because her house is enclosed in a bubble.  If she goes outside, she dies.  No?  Yeah, you’re right…can’t put any sex in that story…well, not the hands-on kind anyway.  : - )  And that's a whole different story.


Option Three:  This was a failed prototype for a TV show that was the forerunner to internet dating.  But the prototype was thrown out because no one could believe anyone would consider dating someone they’d never met.  It’s a hit, right?  No?  Alright…back to the drawing board.


Option Four:  The groom was a stinking cheapskate and wouldn’t spring for the cost of plane fare to actually be there for the wedding, so he convinced his co-dependent fiancée to do it remote.  Yah, I thought so…that one worked for you, didn’t it?  Don’t lie now!  Okay, then I’m gonna pull out the big guns.  This next one was my 14 year old grandson’s interpretation of what was going on in this picture.  You ready for it?  Huh?   Wait for it…it’s pretty good.  Here it is…


Option Five:  Switch channels for a new husband.  Yep, I knew it…that one did it for all the women reading this article.  : - )  Easy peasy.  He gets lazy, he cheats, he lies, he leaves the toilet seat up…a couple of batteries, a good remote, and life’s good again.  Yeah, baby!
Okay, are you getting the point here?  Are you getting that there is no limit to the number of stories out there?  That there are many different ways to tell the same story, even if you think it’s already been told before.  There can be many very different stories coming from different perspectives but all originating from the same picture or core concept.  All it takes is stepping outside the box and looking at the same old picture from a new perspective or through the eyes of someone new.


So…let’s try this one more time…because I just love this next picture and I have to give this one a shot. 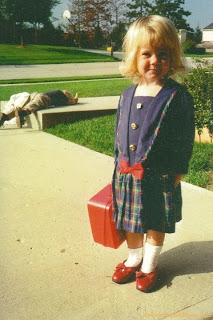 Option One:  The FBI is hiring operatives younger these days; easier to train and they work cheap.  But, clearly, some are better than others.  (Notice, it’s the girl that’s still standing.)


Option Two:  Never piss off a woman with pretty new red shoes and a weapon in her hand.  It will NOT end well for you!


Option Three:  She has told him and told him to watch where he’s walking, but he just didn’t see that concrete step.  Well, you can’t protect a man from himself.  Sometimes all you can do is just let him make his own mistakes and then put on a smile and go on.


Option Four:  It was a very late night for the midget in the background.  Wait…is that a banana by his head?  Oh, what we could do with that!  No wonder she clobbered him with the lunchbox.


So, what have we learned?  Stories come in all shapes and sizes, from many different sources, or all from one source.  There is no limit, there is no right perspective, there is no right person to tell the story.  Change the perspective, change the storyteller, and you change the story itself.  So if you ever find yourself stuck for a solution or in need of a new story, just step to the side and put on a different hat.  Look at the story through the eyes of a different person or a different character.  I guarantee you a colonoscopy scene looks a whole lot different from the perspective of the person in the gown that opens in the back than it does to the person at the other end of the scope!  Which story do you tell?  Which solution do you choose?  It doesn’t matter.  Because not every story is for everyone, but there is someone for every story.


So go write your story, go tell it however you want, through whatever lens works for you.  I guarantee you that somewhere there is a pretty blonde with cute new red shoes and a fun new weapon that really loves that last picture.   So what if the guy with the banana doesn’t like it?  He’ll have his own story one day…as long as he doesn’t keep pissing off the girl in the red shoes. 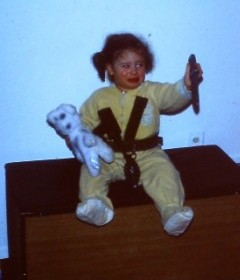 So…your turn to tell the story.  Here’s your challenge…here’s your sign…er, I mean picture.  Now, notice that the little girl has a knife in her hand, a grenade strapped to her waist, what looks like ammunition magazines tucked in her belt, and a bunny clutched in her other hand as she cries.
What’s the story here?  You got one?  I do…I’m wondering where her big brother is.  : - )
That’s my story, crazy and cockeyed, and I’m stickin’ to it.  Hang on tight now ‘cuz we’re gonna go real, real fast!

My thanks to the Awkward Family Photos site for sharing these pics with us.  Go check them out!
http://awkwardfamilyphotos.com
Posted by Kayce Lassiter at 3:00 AM