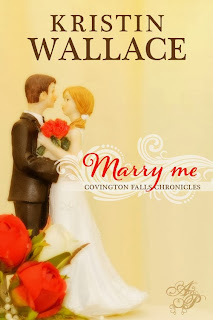 The Man Who Started It All

A common question authors get is… do you think of a character or situation first? For me I think it’s a combination of both. In the case of MARRY ME, it wasn’t so much the heroine who dictated the story, but the hero, Seth Graham. My original idea with the heroine was a cynical woman who doesn’t believe in “happily ever after” – someone who describes herself as “allergic” to weddings – who has to take over running a wedding planning business. I just thought the idea was funny. I didn’t know “who” she was at first or why she’d have to run a wedding planning business. It wasn’t until I found the character of Seth that I was able to answer those questions.

As I thought about who the love interest was, I knew it would have to be someone she would run into a lot as she’s planning these weddings. Then I finally came up with a minister. That single thought brought the story together almost instantly. Seth Graham helped me determine what the book was really going to be about. I was able to answer the question of why my heroine was so cynical about love and marriage. (She grew up with parents who married and divorced multiple times so she learned not to trust in love.) I knew why she would be compelled to run a wedding business. (A former stepsister owns the business and she’s having a pregnancy crisis.)  I also developed an entire fictional town, Covington. Finding Seth also took the book in an entirely new direction. It became an inspirational romance, which wasn’t what I set out to write. I was able to add a faith journey for this cynical woman who didn’t believe in anything outside of herself.

With Seth I was also able to create a character who had a strong faith, but who was also very human and suffered the same doubts as anyone else. I was able to show a “religious” person in a positive light. Whenever a religious character is portrayed on TV or in movies, he or she is invariably a nasty piece of work. If it’s a minister, the stereotype can be even worse. He’ll be cold and unfeeling or an outright, sadistic monster. Seth is none of those things. He’s a guy who lost his wife, and he’s just trying to figure out how to live with that. He also carries the burden of leading his church congregation, and he feels the weight of that responsibility heavily. He’s also doing it alone. His wife helped ease the burden, but now she’s gone. There is no one he can talk to about his problems. Until he meets Julia. Her innate cynicism about people and their motivations allows her to understand what Seth is going through. While outwardly, Julia and Seth would seem incompatible, they are actually great compliments to each other. Seth is able to make Julia see a different type of love that’s even more powerful than a romantic one.  And he shows her how faith can help her forgive her parents and heal from her past so she can be free to build a life that will make her happy.

So whenever anyone asks me what it inspired this book, I’m able to blame it all on a man…Seth Graham.

I hope you enjoy getting to know him.

(Excerpt: Lead up to Julia and Seth’s first kiss)
Seth gave a frustrated groan.
“What now?” Julia asked.
“You are a dangerous lady.”
“Me?”
“God, she doesn’t even see it!” he called out to the heavens.
“Are you praying?” she asked in bemusement.
“For strength. You tempt me, and it’s making me crazy.”
“Are you talking about the other night in the kitchen?”
“It goes way beyond last night,” he said, hands gripping the railing. “Did you know I had a wild crush on you when you used to live here?”
Julia’s mouth dropped open. “What?”
“I helped you build a fort.”
“You pounded nails so you could be near me?” she asked, batting her eyelashes at him. “What a way to court a girl.”
“It wasn’t like I could talk to you,” Seth said, shuffling his feet. “Not without sounding like an idiot.”
“I didn’t think you even liked me.”
A dry chuckle escaped from his chest. “Like and lust are two different things. You were every teenage boy’s fantasy. Everything about you fascinated me. The way you walked, the way you tossed your hair, even the way you smelled. It drove me nuts for two years.”
“I was your fantasy?”
“The problem is now you’re back, standing there looking like some kind of screen goddess, and you get me like no one ever has,” he said, as if she hadn’t spoken.
Her skin started tingling. “You think I’m beautiful?”
“You’re so much more than beautiful.”
Jumping him right now would be bad… Right? “This is a little complicated.”
“You think?” he asked, drifting closer. “You’re a guest in Grace’s house and living about a hundred feet away. Plus, I am a minister, and it wouldn’t look good if I grabbed you right now and kissed you senseless.”
“Not in the job description?”
“Definitely not.”

Growing up Kristin devoured books like bags of Dove Dark Chocolate. Her first Golden Book led to Laura Ingalls Wilder, Nancy Drew, Encyclopedia Brown, C.S. Lewis and the Sweet Valley High series. Later, she discovered romance novels and fell in love all over again. It’s no surprise then that Kristin would one day try her hand at writing them. She writes inspirational romance and women’s fiction filled with love, laughter and a leap of faith. When she’s not writing her next novel, Kristin works as an advertising copywriter. Over the 15-year career in the ad industry, she has worked on clients that have included the Miami Marlins, Discovery Networks, Radisson Seven Seas Cruises, The Peabody Hotel and Sea World. She also enjoys singing in the church choir and worship team and playing flute in a community orchestra.