KC Klein with a Giveaway of Hustlin' Texas! 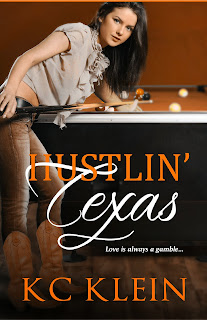 When Characters Don’t Do As They're Told.

I’ve learned a lot about myself while writing. One of the big lessons, and possibly the hardest, is that I am not in control. As an author this lesson is pretty much drilled into you from the beginning.

Once you’ve signed over your baby to a publisher you’ve pretty much given up any semblance of control.

Title control: You’re crazy. (Though, I’ve been fortunate to title all my books, I don’t expect that trend to continue.)

Editorial control: Pick your battles.
But the one thing I thought I had a handle on, the one creative piece that really truly was my own, was just another thing I didn’t have control over—“The Story”.
When I first started to write there was a heady power in making these characters do what I wanted. Act a certain way. Do certain things. I believed and quoted my mother often. “I brought you into this world, and I can take you out.”

Fast forward to my third book. I started writing Hustlin’ Texas years before it was published. It was one of those books that just dragged on and on. It felt as if each chapter was a hardship. Some books are just like that. Nikki, the heroine in Hustlin’ Texas, was clear to me. Her voice rang very true. I totally got the smart aleck-screw-you attitude that she wore like a super hero’s cape. (There’s a possibility that her character hits a little too close to home.)

The problem came in the form of feedback from my then agent and crit partner. Nikki was too harsh. She wasn’t likable. The self-depreciating humor was a turn off. How could anyone relate to her?

The suggestion was to go back and make her more likable.

Great. Good suggestion. I am all about what I need to do to make my story better. As my good friend, Erin Kellison, says “There is no ego in publishing.”

She’s right. So I went back to “fix” what was wrong. The problem was Nikki kept coming out the same way. More smart-mouth. More attitude. And way more issues. I started the beginning of Hustlin’ Texas over three times with no better results. I finally put the book aside and admitted to myself that I couldn’t write a contemporary romance. A few months later my agent called and asked me where the story was.

Umm…ahhh…not finished. I had stopped writing because I feared that I didn’t know how to write what the contemporary romance market wanted. My then agent wasn’t impressed.
Between there and here there were some long twisting events that eventually led me to submit Hustlin’ Texas to my editor with Nikki in all her original glory.

The fact was the more I tried to change, or lead, the story a certain way the worse the story got. The conflict got lost, and I got bored. As I write this I wish I could say I’ve learned my lesson. That I learned to stop trying to force things and got out of my own way.
Um…I haven’t.

The next book in the series has officially taken the cake as the hardest book to write. I got mired in the same problem. I listened to others opinions about the story before I had it firmly in my head. I tried to change the story, control it, but as we all know that doesn’t work.
I think the biggest lesson is we aren’t in control. Sometimes we have to trust the process. Sometimes, ok for me most of the time, I’ve got to let go. There’s something about the charged energy a writer gets when they stop creating and just start being the vehicle that gives the story life.

I found I like the thought of control more than I’d realized, but I like a finished manuscript even better.

I hope you like Jett and Nikki’s story. I like to blame my first gray hair on Hustlin’ Texas, but for my readers I just hope they have a few enjoyable hours.

Thanks for letting me stop by, and please leave a comment to enter to win an e-copy of Hustlin’ Texas.

Jett nodded, then glanced around the crowded bar. When he turned his gaze back on her, a person would be hard pressed to describe his eyes as anything sweet or candy like. “I was hoping you’d be up for a little game of nine-ball.”
Nikki took a sip from her beer and raised her brow in question. Nine-ball was the hustler’s game. It was short and quick, without all the rules of straight pool.
He nodded his head toward the tables in the back. “I heard you played.”
“Then you heard wrong.” She took another sip, eying him the whole time. “I’ve given it up for Lent.”
The corner of his mouth hinted at a smile. “Found God, have you?”
“Among other things.”
Jett glanced to the tables, then back to her. “One game. No money.”
Nikki shook her head. “I don’t play for fun. No thrill in it.”
He swallowed, and she could see his jaw work. “Then we’ll play for a favor. A debt. You up for a little more red in your ledger?”
She didn’t want to ask, not really, but gambling was too deep in her blood not to hear the stakes. “What’s the favor?”
He smiled, not the golden boy smile she’d come to know, but instead one that lacked any charm at all. “Well, Texas, that’s the thrill part. You don’t know until the end. Anything goes. No boundaries.”
Her heart did a funky jump-start in her chest at the possibilities, but her game face was ice-cold.     “No limits?”
“None. Unless that’s too much heat for you? We could place some ground rules if you want to play it safe.”
Nikki knew what Jett was doing. It was so obvious, and yet, there was that achingly familiar thrill that zipped up her spine and buzzed in her blood. Some families were predisposed toward red hair or near-sightedness. The Logans were addicts. Throw a dart at the family tree and you’d hit a vice—drinking, smoking, shopping. You name it, and the Logans could turn anything into a compulsion. But really, under all the addictions, there was only one. One vice that was as indicative of a Logan as dark hair, brown skin, and blue eyes.
It was very basic, really. The Logans were gamblers.
There were stories as far back as her grandfather, if stories in the Logan family could be believed, who won his first car—a 1950 Cadillac—on the toss of a coin. Then there was her father, Dakota, who’d bet on every sports game invented, and even ones that hadn’t, like golf without clubs. Her father had once bet a hundred dollars on his ability to throw a golf ball through the eighteen holes. Legend had it, he’d won that hundred, but lost the money in the same night in an “I can piss into a can from the second story” contest.
So Jett knew what he was doing. And Nikki was smart enough to know this was more than a simple favor and way more than a simple game of pool. She also knew something else. Jett was no match for her in this game.
She hid her smile with a sip of her drink. The thrill of a “sure thing” was headier than any shot of tequila, more exciting than a leather-jacketed man on a motorcycle.
“Oh, I can take the heat,” she said.
“But can you handle this much heat?”
“Oh, I can handle it. Because we both know I can beat you with one hand tied behind my back and blindfolded.”
His eyebrows arched. “Then you’d best start figuring out what your favor will be.”
Nikki put down her bottle, no longer needing the buzz. “Already have.” Her car fixed…for starters. “You really think you can beat me at pool?”
God, he was so cocky. It was almost tragic.
His eyes narrowed and there was absolutely no humor in his voice when he spoke. “Oh, I’m betting on it.”
Buy links for Hustlin’ Texas:
Amazon: http://kckleinbooks.com/HustlinTexas
Barns and Nobel: http://kckleinbooks.com/BNHustlinTexas
Kobo: http://store.kobobooks.com/en-US/ebook/hustlin-texas 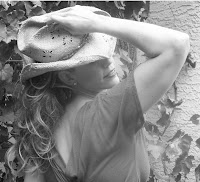 KC Klein has lived most of her life with her head in the clouds and her nose buried in a book. She did stop reading long enough to make a home with a real life hero, her husband, for over sixteen years. A mother of two children, she spends her time slaying dragons, saving princesses, and championing the belief in the happily-ever-after. Her debut novel, Dark Future, is a finalist in the 2012 Prism contest and has been honored with a reviewer’s choice award. Her other titles include a sci- fi, 2012 RONE award winning romance anthology, Hotter on the Edge, and the first two books in her Texas Fever contemporary romance series, Texas Wide Open, and Hustlin’ Texas. KC loves to hear from readers and can be found desperately pounding away on her laptop in yoga pants and leopard slippers or more conveniently at www.kckleinbooks.com.

And don’t forget to leave a comment for a chance to win Hustlin’ Texas.