Release Day of MASQUE in Print with Giveaway from Lexi Post! 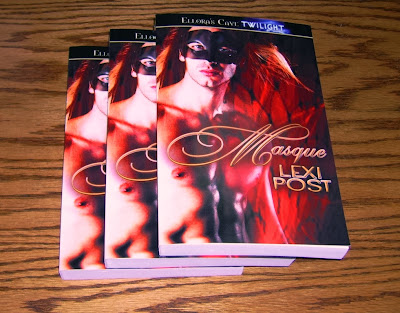 Here’s the blurb for MASQUE.
Rena Mills plans to turn an abandoned abbey into a haunted bed-and-breakfast to prove she can be successful without her ex-fiancé. What she finds inside is Synn MacAllistair, the distinguished, self-proclaimed Ghost Keeper. Her dreams soon fill with sexual cravings for him. But are they dreams?

Synn, born in 1828, is determined to free the souls of the resident spirits, blaming himself for bringing the Red Death that killed them. When Rena steps into the old Pleasure Palace, he’s sure he can take her through the after-midnight Pleasure Rooms and stoke her passion to complete the Masque so the souls can cross over. Her innocent fire makes him crave more, but it’s far too late for him.

The print version came out to be 336 pages. Wow. Luckily, it is good size print type and the paper back is large for easy reading. So if you weren’t sure what to do with that gift card you received for Christmas… ;-)

Here’s a never before revealed excerpt from MASQUE.
Synn stepped into the chapel at the back of the Abbey. The small, intimate structure he’d designed had two stained glass windows at either end with tall, clear windows lining the walls. As he sat in a random pew, he admired the rose tint on the white marble altar as the sun shone through the red glass of the robes of St. Anthony. Unable to resist, he glanced above him at the painting of the Archangel Raphael on the ceiling. That particular image bothered him, not because the face was set in disapproval, but because wherever he was in the chapel, the angel disapproved of him personally. Once again, it looked down on him.

He had never been a religious person, but the chapel itself and Father Richard were old friends…that is when Father Richard decided to appear. Synn hadn’t discovered yet why the good father graced him with his presence some times and not others, but he certainly didn’t mind the company. Unlike other priests of his time, this father was well aware of the human condition and did not expect perfection from mere mortals.

“Father Richard?” Synn paused. The good father wasn’t a ghost like the others and yet he was. He had appeared after Synn finished the graves and had blessed them all. “Father Richard, are you here?” He waited, his fingers drumming on the pew in front of him. Maybe an enticing tidbit would bring the father out of hiding. “Father Richard. I don’t know if you are aware, but we have guests. Two lovely ladies from this century are now living in the Abbey.”

He waited, smelling the air. Father Richard had a very particular frankincense scent. Synn leaned back against the pew. The father must already know of their guests. “No men have come with them, so I think I will take the dark-haired lady, Rena, through the Pleasure Rooms.”

Synn grinned. He couldn’t see the father yet, but incense tickled his nose. “I have no choice. No men arrived with them.”

Father Richard appeared as he strode purposefully up the aisle toward him. “My son. Enticing a young woman to sin is not going to expiate the sins of all here. Two wrongs do not make a right.”

Synn raised his brow as Father Richard stopped at the pew in front of him, short of breath. The father was thin and wiry; therefore, he must have come from far away to be so winded.
The man sat at the end of the pew across from Synn. “Tell me you are not seriously contemplating this.”

“But I am.” He faced the father, his elbows on his knees. “I believe by having the woman complete the circuit for the rest of the guests who did not, I may be able to fulfill the desires that were interrupted when I arrived.”

The priest hesitated. “But everyone here has been able to finish their Pleasure Rooms and yet they remain. Why do you think taking this woman through will change their status?”

Synn reviewed his logic before answering. He didn’t want to win a debate, he wanted the father to agree it could be the answer, or propose a better one. “I believe the problem is our people are not alive. Yes, they later completed the rooms they had hoped to that night, but they were already dead. However, the prince never finished and he did cross over. I think if I can persuade a live person to complete each room, the clock will start working again and the spirits will be allowed to cross.”

He watched his elusive friend for signs of agreement. He’d read every book in the library and developed theory after theory for freeing the spirits trapped in the Abbey. He’d tested a number of those theories, but none had ended in success.

Father Richard looked heavenward and crossed himself. “You realize if you are right, there is no surety you will be free as well. You are different.”

A cold chill swept through Synn’s body as he nodded. He was different. He was a killer. He deserved to be trapped in the Abbey for eternity.

The priest’s hand on his shoulder jerked him from his morbid thoughts as comfort seeped beneath his skin.

“My son, you deserve to be freed. You must stop blaming yourself for their deaths. How many times must I tell you, it wasn’t supposed to be this way? Something evil interfered with His plan.”

Synn stood, dislodging the priest’s hand and the peace he provided. Father Richard was wrong. He was to blame, and he must free the spirits of the Abbey. “But do you think it could work? Does it make sense?”

“I don’t know.” Father Richard sighed. “It goes against what I believe, and yet, if someone tainted the original events, this does make logical sense. But I will tell you, I’m not happy about it.”

Synn smirked. “You can always watch.”

Father Richard crossed himself again as he rose, but his lips quirked. “Stop teasing this old man. I can still take you down if I want.” 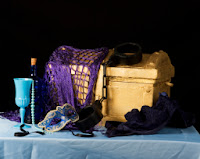 “Only if I let you.” Synn winked. “Now, I just need to persuade this exciting woman to experience each room in order. Not an easy task, I assure you.”

“You only have six left. That’s a start.”

“Father! You did watch.” Synn stared hard, not quite believing the man he respected had given in to the sin of the Abbey.

The father grabbed his ear and pulled hard. “No, you wicked man, I heard Eve and Jonathan talking about it in the vestry. I should take a swing at that pretty face of yours for your lack of faith, but you will need it to entice the lady of the Abbey.”

Synn pulled away despite the pain it caused. “I apologize for having such disrespectful thoughts. But you’re right, I do still need to convince her to fulfill every room. I hope you will pray for my success.”

Father Richard harrumphed before turning away. “For the sake of your soul and those trapped here, I will pray for your success.” The priest strolled down the aisle, disappearing as quickly as he’d come.

Synn walked through the pews and stopped before a side window. There had never been a plan for a graveyard. In fact, it had been a garden when he’d designed the Abbey, but he’d needed the stone of the garden walls to make the headstones for those he’d buried. Like a magnet to metal, his gaze shifted to two headstones in particular. Those were the resting places of Eve and Jonathan, the young couple who were so in love, and at the time, just beginning their journey as man and wife, except they weren’t resting…yet. His hands fisted as he ground his teeth in frustration.

He would free them. If this plan didn’t work, he’d try another and another, and he wouldn’t stop trying until he found a way to release every soul.

I will give away one personally signed copy of MASQUE in print. Enter the Rafflecopter or leave a comment about what was your favorite part of Christmas this year and you may win!