Interview with Marie Patrick and a Giveaway 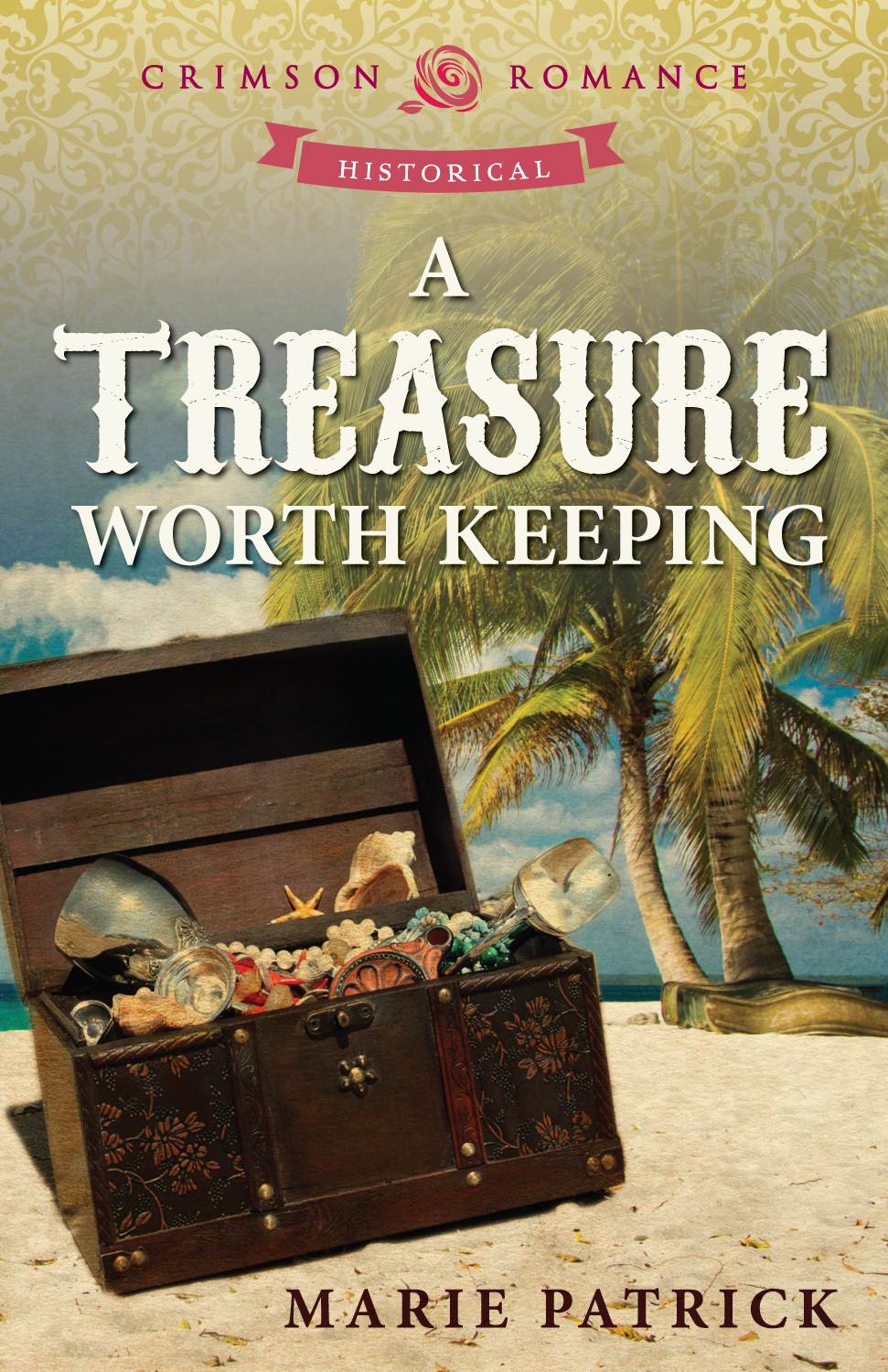 Alexis: Today we have Historical Romance author and fellow Happily Ever After Thoughts blogger, Marie Patrick who has just released A Treasure Worth Keeping.

So Marie, what has been the best piece of advice you ever received for your writing career?


Marie: The best advice? Never give up. Ever.

Alexis: What was the funniest thing you did wrong when you first started writing?

Marie:  Oh my gosh….the biggest thing I did wrong as a new writer was head hop…not sure if that’s the funniest, but yeah, it was the biggest. I was quite talented though….I could head hop three times in one sentence! I don’t do that anymore….at least I don’t think I do!

Alexis: No, you don't. I checked :-) Do your pets help with your writing or distract?

Marie: Both! I have two dogs…rather big dogs…..for the most part, they stay on the futon behind me while I write, either sleeping or hanging on every word I say but when Schatzie gets it into her head she wants to play, well, it’s pretty hard to distract her from that. She’ll shove her toys (any toy) at me or toss it at me (believe it or not, she has good aim) or sweep her nose up under my hand so I’ll pet her.

Alexis: What was your first writer’s conference?

Marie:  My first writer’s conference was Desert Dreams here in beautiful Scottsdale, Arizona, back in 2002. Meeting authors for the first time was such a pleasure….I admit, I was such a fan girl (still am and I still love to meet authors!).  The whole experience was wonderful….so many people generously sharing their knowledge. Oh my gosh! I learned so much and I am so grateful.

Alexis: Speaking of fellow writers, what do you think everyone should know about your critique partner?

Marie:  I have two critique partners (I know! I’m so lucky!) and they are both wonderful. Warm. Beautiful, inside and out. Thoughtful. Truthful. Absolutely brilliant and so supportive.

Alexis: Wow. So what do you think everyone should know about your husband?

Marie: All my heroes are based on him. We’ve been together for a long time and he’s always supported my writing. He bought me my first electric typewriter way back in 1981. We were so young and just starting out and we really couldn’t afford it, but he believed in me….I used that typewriter for years!)

Alexis: Aw, that is so sweet. Of all the books you’ve written, which is your favorite character?

Marie: My favorite character? Well, one would assume it’s one of my heroes or heroines, but they’d be wrong. It’s actually Sarge, the dog from A Good Man For Katie. His traits and actions were actually a compilation of all the dogs I’ve loved and he was such fun to write.

Alexis: I absolutely loved Sarge and I'm a cat lover! Thank you so much for chatting with us today in addition to your regular posts here.

For a chance to win a copy of A Good Man for Katie, leave a comment for Marie below.

Excerpt from A Treasure Worth Keeping
Music, raucous laughter, and light spilled onto the street as soon as Tristan Youngblood, captain of the Adventurer, opened the door of the Salty Dog. He stood still for a moment and let the atmosphere of his favorite tavern in Charleston wash over him.
The Adventurer’s crew filled the room with the exception of Coop, who stood watch aboard ship, and Jemmy, Tristan’s son, who was too young to join in the celebration. A more trustworthy, patient, experienced group of men he’d never find. He loved and respected them all, found comfort in their company, and trusted them with his life—and his secret. To the world, he was Captain Trey, treasure hunter. To those who shared his confidence, he was Tristan Youngblood, Lord Ravensley.
They had reason to celebrate this night, even if he did not. After months and months of searching, they’d found the legendary lost treasure of the Sierra Magdalena, a Spanish galleon savagely torn apart in a hurricane almost two hundred years ago off the coast of Hispaniola. Each and every one of them thought they had found heaven—or at least a little part of it.
Pockets bulging with pieces of gold, they turned, almost as one, and raised their tankards toward him. “Captain!”
“Tippy.” He signaled the tavern owner. “Drinks are on me.”
Loud cheers met his pronouncement as Tippy lined up clean tankards on the bar and proceeded to fill them one by one with thick, foamy ale.
Tristan accepted his crew’s slaps on the back and handshakes as he made his way through the crowded room to drop a small pouch of gold coins on the bar.
Graham Alcott, the Adventurer’s navigator as well as Tristan’s second in command and oldest friend, sat at a table in the corner, his arms around the two winsome barmaids perched on his knees. A cigar smoldered in the brass tray surrounded by the remains of a hearty meal.
Tristan grinned as he strode toward his friend. It never failed. No matter where in the world the Adventurer put into port, Graham found the loveliest, most willing ladies.
He cleared his throat. Graham took his eyes off the tantalizing bosoms presented to him and glanced up. His smile could have charmed the birds from the trees—or the drawers from even the most discerning young woman.
“Tristan,” Graham acknowledged as he nodded to the chair opposite him. “Sarah, my love, get the captain a glass of your finest rum.” He gave each girl a sound kiss on the cheek and a promise to meet them later, then he patted both behinds to usher them off his knees. With squeals and giggles, the women rushed to do his bidding.
Tristan dropped into the chair and stretched out his long, leather-booted legs, crossing them at the ankle. He grabbed a serrated knife and cut a piece of bread still warm from the oven, then slathered it with sweet, creamy butter and took a bite.
“Well?” Graham prodded as Sarah delivered two heavy-bottomed glasses and placed them on the table. Tristan grinned as Graham’s merry brown eyes followed the gentle sway of her hips.
“Well what?” Tristan replied after he swallowed.
“Don’t play games, Tristan.” Graham rested his elbows on the table. “I’ve known you too long. I was there when Tippy gave you the letter. I know the family seal when I see it. Was it your father? Is he here?”
Tristan stared at the light amber brew in his glass as he chewed the last of his bread. “No, my father isn’t here. He sent his henchman, the honorable Theodore Gilchrist, Esquire. If we’d made port in Jamaica, I would have met Paul Farnsworth, another in my father’s employ. Apparently, Father has all my regular haunts covered. The earl was bound and determined to give me the news.” The information Mr. Gilchrist imparted made his stomach churn, made the bile rise in his throat, made him want to disregard convention and lose himself on the high seas. Brown eyes twinkling with curiosity, Graham sat up straighter. “What news?”
Tristan pulled a half-smoked cigar from his vest pocket and used the candle on the table to light it. As he exhaled, blue-grey smoke swirled to the ceiling. “I have a little less than four months to put my affairs in order, go back to England and then—”
“Then what?” Graham lifted his glass and took a long drink.
“I am to be married.”

About Marie
Marie Patrick has always had a love affair with words and books but it wasn’t until a trip to Arizona, where she now makes her home with her husband and two  furry, four-legged “girls”, that she became inspired to write about the sometimes desolate, yet beautiful west. Her inspiration doesn’t just come from the wild west though. It comes from history itself. She is fascinated with pirates and men in uniform and lawmen with shiny badges. When not writing or researching her favorite topics, she can usually be found curled up with a good book.

Alexis: Don't forget for a chance to win A Good Man for Katie leave a comment below.