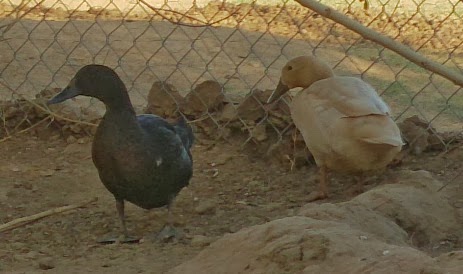 Well, it’s been a while since I’ve posted anything about our ducks, so I thought it might be time for an update.  For those of you who haven’t been following the story, we rescued a duck named Scooter, felt sorry for her being alone and adopted two more ducks—Tubby and Sunny—then Scooter got injured and we lost her, leaving us with Tubby (the duck commander) and Sunny (the faithful sidekick).  I think that pretty much brings you current.  Yeah, it’s the 20,000 foot view.  What’s your point?  Keep up, here, will ya?  LOL

Anyway, like I said, we have Sunny and Tubby, who seem to be happy as can be.  Sunny started out yellow and is now a very light brown…sort of a buff color.  He’s cute and completely devoid of any personality at all…but he’s faithful.  To whom?  Why, to Tubby, of course…he does whatever Tubby tells him to do and as I’ve told you before, Tubby has plenty to say.  In fact, she’s NEVER at a loss for words.

What?  How do I know Sunny is a “he” and Tubby is a “she”…well, that’s the easy part…I’m a romance writer.  What kind of romance writer would I be if I couldn’t tell the girl from the boy?  Honestly, keep up, people!  LOL  The truth is, Sunny and Tubby have become very good friends…and I mean very good.  In fact, it’s not an unusual occurrence in my neighborhood for me to walk out the back door and find my neighbor parked in a lawn chair in front of the duck pen.  The first time I found her there, it surprised me.

When she saw the confusion written all over my face, she grinned and asked, “Did you know Tubby is a girl duck?”

“Yep, she’s a girl…and Sunny is a boy and he really likes her.”

Then there’s the eggs.  Yep, for those of you who don’t know it, ducks lay eggs just like chickens.  My grandsons were totally surprised to find out ducks laid eggs and that you could eat them just like chicken eggs, so maybe you are too.  What we have learned is that the eggs are almost the same as chicken eggs, but not exactly the same…the shells are thicker and harder to crack and there is a membrane on the inside of the shell that you almost have to rip to get the egg to come out.  My son cooked duck eggs for the first time tonight and I caught him just as he threw the first two in the trash.  He thought the thicker shell and membrane and thicker texture of the egg itself was an indication the egg was old.  Nope…collected within the last 2-3 days, so it’s fresher than what you’d find in the stores.  Proves you’re never too old to learn something new.

No one will ever accuse Tubby of being overly maternal.  She lays her eggs everywhere in the pen and just leaves them lay right where they popped out.  She might pick the same spot 2 or 3 nights in a row and then you’ll find them somewhere new the next day.  She is now consistently laying 2 eggs a night.  Sometimes the eggs are together, sometimes one is in the same spot as the night before and the other is in a hole on the other side of the pen.  Sometimes it looks like she’s been digging a hole, trying to bury them, sometimes the eggs are just sitting out in the open on the ground like a rock, and sometimes the eggs are at the bottom of their wading pool.  Yep, you read that right…Tubby apparently is skilled enough at the egg laying thing now to pop those puppies out while she’s swimming.  I’m not sure if that’s a skill or a handicap but it’s intriguing as hell.  LOL


Well, that’s the update on the ducks.  They’re doing well…fat, sassy, happy, satisfied, and keeping my family in eggs...not to mention providing some life education for my grandsons.  LOL

Posted by Kayce Lassiter at 4:00 AM