Jillian Chantal Interview and a Giveaway! 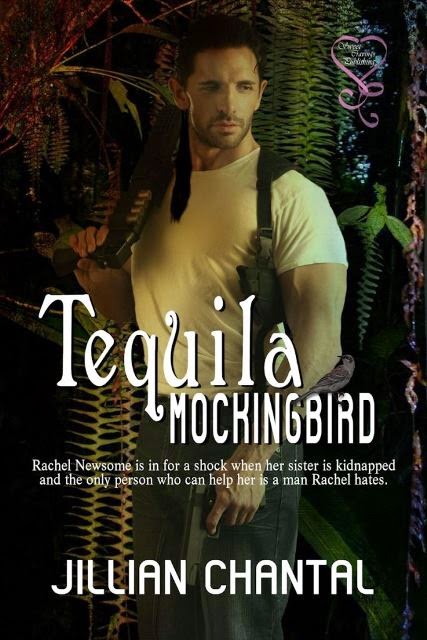 Alexis: Today we welcome Romantic Adventure author, Jillian Chantal and she's giving away an ecopy of Tequila Mockingbird! Leave a comment for a chance to win :-)

So Jillian, what made you choose such a cool title?

Jillian: Both of my sons had to read To Kill a Mockingbird when they were in high school (and we live about 2 hours from where the story took place).  Since we live in the south, sometimes we slur our words (gasp!). Each one of my sons would come in from school and say, “I have to read more of To Kill a Mockingbird tonight.” Funny thing is, they both slurred/said fast the first three words so what I heard was “Tequila Mockingbird” – try saying it three times quickly and listen to what you end up with.  This unintended change in the title of a serious book made me giggle.

I have a running list of titles I want to use someday and this went straight on that list where it sat for a long time. I took me a few years to get the story to go with it.

Alexis: That is too funny. What a great idea! Speaking of ideas, where did you get the idea for this story?

Jillian: When my older sister turned 50, she wanted to take an art cruise with this scrapbook artist she loves named Tim Holtz. She asked me to go with her. The cruise had three ports of call in Mexico. One of them was Puerto Vallarta.

I absolutely loved the way the downtown area of the city is right on the water and the way the city moves upward at a steep pitch toward the jungle. The way the landscape changed in such a short drive was intriguing. We went on an extensive bus tour and even passed the area where the film The Night of the Iguana was filmed as well as the house Liz Taylor stayed in while Richard Burton was filming (they were a great/crazy romantic story themselves).

I decided to set my story partially in Puerto Vallarta because I fell in love with it. It doesn’t hurt that they make tequila there, too. LOL. I decided to make the hero a DEA agent working undercover to shut down the drug traffickers moving into the United States. His code name is Mockingbird and he drinks the Patrón brand of Tequila. This tequila is made in Jalisco, the area of Mexico where Puerto Vallarta is located. I had finally found my story to go with that title I loved.

Alexis: How perfect. So glad you sister invited you on that cruise :-) What are your favorite traits of the two main characters?

Jillian: The hero has a quirky side as he has a pet iguana named Buttercup- he let the young boy next door name the critter. The hero is working with the young kids living in the area to try to keep them away from the drug trade.  I also love the relationship the hero has with his best friend. The best friend is a great guy and offers comic relief.

The heroine’s growth over the course of the book I’d have to say is my favorite part of her. She does undergo a great change. I also like that she’s not one to back down and can hold her own with the men in the story.

Alexis: What was the strangest thing that ever inspired a story for you?

Jillian: I’m not sure it qualifies as strange but I had a whole book I wrote recently (still polishing it for submission) based on one sentence I heard. I wrote that sentence down and it took me about a year to get a story to go with it but I finally did.  The sentence was “My sister was the first to die” and that is the first sentence of the novel.

Alexis: Oh wow! That was a good sentence to create a book over. I see that you are a patient person. Now for something completely different. What do you think everyone should know about your husband? 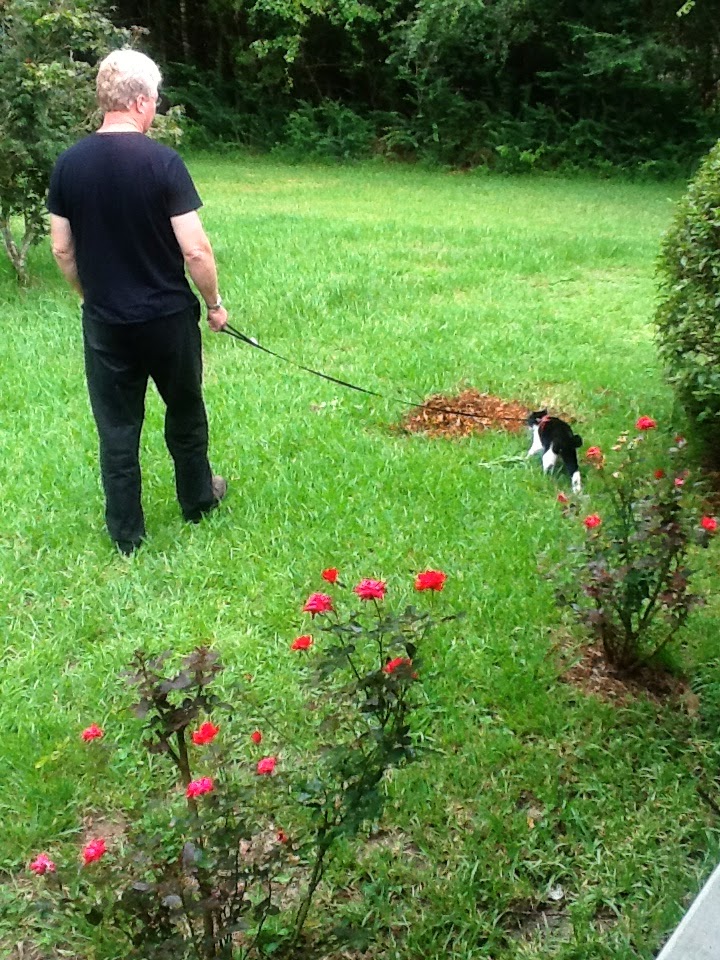 Jillian: He is a big ole softy when it comes to cats. We have a cat that he watches television with and that he takes on daily walks on a leash.  This cat is very dog-like (will fetch and bring you his leash) and when my husband comes in the door, the cat runs around his legs and bounces up and down to be picked up. It’s the funniest thing ever. They are very much a pair even though I am the one who rescued the kitty. They crack me up as they horse around the house together.

Alexis: I think I love your husband already ;-) Thank you, Jillian, for being on Happily Ever After Thoughts. Your story sounds great!

Check out this excerpt from Tequila Mockingbird:
A week after the fiasco at the bar, Rachel strolled down the corridor at the courthouse after her motion hearing concluded. Her briefcase bulged with the file from hell. This case would be the death of her. Both of her opposing counsels were named Michael but one went by Mike. They were also like little boys in a playground. She thought of them as two kids playing tug-of-war while she sat back on the swing set and watched the action. She was convinced that eventually she would win the case and it was just a matter of how bloody it would get between them before the final bell rang. Good thing she liked her client.

As she strolled alone she waved to several colleagues who passed by. She turned the corner. Up ahead she recognized several male lawyers congregated around the area near the stairwell. They were laughing and making a lot of noise. Her stomach clenched when she recognized one of them.

Orry Falco leaned against the wall with one hand in the pocket of his dress slacks. She’d seen him off and on in the courthouse in the two years since his brother Kes had jilted her friend at the altar and left town but the easy friendship of the past was gone. Kes had left a swath of bitter feelings in his wake and a lot of relationships changed due to his selfish actions.

Rachel hoped Orry wouldn’t notice her but no such luck. Almost as soon as she arrived at the stairs with the intention to sneak past the rowdy group, he turned. His eyes widened and he jerked his head back around.

Now a little peeved, Rachel wondered what the heck that was all about. Really? They couldn’t even be cordially distant now? He was going to flat-out snub her?

She stopped in her tracks and peered around his back to see who else was in the crowd. She sucked in a breath when she saw the profile of a buff man with a ponytail and a scruffy beard. Could it be the same man from the bar? The one she’d thought was so sexy getting into the cab?

The crowd parted and the man with the ponytail turned around. Rachel did gasp then. Loudly. She dropped her briefcase. It landed with an echoing thud at her feet.

“Rachel Newsome. What a pleasant surprise.” The tone of Kestrel Falco’s voice told her that he was anything but pleased. He bent down and picked up her briefcase. “Yours, I presume?”

She snatched it from his hand. “Yes.” God, he’d changed physically. He’d always been handsome but gone was the staid lawyer in the three piece suit with the short hair cut. In his place was a man in a pair of jeans and a white shirt who could be a god from Mount Olympus. He’d bulked up, his long hair in the ponytail was dead sexy and she didn’t even want to think about what the scruff on his face would feel like if she touched it.

“Most people would respond with a thank you.”

“Thank you.” She came back to herself and snapped the answer more harshly than she’d intended.

“Oh, dear. She didn’t sound very grateful, did she fellows?” one of the men in the crowd asked.

The rest of them all guffawed their agreement.

Rachel tucked the briefcase under her arm. “You all do know this is a courthouse, right? You’re all making way too much noise. This isn’t a bar or a men’s club.”

“Well, not to be mean Rachel, but it really is a men’s club. Or at least it was until you walked up,” one of the men she didn’t know said.

“How do you know who I am?” She asked the rude jerk.

“Everyone knows the ice princess.” He sneered.

“Ice princess? What does that mean?”

“It’s the reputation you have around here, Rach,” Orry said.

“And you know, princess, if it was truly a men’s club, we’d have some hot chick here half-naked, not a prissy stuck-up female lawyer who probably hasn’t been laid in five years.” The jerk lawyer stepped forward and into Rachel’s personal space.

Before she could react, Kes moved closer. “Cut it out, Jack. That was uncalled for and rude. Apologize to the lady.”

“Why should I? Why should you defend her honor anyway? Isn’t she Deidre’s pal?”

“She is but that’s no reason to be rude.” Kes’s voice lowered an octave, which actually scared Rachel. She’d never seen him so tense and wired. He acted as if he was going to lunge at the man.

Jack raised his hands in front of his face in a defensive posture. “Sorry Kes. I didn’t mean anything by it.”

“Don’t apologize to me. Apologize to her.” Kes, fists clenched, tilted his head toward her. “And you better be sincere about it.”

“I’m sorry I called you an ice princess, Rachel.”

Kes literally growled. He sprang forward. His brother grabbed him. “Let it go bro. He’s not worth it.”

About Jillian Chantal:
Jillian Chantal is the pen name of a lawyer who lives on the beautiful gulf coast of Florida. When she isn’t practicing law, she’s either traveling to fun places for inspiration, out and about with her camera taking photos or dreaming of imaginary worlds and creating romance novels with the required happily-ever-afters.  To find out more about Jillian visit:
www.Jillianchantal.com
https://twitter.com/JillianChantal
https://www.facebook.com/jillian.chantal?ref=tn_tnmn

Alexis: Don’t forget to leave a comment for a chance to win Tequila Mockingbird!
Posted by Alexis Walker at 7:00 AM