Guest Author Jane Leopold Quinn and THE LONG ROAD TO YOU 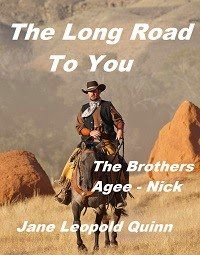 The Long Road To You
The Brothers Agee - Nick
by Jane Leopold Quinn
http://amzn.com/B00SX7AR5K

My two historical western releases are my homage to the western. Their inspiration came from my love of the TV western, The Big Valley. I was/am a Nick Barkley fan. For a while I monitored a fan fiction site relating to this show. Heath was the big favorite, Jarrod fans were strong, but Nick fans were loyal. That black clothing and especially the omnipresent black gloves were somehow sexy. In Nick's case, a black Stetson didn't make him the bad guy.

My first manuscript written was The Long Road to You, and it starred a hero named Nick. Around the same time, I was listening to an Andrea Bocelli CD, Sogno, and in particular the song, 'O Mare e Tu. Its haunting minor chords, the Spanish/Arabic/Gypsy sounds  put me in mind of the Flamenco. A young Anglo woman became my heroine, and she became the Flamenco dancer. You'd think a Mexican or Spanish woman would be the dancer, but I turned it around so the properly brought up and schooled American girl fell in love with the Flamenco, tried to break her bonds of propriety, and flee to escape the threat of an arranged marriage. This book became Jake and Ivy, the first in The Brothers Agee series.

Both heroes Jake and Nick were inspired, in part, by an incident in my husband's youth. The brothers were raised in an orphanage. Nick left when Jake was ten years old, and they rediscovered each other in Jake and Ivy. My heart ached for the young orphan boys.

After Jake and Ivy's happily ever after, Nick realized that he yearned to quit roaming, settle down, and find his own home. His visit to Jake's ranch brings along the discovery of the neighboring ranch owner, Margee McPherson. Margee's feistiness, independence, and beauty make Nick think of the life he needs now and how long the road has been to this place and time.

Blurb from The Long Road to You

Nick Gabriel, orphan, outlaw, reformed man, yearns for what his brother Jake has—land, a home, and best of all, a loving wife. Nick pulls a woman off a rearing horse, slamming her sexy, lithe body against his, the impetuous action setting him up to lose his heart.

Margee McPherson's whole world revolves around running the ranch her father left her and handling the creepy ranch foreman she also inherited. Years before, she'd made a mistake that ended tragically. Now, she won't allow the drifter cowboy, Nick Gabriel, to get anywhere near her no matter how tall, dark, and handsome he is, and how much she longs to be in his arms.

Both have secrets in their pasts. Will Margee's fear and guilt keep her from moving forward with her life? Nick's fallen in love with the beautiful rancher. Can he prove to her his roaming days are over? And will they survive their past secrets, finding the love they didn't know they craved?


A big man and towering over her, he was suddenly too close. She was right there, inches from him, so close his breath warmed her face. And God help her, she focused on his mouth and gave a strangled moan.

Her eyes narrowed, her lips parted, and she lifted a hand to trace his with a fingertip. She licked her lips anticipating the feel of his. Her body flooded fully hot, craving the need to be in his arms.

His response was lightning quick. Tightening his hand around her nape, slipping his fingers up through her hair, holding her head so she couldn't escape, his lips met hers. Her arms were trapped between their bodies. He arched his back and lifted his lips for a second. "Around me," he ordered. She obeyed and slid her arms around his waist. Their bodies slammed tightly together again. He took a deep, raspy, groaning breath, re-angled his head, and joined their lips again—hard. Hungry and frantic.

She nestled against him, shuddered and slid her arms up the middle of his back, pulling closer, then whimpering when his lips devoured hers. Every nerve in her body begged for more. More mouth. More him. He clamped his arms tightly around her. She felt his hardness and heat. He was obviously ready for her. Potently ready. She knew that much about men.

Tearing her lips off his, she gasped for breath. "Oh God." Making sharp little nips down his jaw and over his neck, she stopped at the top button of his shirt.

He slid his hand firmly over her breast, stroking the underside with the heel of his hand. Her heart beat franticly when he cupped her.

The heat of his hand surrounded her hard nipple. He compressed it between thumb and forefinger.

Suddenly he gripped her upper arms and gently but firmly pushed her back, his gaze questioning. "Margee, are you sure?"

"Wha…? Sure of what?" She hid her face in her hands, not realizing she'd started sobbing. "I'm so sorry." She had to get away as fast as possible. Running to her horse, she raced out of the meadow at breakneck speed through the thick-set trees.

Oh God, what have I done? She'd wanted his kisses, even his hand on her breast. Once you'd tasted pleasure, you never forgot it. It was wonderful. But wrong. And you couldn't forget the anguish either. But why had he stopped?

The Long Road To You available now at Amazon - http://amzn.com/B00SX7AR5K

Sensual fantasies were locked in my mind for years until a friend said, "Why don't you write them down?" Why not, indeed? One spiral notebook, a pen and the unleashing of my imagination later, and here I am with more than a dozen books published. The craft of writing erotic romance has become my passion and my niche in life. I love every part of the creative process — developing characters, designing the plot, even drawing the layout of physical spaces from my stories. My careers have been varied — third grade school teacher, bookkeeper, secretary — none of which gave me a bit of inspiration. But now I'm lucky enough to write romance full time — the best job in the universe!


Ellora's Cave
Lost and Found
The Real Deal
Indie
Valentine's Day
His, Hers & His
The Keeper
Soldier, Come Home
Winning Violetta
A Promise at Dawn
Jake and Ivy
Wooing the Librarian
Home to Stay
The Long Road to You
Siren
Undercover Lover
Mercenary Desires
I'll Be Your Last

Email ThisBlogThis!Share to TwitterShare to FacebookShare to Pinterest
Labels: Guest Author, Jane Leopold Quinn, The brothers Agee, The Long Road to You