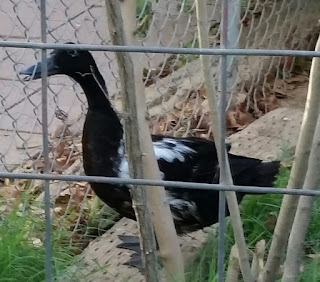 Well, it’s been a while since I first blogged about our little Duck Commander, Tubby, and someone asked me the other day for an update…so here it is.  Yes, I still have one duck left of the three I started with.  And if you remember, the last duck standing was actually a duck we bought at the feed store to keep a rescued duck company.  She’s a mostly a black duck with some white feathers.  She was supposed to be an all black duck with a green sheen to her feathers…something called a Cayuga Duck.  In the right light, you can see the green sheen on some of the feathers.  But who knows where the white feathers came from?  Apparently daddy wasn’t who everyone thought he was.  LOL
Just sayin…

Anyway, Tubby came to live with us as a companion duck back when my son and grandsons were all living with me.  Now everyone has moved on except one dog and the duck…they are both apparently stuck with me.  LOL  But they are entertaining, so there is never a shortage of laughs around them. 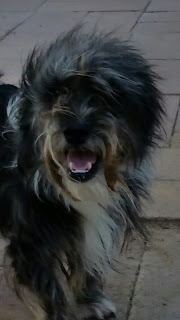 The dog is a little black terrier mix with an under-bite and a huge smile…and yes, he smiles all the time.  He is happy as hell and neurotic as all get out and a total control freak.  He will come to you to be petted and scratched on the belly, but only on HIS terms.  You have to keep one hand behind your back at all times and you can’t even think about picking him up.  If he detects the thought has crossed your mind (and he can), he runs like greased lightning and then taunts you by running circles around you just far enough out of reach that you risk putting yourself in traction if you try to grab him on the run.  So one day soon, I’m going to risk traction to  see if I can pin the little guy down and cut off the two dreadlocks that have formed on either side of his mouth.  Although, my fifteen-year-old grandsons thinks I should leave them because he thinks they look like a Fu Manchu moustache.  Funny how a Fu Manchu moustache makes actors look sinister, or like great thinkers.  The only thing it does for neurotic little Skay is make him look goofy.  LOL

So…back to the duck…I think where I left off with my last update was that Tubby was continuously trying to hoard eggs and sit on a nest in hopes of one day having offspring.  Well, that hasn’t changed.  She still hides her eggs way back under a big bush so they are impossible to get to on a daily basis.  Then when she accumulates ten or twelve of them, she starts officially “sitting” on the next.  That’s when my neighbor or I have to crawl back in there and clean out the nicely feathered and warm nest—before the eggs start to explode in our summer heat.  And Tubby still hasn’t learned to control her egg laying, so we still find the occasional egg at the bottom of the duck pool.  For the life of me, I can’t imagine how awkward it would be to suddenly have to lay an egg while swimming…but then that’s just me.  LOL

Tubby and Skay continue to play through the fence and we are now convinced that having grown up next door to the dogs, Tubby believes she is a dog.  She stands at the fence and calls the dog over to play with her and when he obliges, she sticks her beak right into his mouth and tries to grab his tongue while he pretends to bite her beak.  Total weirdness!  Then when it’s feeding time, she’s right there quacking and begging for her share of the dog food.  Yes, the duck shuns poultry food and begs for dog food.  She literally thinks she is a dog!

Now, the really strange and unusual part of this is the duck’s latest trick.  Somehow, we have acquired a rat problem outside.  ARGH!  These are not the usual packrats that you will occasionally find on a farm where grains are often stored.  These are the roof rat variety that probably came into the neighborhood on the fruit trucks.  But, in any case, everyone in the neighborhood is struggling to get rid of these suckers and I am no exception.  While I was out of town, the neighbor found a nest in my Bougainvillea.  Really?  Those suckers must have skin of leather to live in a hostile bush like that, but there you have it…rats in the tree.  This bush climbs the fence to the dog run which attaches to the duck pen.  So these suckers are helping themselves to the dog food (translation: duck food) and water in the duck pen. 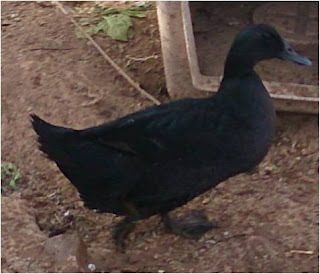 So one day my neighbor tells me that she’s seen the dog, Skay, trying to catch a rat and that he’s pretty good at it.  My first thought is eeeeewwww…stop that, Skay!  I don’t want him to get bit…let the traps do the work!  Then I remember that some dogs were actually bred to hunt rats…maybe we’ve finally found Skay’s skillset???  Well, we continue to work diligently to trap and eliminate the rats when the neighbor comes over again to tell me she found an almost dead rat in the duck pen.  Okay, nothing earth shattering about that except that the half-dead rat was in the duck’s mouth.  HUH?  Yep, Tubby had been watching Skay try to kill a rat, so when she found one of her own, she did what any self-respecting guard dog would do…she grabbed it by the tail and started beating it against a railroad tie.  Now that’s a damn duck!!!

So here we are, our little band of weirdness, ensconced in our castle fighting rats in the mote.  But we are happy, healthy, guarded, and well-fed.  And yes, Tubby can have all the dog food she can eat.  Hell, any duck that can kill a rat can have my food!