Interview with Cassie Ryan and Giveaway 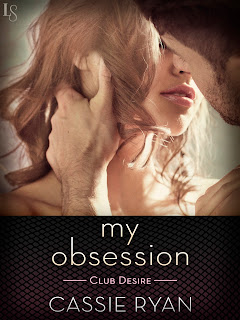 Welcome Cassie. What has been the most memorable fan comment you ever had?

Cassie: I had a fan approach me at the last Romantic Times conference I attended in 2009.  She gushed over my Cassie Ryan books (the hot ones!) and told me that they were a wonderful combination of Sherrilyn Kenyon, Sylvia Day, Cheyenne McCray and Nora Roberts.  Wow!  Can you say fan girl moment??  No – me, not her!!  What writer wouldn’t want to be compared to any of those terrific ladies!!  All writers I respect and enjoy!  Cheyenne is the only one I know personally and am lucky enough to call a good friend, but I tell her all the time I want to be her when I “grow up” :)  I still get goose bumps when I think about how I felt at that moment, and how that reader looked at me as she begged me to write more books!  I don’t think there’s much higher compliment you can get out of a reader than to be compared like that!!

Alexis: Wow, what a wonderful compliment! That would give me goose bumps too. So we know what your fans think about your writing, what does your family think of your writing career?

Cassie: It’s funny, growing up, all my teachers told me and my family that they wouldn’t be surprised if I ended up writing someday.  I even had a high school Accelerated English teacher tell me that I was a great writer but if I ever hoped to be published I would have to stop writing all the dark stuff and tone down the sarcasm.  I haven’t seen or talked to her since graduation, but she would probably shake her head to know that all of that stuff was really what I’m known best for, in my Tina Gerow pen name at least.  Okay, some in the Cassie Ryan books too!  But somehow I don’t think any of my family is surprised that I ended up writing erotic romance – or what so many just call “smut” :)  I used to take that personally, but now I sort of think it’s a compliment.  And I take my smut or kink very seriously!!

Two of my sisters think it’s great that I’m a writer and don’t blink an eye at my subject matter. The third I suspect has quite a few blinks at the subject matter but is fine with me being a writer. My husband is very proud of what I do and has no problem telling all his friends and coworkers to go and buy my books.  My son is also quite proud and gleefully tells people I write porn!  I’ve tried to break him of that habit, pointing out that my books don’t have pictures in them, but I think he likes the shock factor it has.  Smartass! :)

My Mom insists that she wants to continue to think of her baby as innocent and sweet, even though she knows full well that ship sailed long ago!  When my Dad was out visiting from Ohio a few years ago, he attended a writing panel with me where readers were asking questions.  One of the readers asked the panel what our parents thought about us writing “smut.”  When it came to me to answer I told her she should ask my Dad since he was in the front row.  My smartass Dad stood up and shrugged and said he didn’t think it was all that racy.  I laughed and told him I now knew what kind of sick bastard he was!  He laughed back and said, “You’re welcome. Where do you think you GOT that sick mind from?”

Alexis: I think it’s fantastic you have such a supportive family. Especially your husband and son since writing does take time away from family sometimes (especially around deadlines). How long did it take you to write your most recent release? Why?

Cassie: It took me well over a year, and not just because it takes me longer to write a book since my brain blowout than it did before.  I used to be able to write a book in 4 months if I had to.  Now I would guess the “had to” would be more like 8 months and the stress alone might shut the pissy brain down for a while.  But this one took even longer.  Why?  Well, Sue Grimshaw approached me at the local Desert Dreams conference and asked me if I was still writing erotic books and then told me about the Loveswept line she was editing for at Random House, and asked me to submit.

To say I was excited would be an understatement.  I had met Sue back when I was with the small press publisher, Triskelion, and Sue was the book buyer at Borders.  I only met her once at a writers conference and was shocked she even remembered who I was!  But excited, too!  I was also excited about the prospect of writing for Random House – I mean, who wouldn’t be???

So after my wonderful hubby laughed but told me in no uncertain terms that while he was proud of me and my writing and would always support me, he would NOT visit a local dungeon with me so I could research for my book, I dove in to research, reading, interviewing, etc., to find out what the actual lifestyle is like!  Not the Hollywood version we’ve all seen and heard about.  I still haven’t made it to a local dungeon, but maybe the BMG’s (my critique group) will go with me!  Only to watch!  Although I’ll admit, if I was still in my 20’s and a wild child I might dive into much more than that…LOL!  But for now – I think our group consensus would be just to watch!  It wouldn’t be the strangest thing we’ve done in the name of writing research, after all! :)

Alexis: I love research. Just sayin’ ;-) What do you think everyone should know about your critique partner?

Cassie: I am so lucky to have several critique partners!  My critique group is called The Butterscotch Martini Girls (the BMG in the above).  They include such terrific ladies as Kayce Lassiter, Lisa Pietsch, Tia Dani, HD Thompson, KT Roberts, and our honorary member because we love her madly, and all want to be her when we grow up, is Cheyenne McCray.  The BMG’s as we call ourselves were started in August 2003 by Brit Blaise, and we were all unpublished at that point and grew as writers together until we are ALL multi published.  We recently lost Brit to breast cancer, but we miss her dearly, and carry on the BMG’s, as we know she would’ve wanted.  In fact, whenever I’m tempted to get down on myself or wonder if a book is going to be good or not I can hear her voice in the back of my head telling me to get to work!  That I always worry about it mid book and it always turns out well!  And damn if she STILL isn’t right! :)  I love each and every one of these ladies!  We’ve been through a lot together over the last more than a decade both writing related and not.  I’m so blessed!

Alexis: The BMGs are awesome but then again so is your husband! What do you think everyone should know about your him?

Cassie: My husband is amazing.  I know most women say that about their husbands but mine truly is.  I was a cougar before it was cool, so he’s my boy toy…er….9 years younger than me and a damn sexy man that it’s very easy to base my heroes off of!  He doesn’t read my books – not because he’s not proud or is ashamed of what I write, but he just isn’t a reader.  He’s even tried to listen to audio books and he just can’t get through them.  He gets something of an input overload and has to stop.  But he’s very supportive, loves all my writing friends and has even gone to and worked at writing conferences that I was attending.  He never balks at any money I need to spend for promotions, conferences or even girls writing weekends away.  He’s also a techie – so patiently and valiantly fixes my laptop, iPhone or any other tech stuff that I have that malfunctions, which it does often.  He’s convinced I have a weird magnetic field around me that causes that stuff to go haywire, but he just kisses me, takes the malfunctioning technology away from me and brings it back fixed.  He’s a gem!  And besides that he’s a wonderful father and still loves to make me laugh!

Alexis: Thank you Cassie for coming to visit Happily Ever After Thoughts. It was so great to have you! Now I need to tell everyone about the giveaway.

Be sure to leave a comment or question for Cassie and someone will be randomly drawn to win a copy of her latest ebook My Obsession. Check out the blurb!

Blurb of My Obsession

As a teenager, Brent Weston was a nerd. Now he owns the hottest dungeon in Phoenix, enjoying the power and success he’s always craved. All that’s missing is the right woman to share it with. Then one day Sandra, his secret high school crush, walks into his club. She’s just as beautiful as he remembers. She’s also scared as hell. Brent has been waiting for this moment, and now that Sandra’s in his sights, he’ll do anything to protect her, pleasure her—and prove that he’s the only master worthy of her devotion.

My Obsession is intended for mature audiences. Includes a special message from the editor, as well as an excerpt from another Loveswept title.
Buy Links:
Amazon:
B&N:
iTunes:
Kobo:
Penguin Random House: