Tina Donahue's COME AND GET YOUR LOVE and a Giveaway! 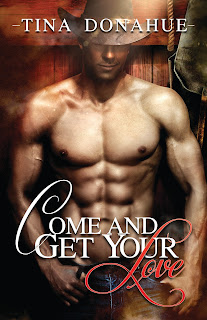 Come and Get Your Love
By Tina Donahue

Their desire wasn’t supposed to be real…

With millions willed to her in an incentive trust, Lissa can get the dough to start her own country music label when she meets one of the no-contest clauses. Namely, reach middle age in twenty years, work in the hated family business for a decade, or marry someone not in the music biz.

Marriage it is, at least for a year to satisfy her greedy brother who wants the inheritance.

Enter Cass, a hot Texas rancher who dampens Lissa’s panties. With a pile of medical bills from his brother’s accident, Cass agrees to wed Lissa. She’s sweet to look at, surprisingly pleasant for an Atlanta debutante, and makes his jeans feel tight as hell despite their no-sex contract.

Uh-huh. The devil’s in the details. Longing gazes turn to tender intimacy and wild nights with pretend feeling all too real.

Damn shame it may be too late with her brother gunning for them both.

Excerpt from Come and Get Your Love

Cass had expected to be somewhat jittery today, but his anger with Willy was still fresh enough to have calmed his nerves, though not his thoughts. As the Wedding March swept through the gigantic space, Cass wondered if Willy would say or do something to hurt Lissa.
I’ll pound you into the ground if you try.
It’d be more entertainment for the six hundred or so guests.
They oohed, then ahhed at the ringbearer who tripped, the flower girl who wet her panties halfway down the aisle, and a dozen bridesmaids dressed in filmy lavender gowns who grinned as if their lives depended on it. So much for having a small affair. Marvella and the rest of the bridesmaids had walked slowly, each of them taking Cass in as if he were on the auction block. Some of them eyed him so much they made this the longest damn wedding he’d ever suffered through.
Patty must have thought the same. She hung on to one of the chairs while her gaze whizzed around the room decorated with more flowers than a Texas politician’s funeral.
Cass would have given a few years of his life for some fresh air and a faster pace to these proceedings. After what seemed like hours, it was time for the main event. A hush fell over the guests as Willy stepped into view. Cass glared at the man, warning him to be nice or risk death.
Curling his upper lip, Willy held out his arm for Lissa.
A moment passed, then another, and still more with her nowhere in sight. She couldn’t have changed her—
No, wait. There she was.
Cass lost every bit of air in his lungs. Dear Lord, her hair was beyond glorious, curling this way and that, free and loose just as he’d wanted. Thank you, sweetheart.
He couldn’t look at her dress enough. White as a cloud, it sparkled each time she breathed.
Although Lissa’s veil hung over her face, he could see that her gaze was down as Willy delivered her to his side…for safekeeping and a lifetime of what should have been love. Cass took her hand gently in his, surprised at how icy her fingers were.
Lissa lifted her face.
At that moment, Cass knew he wanted her completely, mindlessly, passionately; hell, he might even be falling in love. This was a woman he ached to share time with—all the good, even the bad—didn’t matter.
Her expression softened; it yearned as much as his.
Cass smiled.
Uncertainty, then something he couldn’t read passed over her face. She turned away.
His stomach fell. He wanted to ask what had just happened, what the problem might be, besides this nutty wedding. He needed to know if she’d ever want him as her real husband or even for a couple dates, but couldn’t get into that now. The minister had already started.
His words sounded cold, no different from the contract Cass and Lissa had signed. How careful they’d been, spelling everything out, except what they should do about a wayward heart.
Cass’ beat out of control, yet he said his vows in a surprisingly strong voice and then eased his mother’s ring onto Lissa’s finger, warming her hand with his own.
When it was her turn, she claimed that she’d love him for all time, then slipped a gold band onto his finger. A warning to the world that he belonged to her now.
As crazy as it was, Cass suddenly wanted that.
The ceremony continued, for days it seemed. He felt as if he’d been doing this all of his life. Finally though, the minister shut up for a few seconds, broke into a broad smile, and said, “You may now kiss your bride.”
What remarkable words those were, filled with such beauty and promise. With great care, as if he was exposing Lissa’s soul, Cass eased the veil from her face.
He saw her flash of desire, followed by more uncertainty, maybe fear. Why? He’d never hurt her.
Cass cupped her beautiful face in his hands. His work-roughened thumbs stroked her velvety cheeks as he lowered his mouth to hers. This time, he kissed Lissa with tenderness, respect, and patience.
She was his wife and deserved the best. 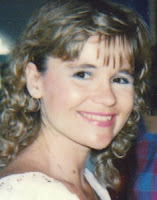 I’m an award-winning, bestselling novelist in erotic, paranormal, contemporary and historical romance for Kensington, Samhain Publishing, Ellora’s Cave, Siren Publishing, Booktrope, Luminosity, and indie. Yay! Booklist, Publisher’s Weekly, Romantic Times and numerous online sites have praised my work, and trust me, I’m forever grateful for that. I’ve had my books reach finals in the EPIC competition, one title was named Book of the Year at a review site, and others have won awards in RWA-sponsored contests. I’m actually featured in the 2012 Novel & Short Story Writer’s Market. Talk about feeling like a freaking star. Before my writing career, I was the editor of an award–winning Midwestern newspaper and worked in Story Direction for a Hollywood production company. Outside of being an admitted and unrepentant chocoholic, I’ve flown a single-engine plane (scary stuff), rewired an old house using an electricity for dummies book, and have been known to moan like Meg Ryan in When Harry Met Sally whenever I’m eating anything Mexican or Italian. Yeah, I like to eat (burp).

Email ThisBlogThis!Share to TwitterShare to FacebookShare to Pinterest
Labels: Come and Get Your Love, Free books, Guest Author, Tina Donahue