Interview with Anna Small and a Giveaway! 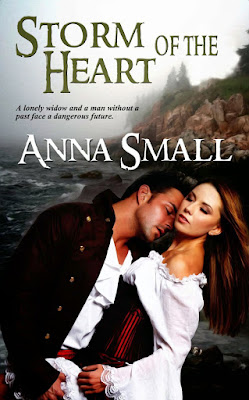 Alexis: Today we have Historical Romance author, Anna Small, and she is giving away an ecopy of STORM OF THE HEART, so be sure to leave a comment below for a chance to win!

Hi Anna, when did you know you wanted to be a writer?


Anna:  I’ve been writing stories since I was very young. My first attempt at a novel was in 7th grade, about a dog who was half-wolf and escaped to Alaska! I was always making up stories for my younger sister, and we would write out and draw stories we came up with together. I lived in England during my high school years and, one summer, decided to write a “love story” about an English pirate and a French governess, set during the French Revolution. It ended up being about 350 pages, and I wrote another book when I went back to school in the Fall. By the time I graduated college with an English degree, I had completed 4 historical romance novels!


Alexis: Wow, that says a lot about your time management skills! Which authors inspire you?


Anna:  I stopped writing once I had kids, but still missed it. One day, a friend gave me Diana Gabaldon’s OUTLANDER, and her writing and the characters reminded me how much I loved writing. I joined RWA again and started going to meetings. A year or so later, my 7th romance novel I’d ever written, was published by The Wild Rose Press.


Anna: It usually starts out in a flurry of ideas. I will start to play with either a character or theme or a scene – sometimes it comes from something I saw in a movie. There is literally a whirlwind of pictures and dialogue and plot points that swirls around for a bit, and I immediately scribble them down in bursts and bits. I do this for about an hour, detailing character descriptions, key scenes, dialogue, setting, conflict, etc. Once I have it safely out of my head and into the laptop, I can take a breath and go back to it later!


Alexis: What are you working on now?


Anna: I usually work on several things at once, so I have probably four or five novels in various states of completion. That’s how I avoid burnout or writer’s block. Somehow, I never get characters or plots confused and am able to jump right into any novel and pick up where I left off. Currently, I am almost done with the first book of a new Regency historical romance series, and have the second book started. I pitched these at the RWA conference in NYC this summer! The third was scribbled down in the way I mentioned above, and as I get ideas for it, I write them down. I also have a contemporary/paranormal erotica that’s almost done, and a Viking era-set novel. And then there’s my western series I want to finish….


Alexis: I can tell you are at no loss for ideas :-) What has been the most memorable fan comment you ever had?


Anna: I offered to critique 20 pages of a manuscript for my online chapter, The Beau Monde, as a fundraiser and was very surprised to hear that I had actually been bid on. The winner was an aspiring author who, it turned out, had read all my books and was a fan. I had no idea until then that I actually had fans out there! So that was thrilling to receive her enthusiastic letter and hear how much she loved my books.


Alexis: How fun. What was the first romance you ever read?


Anna:A historical romance called KATHERINE, about Katherine Swynford, the mistress and later wife of the enigmatic John of Gaunt, the grandfather of Henry V. Imagine my surprise when I researched my husband’s English ancestry and found out that he is a direct descendant of John and Katherine!


Alexis: That is quite a coincidence. What has been the best piece of advice you ever received for your writing career?


Anna: Take your time and never submit your manuscript until you know it’s ready!


Alexis: What was the funniest thing you did wrong when you first started writing?


Alexis: Ugh :-) What was your first writer’s conference?


Anna: The NJRW conference, probably around 1992. I met Nora Roberts, who was our speaker, and bumped into a hunky cover model who was also a speaker. When I bumped into him, he looked down at me and smiled…and I literally felt a blush run from my toes to my ears! So I love writing about that deep, all-over body blush in my books, because I know it can happen.


Alexis: Thank you so much for visiting with us, Anna. It was great having you on Happily Ever After Thoughts.


For a chance to win an ebook copy of STORM OF THE HEART, leave a comment below.


Excerpt from STORM OF THE HEART


The moonlight only emphasized her loveliness. He brushed a tangled strand of hair from her wet cheek, and her eyelids fluttered. Her lips parted with a gasp, and he wondered if she kissed her ghostly husband in her sleep. Before he could stop himself, he gave in to his pent-up frustration and longing and brushed his lips across hers.


He expected her to sink back into the bedclothes, dead asleep, or, worse, wake up. Instead, her lips quivered against his. Her arms tightened around him, sliding up to grip his shoulders. The pads of her fingers dug into his back. He couldn’t help himself. He deepened the kiss, aware of his rising ardor, but unable to contain it. She twined her fingers in his hair, pulling her to him with an urgency he didn’t want to fight. Every fiber of his being vibrated with sparks ignited by her kiss. His muscles weakened with each passing moment, as did his resolve to leave in the morning. How could he sneak out of the cottage like a criminal, when she was so alone, so desperately alone?


He would have to go soon, regardless. His presence was too much of a risk for her. For himself, he cared little. But he could not put the burden of harboring an enemy upon her.


He broke the kiss gently so as not to awaken her. Cradling her in his arms, he lowered her to the pillow and pulled the quilt up to her chin. He kept watch by her side to ensure she didn’t have another nightmare, but she slept heavily. She resembled an angel in sleep, with her golden hair tumbled across the pillowcase. In sleep, she was more the young woman he sensed dwelled beneath her daily sorrow and mournful burden. It was a shame, truly a shame, that she could not cast the burden aside and give her heart again.


Despite the almost painful urge to hold her through the night, he pulled up a hard-backed chair and sat beside her. He did allow one indulgence, which was to take her hand from the coverlet and hold it lightly. Her fingers closed around his.


Just before dawn, he staggered from her room and unpacked the flour sack of Caleb Quinn’s belongings before falling into a dead sleep on his pallet. 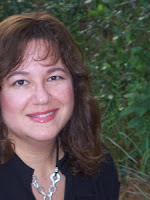 
Growing up in England fostered my love of history, and I spent many happy weekends wandering the gardens and salons of stately homes and castles, imagining the people and events that used to be. Now, my romance novels are set in the old American West, the rocky shores of Maine, the French countryside, and many more to come. My sources of inspiration are limitless – I only wish there were more hours in the day!

I'm a member of Romance Writers of America and its Florida chapter, Sunshine State Romance Authors, as well as the Beau Monde Regency chapter. STORM OF THE HEART is my sixth published novel. When I’m not writing, I enjoy scuba diving with my family, traveling, boating, scrapbooking, reading, and quilting.


Alexis: Don’t forget to leave a comment for a chance to win STORM OF THE HEART.
Posted by Alexis Walker at 7:00 AM